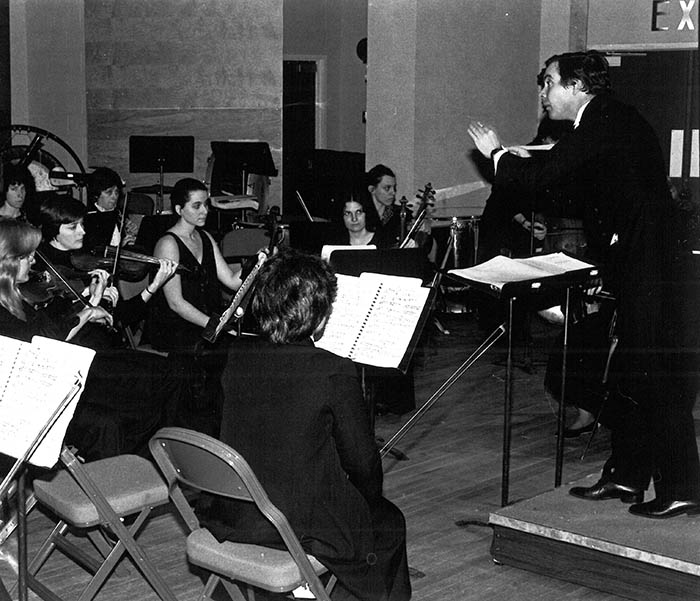 Any tears shed following longtime Stony Brook University conductor David Lawton’s final opera performances on April 28 and April 29 were no match for those that Lawton himself cried as a 5-year-old while attending a dress rehearsal of Johann Sebastian Bach’s Mass in B Minor conducted by his father.

“During the final chorus I began to weep because the music was so unbearably beautiful I didn’t ever want it to end,” he said. “My father was a very fine choral conductor and I learned an immense amount from attending his rehearsals at an early age.”

For Lawton, 76, his glorious 49-year run at Stony Brook may be ending but his concert baton will not be stilled just yet.

Fortunately, there was no room for Lawton’s emotions to cloud his thoughts during those final Stony Brook performances. “Conducting is a very demanding activity — physically, mentally and emotionally — and requires complete focus on the music during the performances,” he said.

There will be no easy chair or conventional retirement for Lawton though, who will immerse himself in a number of major research projects already in progress. As a Verdi scholar, Lawton is in demand. “I’ve been asked by some European publishers to write some more articles on various subjects pertaining to Verdi,” he said.

And Lawton will continue to conduct an orchestra of which he has been a part for the past 20 years — one that convenes in Vermont at summer’s end. The group, known as Music House Party, is a mix of professionals and “very skilled amateurs,” and has been in existence since before World War II. He also presides over the Occasional Opera Company, a group also composed of professionals and amateurs, which presents readings of operas with full orchestra and chorus but no staging once a year in New York City. His next project with that company will be Mozart’s Idomeneo in March 2019.

“Music was always my greatest inspiration, so I’m not surprised I’m still doing it, and I plan to continue to do so for as long as I am physically and mentally able to,” Lawton said.

Lawton said that he is honored to have played a significant role in a department that has grown from “very modest beginnings to become a world-class music department.”

“We have built an outstanding faculty and have attracted top students, primarily through word of mouth, specifically from former students who have encouraged their friends and students to apply to our program,” he said.

As Department of Music chair from 1996 to 2000, during a period of great financial austerity, Lawton made two faculty appointments of which he is especially proud: vocal coach and conductor Timothy Long and harpsichordist Arthur Haas, one of the most sought-after performers and teachers of Baroque music in the United States today.

A pair of milestones for Lawton were the first performance of the University Orchestra, which he founded in Fall 1969 when he arrived at Stony Brook, and the first performance of the Opera Workshop, which he founded in Spring 1970 with Professor John Newfield of the Theatre Arts Department, who retired at the end of the 1969 to 1970 academic year.

Lawton said he is indebted to Newfield for putting him in touch with the late Tom Neumiller, who joined the faculty of the Department of Theatre Arts around the same time Lawton did. The two men went on to run the Opera Workshop as a joint endeavor between Music and Theatre Arts for many years. Later, after the Staller Center opened, they began a fruitful collaboration between the Department of Music and the Staller center for their opera program.

“The first show that we presented on the Main Stage, Mozart’s early opera La finta giardiniera, took place before the theater seats had been installed. The audience brought its own cushions,” Lawton said.

Of his many honors, Lawton is proudest of the Claude Palisca Prize bestowed upon him in 2005 for his critical edition of Verdi’s Macbeth.

In the performance arena, Lawton counts conducting Italian tenor Carlo Bergonzi in a concert performance of the American premiere of Verdi’s early opera Il Corsaro at both Stony Brook and at The Town Hall in New York City to rave reviews in the New York musical press, as a high point of his career.

But Lawton said that the most demanding opera he ever conducted was his Stony Brook colleague Sheila Silver’s Thief of Love, which premiered at the University. “The musical language of this opera was quite difficult in terms of its modern harmonic language and complex rhythm,” he said.

What advice does Lawton give today’s music students who aspire to conduct? “They should study composition, which is vitally important to the understanding of how music works, how it is put together,” he said. “Conductors should be proficient in at least one instrument and piano is a vital tool for learning scores. I think experience playing in an orchestra is essential as is singing in a chorus.”

Asked what the average concert-goer doesn’t realize about a conductor, Lawton said, “I think the best conductors develop a relationship with an orchestra that make the players realize that he or she trusts them, by treating them with respect, and valuing the approaches that they bring to their own playing.”