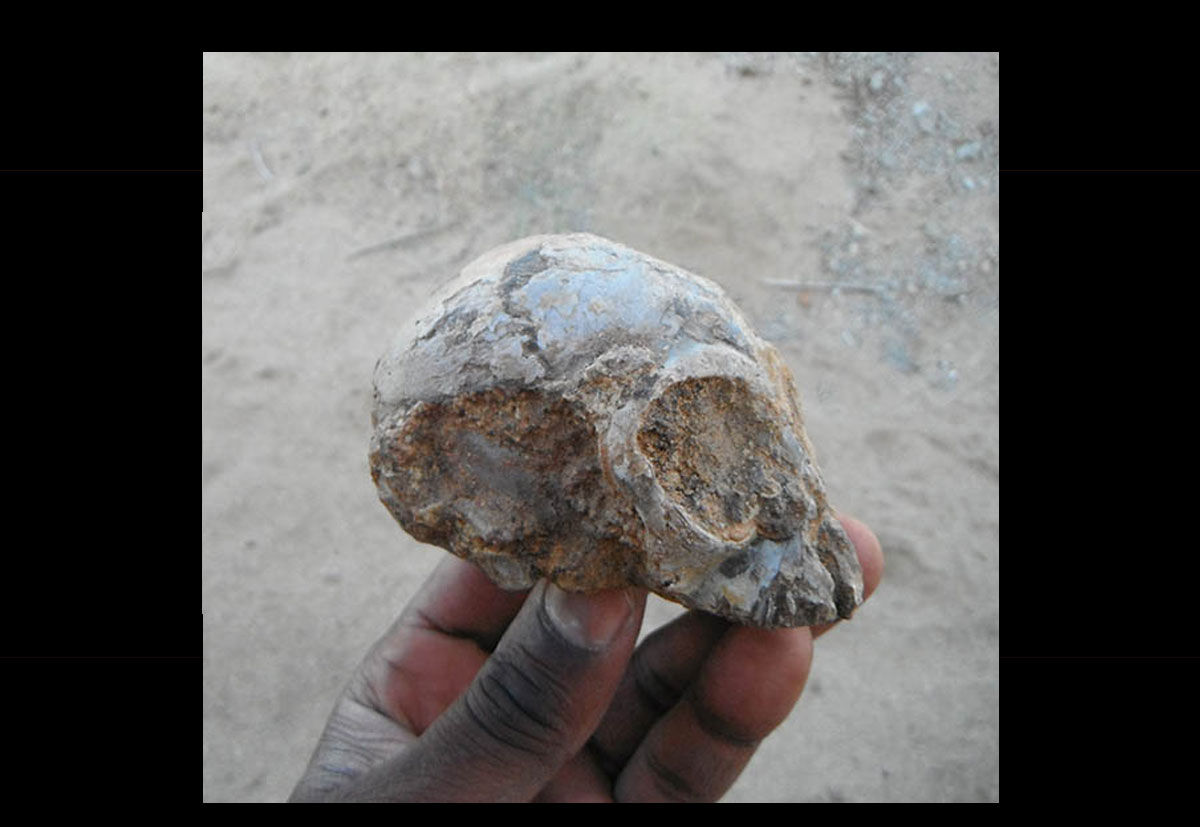 For Stony Brook researcher Isaiah Nengo, paleontology is a lot like gambling. Many long days of field work in Kenya’s arid and barren Turkana Basin reveal very little. Most of the time, Nengo walks away empty-handed.

But at night, he’s constantly thinking about what the next day might hold. He’s drawn back to the basin day after day in search of clues about the area’s ancient past.

“We’re trying to reconstruct the ancient landscape — to bring it back to life. We want to know what the landscape looked like, what the vegetation was like, what animals lived there, what kind of climate there was,” said Nengo, an assistant research professor in the Department of Anthropology in the College of Arts and Sciences, and associate director of the Turkana Basin Institute (TBI), a research and educational facility in Kenya.

Nengo’s team made history in 2014 with the discovery of a 13 million-year-old toddler ape skull, nicknamed Alesi after its scientific name Nyanzapithecus alesi.  Unearthing Alesi’s skull opened a world of new possibilities for research, along with scores of questions.

As they begin the second phase of Alesi research this year, Nengo and his colleagues will study the skull in search of clues about Alesi’s locomotion, diet and life in the unusually warm Miocene Period. Alesi’s species is now considered a common ancestor for apes and humans, and learning about its ability to thrive in a warm climate could play a key role in adapting to today’s climate change.

Founded in 2005 by renowned paleoanthropologist Richard Leakey, TBI facilitates research and education in paleontology, archeology and geology in the Turkana Basin of Kenya. The goals of the institute include building and maintaining two field research facilities surrounding Lake Turkana that operate year-round to support research and educational activities, including field schools. Stony Brook University serves as the academic base affiliated with the TBI, providing facilities and support for lectures, outreach, and fundraising activities; an academic home for students from America and Africa; and Internet library access for the research centers at Turkana.

“When Richard Leakey proposed the idea for TBI, he wanted to partner with an internationally-renowned university. Stony Brook was a natural fit,” said Lawrence B. Martin, director of TBI. “We now have four faculty members recruited specifically for TBI. They’ve made a huge impact with starting major field research or analytical programs. These are world-class researchers, but also dedicated educators. More than 100 undergrads have been able to go out and participate, which encourages creative thinking and innovation.”

The Institute’s appreciation for imaginative thinking is essential to learning more about Alesi, his relatives, and the time in which they lived.

Using the skull as a guide, researchers are hoping to reconstruct many traits of Alesi’s species, including when they were weaned and how old they were when they had their first babies.

The Miocene Period, which began 20 million years ago and ended five million years ago, was one of the warmest eras on record. For that reason Nengo believes it can provide important insight about current global warming trends.

“We believe that the spike in temperature [during the Miocene Period] played a significant role in shaping how the plants and animals evolved,” Nengo explained. “The idea that climate change in the past 10 decades was influenced by humans is generally accepted now. So now that we’re past that debate, we’re asking, what’s going to happen? How will life adapt?”

“One way we can explore that is to see if there were other periods where warming happened, and how life responded — which lineages survived and which did not, and why,” he added. “In the middle of the Miocene, there was a very rapid warming period caused by a natural increase of carbon dioxide. And it’s very similar to what we’ve seen in the recent past.”

The team is working with an international coalition of scientists and a group from Hamilton College in Upstate New York to drill deep into the area’s Rift Valley. They will extract a column of earth that will be about a mile long when the project is completed. Studying the soil and rock in the column will provide data about the planet’s prehistoric development, climate changes, and the creatures that lived in the area.

“The Turkana Basin is one of those unique places where you have a fossil record that stretches all the way through the Miocene Period,” Nengo said.

TBI brings Stony Brook’s breadth of resources and expertise to bear on a local level, collaborating with and supporting nearby Kenyan schools.

“We’re telling the story of every human, of how we came to be,” Nengo said. “We think it is very important that the tellers of the story are also represented — that we not only have Americans telling the story, especially since a lot of the records come from Kenya. We try to make it as inclusive as possible.”

Nengo has long supported diversity in the field, bringing minority students from his former teaching positions to the basin in an effort to internationalize. Recently, TBI signed a memorandum of understanding with a Kenyan university founded in 2017 to provide post-graduate courses in archeology.

Once the accreditation process is complete, Kenyan students will have the opportunity to attend courses taught primarily by Stony Brook faculty, including Sonia Harmand, Elisabeth Hildebrand and Jason Lewis. Faculty from universities elsewhere in the United States, Europe and Kenya will teach additional courses.

“The students will get the best of everything — highly-trained instructors from very broad backgrounds — essentially a Stony Brook education without leaving Kenya. I can’t think of anything better,” Nengo said.

Martin praised Nengo for his commitment to TBI’s students and progress in Kenya.

“Isaiah is running two of the most important research projects we have going, and he was the first black Kenyan to earn a Ph.D. in paleontology,” Martin said. “He has a depth of knowledge about Kenya that those of us who come from other places wouldn’t have. In many ways, he’s a senior figure and having him involved is an encouragement to other Kenyans to get involved with developing the scientific enterprise of their country.”