Undergraduate Researcher is Fired Up About Safety 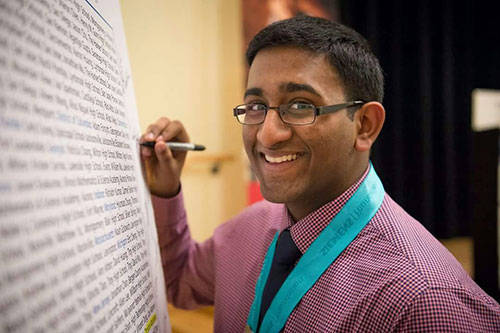 Christin Abraham ’19 is tackling a burning issue. Since his junior year in high school, the Pelham, New York, native has been collaborating with a friend, T.J. Hurd, to improve the fire-resistant properties of household objects.

The pair were recently named finalists in The Paradigm Challenge, an annual event created by The Paradigm Project and one of the largest youth innovation competitions in the world. Christin and T.J. were among the top 100 entries from a pool of 50,000 students.

Christin, a double major in the College of Engineering and Applied Sciences’ chemical engineering and applied mathematics and statistics programs, and his scientist-partner began their collaborative research with a small-scale experiment to find the most effective disinfecting wipes to clean keyboards.

As part of their Pelham Science Research program, the two began sleuthing for research opportunities throughout Westchester County, enduring many rejections until they found a connection at Israel Chemicals Limited, a company located in Ardsley, New York, that works with polymers, flame retardants and nanotubes.

To prevent or minimize damage by house fire, many household items, such as couches, drapes, carpets and electronics, require the use of chemical flame retardants.

“Unfortunately, many of these retardants can be quite toxic and have been linked to thyroid cancer, neurological disorders and other medical issues,” said Christin.

To counter that negative effect, Christin and T.J. use halloysite nanotubes, which absorb and contain the toxic chemicals the flame retardants contain.

Although the high school lab partners now attend different colleges, they share their findings over video chat and Google Docs.

In The Paradigm Challenge, the project with the most votes receives $5,000. The voting period lasts until August 30. You can see and vote for Christin’s entry here.

Any prize money that Christin receives will be invested in further research and possibly defray his tuition costs.

“I am humbled that our project has been selected for The Paradigm Challenge. I am extremely grateful for the opportunity to work at Israel Chemicals Limited, the connections I have made at Stony Brook University, and for the knowledge and skills I have gained from lab and from various competition,” said Christin. “Research is a huge part of who I am and fortunately, I attend one of the best public research universities.” 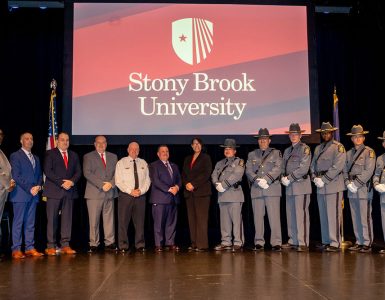