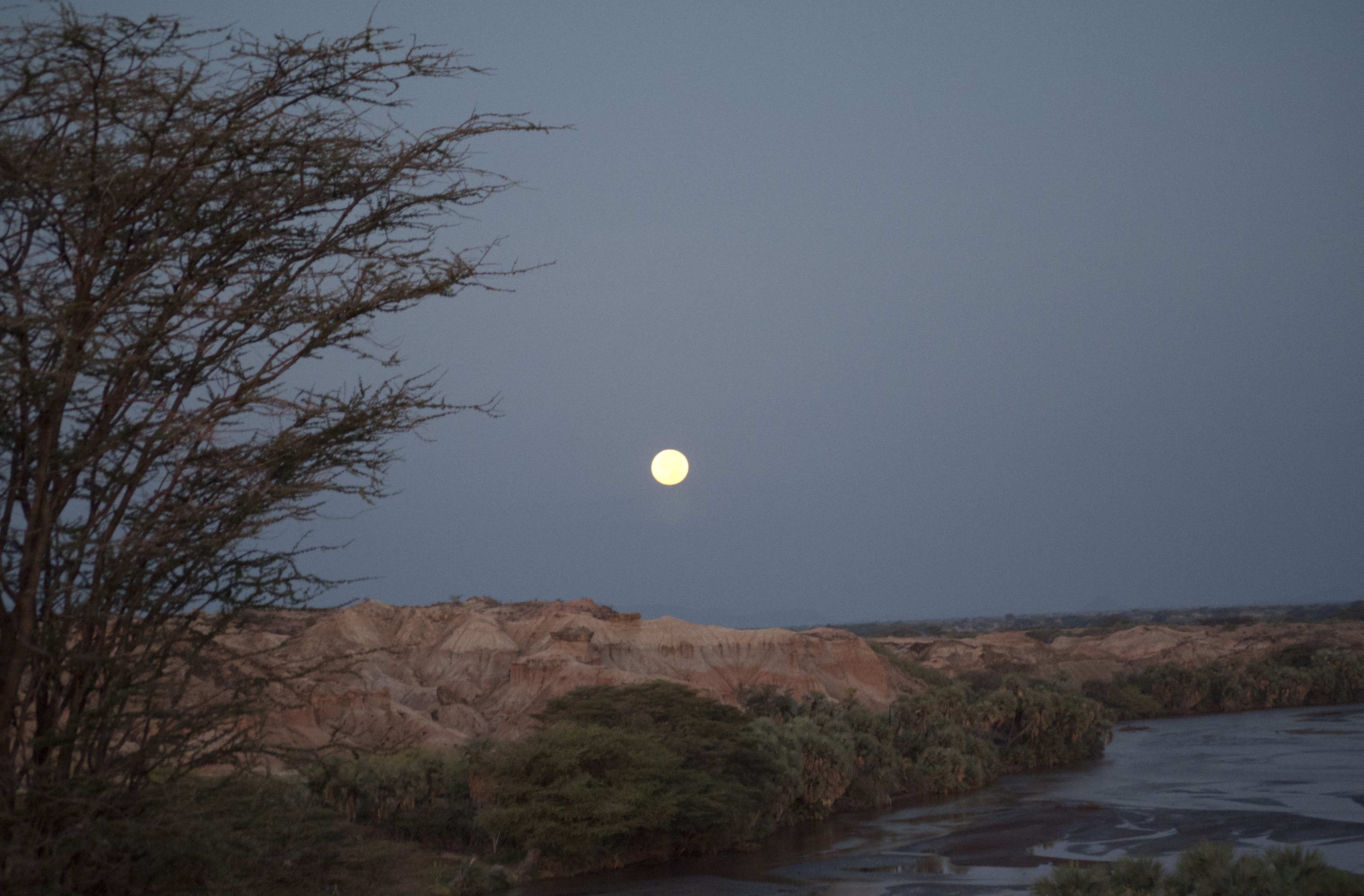 On January 5—the day that Provost Dennis Assanis announced that Lawrence Martin would step aside as Dean of the Graduate School and Associate Provost in order to take on a full-time commitment as Director of the Turkana Basin Institute (TBI) in Kenya—10 poetry students and four staff members from Stony Brook Southampton’s MFA in Creative Writing and Literature were already two days into the first-ever 10-day Turkana Basin Writers Conference.

The conference was developed from an idea that Martin passed on to Associate Provost Robert Reeves almost two years ago, when Reeves was still the Director of the MFA in Creative Writing program at the Southampton Campus. Whiting Award winning poet Julie Sheehan, named the new Director of the Southampton MFA program in 2011, was the leader of this year’s conference in Turkana.

As the Provost noted in the announcement of Martin’s transition, “With the completion of state-of-the-art field stations at TBI-Turkwel and TBI-Ileret, Stony Brook is in a position to lead the world in field and laboratory studies of primate and human evolution and to be a host of very broadly conceived human-related fields such as Climate Science, Ecology, Geology, Linguistics, and Paleontology. In addition, the infrastructure provided by TBI can facilitate an array of multi-institutional and multinational collaborative research programs in areas such as Energy for the Developing World, Water to Support Human Life, International Health, Climate Change, Migration and Poverty.”

Assanis pointed out that prior to assuming his administrative role, Martin had built an impressive record of both field-based and laboratory research and scholarship in physical anthropology and is regarded as one of the leading authorities on the evolution of apes, and the origin of humans. Having been at the center of TBI’s initial phase of development, Martin is “particularly well-suited,” the Provost said, “to shepherding the Institute in this next phase of expansion.”

Part of that shepherding appears to be establishing connectivity between some of the fields already being explored at Turkana and other disciplines with more of a liberal arts orientation, in order to contextualize and correlate some of the scientific discoveries and information coming out of fieldwork and research at TBI. The first Turkana Basin Writers Conference is a perfect case in point.

As paleoanthropologists like TBI co-founder Richard Leakey look back more than 2 million years to try to trace and understand the origins of language in the earliest humans, in the Kenya of today the spoken word tradition of storytelling and performance continues to be as vital and vibrant a part of the culture as it has been for thousands and thousands of years, even as it evolves along some branches into more modern forms of rap and hip hop.

So it made perfect sense when Martin suggested to Robert Reeves that Stony Brook’s connection to TBI (as co-founder, institutional parent and administrator) presented an unparalleled opportunity for writers, not only to visit and take in the many wonders of Africa, but to have boots on the ground in the place where language most likely began and where the spoken word and oral tradition still hold sway in the creative process.

Recently dubbed a member of the “Poetry Pantheon” by The New York Times Magazine and featured in a Henry Louis Gates, Jr. profile in The New Yorker, Holman has previously been crowned “Ringmaster of the Spoken Word” (New York Daily News), “Poetry Czar” (Village Voice), “Dean of the Scene” (Seventeen), and “this generation’s Ezra Pound,” (San Francisco’s Poetry Flash).

From slam to hip hop, from performance poetry to spoken word, Bob Holman has been a central figure in the reemergence of poetry in our culture. The series he produced for PBS, the United States of Poetry, features more than 60 poets. And his new series for LinkTV, On the Road with Bob Holman: A Poet’s Journey Into Global Culture & Languages, is focused on endangered languages around the world.

Sheehan, who has known Holman for years, knew that he was the perfect person to get involved with the first Turkana conference, both because of his professional achievements and interests and his charismatic personality and “cultural ambassadorship.” He has long been interested in spoken word trends and traditions, she said in an interview after her return from Kenya, and he has become “more and more interested in folklore and oral tradition, internationally in different cultures and how it plays out in contemporary poetry in the U.S.”

“Plus he’s just one of these incredible, open, immediate personalities,” she said, “who can talk to anyone while wearing a stylish pork pie hat.”

Bill Burford said that Holman is the kind of person who “can make friends with people instantly even if neither he nor they speak a single word of each other’s language.”

When they arrived in Kenya on January 3, Sheehan noted that they were met at the airport by people that Holman “had already reached out to: local hip hop artists, rappers, poets and singers, along with a local ‘poetry activist,’ which is what Bob describes himself as.”

They were also met at the airport by Richard Leakey, whom Sheehan described as a polymath. In addition to his formidable reputation as a paleoanthropologist, politician and conservationist, she said, he is interested in other things. He not only talks the talk about sustainability, he is committed to the concept to the point that he walks the walk, even though he has to make his way on artificial limbs, the result of a plane crash he survived in 1993, to do it. He installed solar power in his compound early on, and still refuses to go on the grid. He was told he could never make a vineyard work in that climate and soil, but he has succeeded in establishing one at his compound.

In informal talks with the poets while they were there, he sketched in the fundamentals of his theories about evolution and about language and a possible idea about its origins. In Leakey’s view, the development of language seems tied to biological imperatives. It started because walking on two legs made humans more vulnerable: if anything happened to either leg, unlike quadrupeds, a human was out of commission.

Language developed so others in a group could take care of vulnerable members, which would include nursing mothers and their babies. The oversize brain and large size of the cranium to contain it in mature humans meant that babies had to be born relatively undeveloped, essentially premature, so their progress through the birth canal would not fracture the pelvic basket.

Because of the imperative of caring for those in a group who were not mobile, he suggested, language developed in line with the concept of altruism and the need for a future tense: “I will go to the river and get water and I will bring it back here for you.” In a creative loop, language allowed for the expression of empathy, and empathy begged for the development of more language.

For her part, Sheehan conceded that she knew next to nothing about the oral traditions of East Africa, so she knew her workshop “would have to be about elements you could borrow from their tradition and put in your own process and see what happens.” Because of their Western background and tradition, she knew it would not be the same as being an oral poet, but she hoped the students would learn what it’s like to work in that approach, as a person who creates without committing anything to the page.

“In a place like that,” she said, “you’re dealing with oral dimensions and the sound dimensions of language and poetry. This is about pure sound: Everything you see and hear, expressed through sound.”

By the end, she said, the poetry process was collaborative: “writers” became “speakers” who never wrote down a single word, and listeners vocalized their responses instead of writing down their reactions.

“It was a process of discovery for the poets,” Sheehan said, “with Bob Holman there to help parse elements of the oral tradition.”

To say that the first Turkana Basin Writers Conference was a success would be an exercise in gross understatement. In a letter to Robert Reeves after her return, Betsy Bonner summed up the reactions of the poets who made the trip:

” . . . Home not quite a week, I am still a mental traveler in Kenya. I believe you are aware that I stayed on for a safari after a terrific and mind-bending time in Turkana. I am looking over my notes and beginning to write about my experiences, and first and foremost must thank you for planting them in the first place, let alone bringing them to fruition. Your Julie Sheehan, Christian McLean and Adrienne Unger are rare breeds of magnificent, as teachers and in their own creative endeavors; and as pragmatic, helpful, friendly travel partners. Lord knows what our communion with the Turkana people would have been without Bob Holman, but I don’t think it could have been more deeply felt. Bob is a loving, warm, good spirit, greeting everyone with a big smile and laughter, encouraging our freedom to laugh at ourselves. Bill is a most knowledgeable and valuable resource for literary presentation, and had us whistling while we worked. Richard is the mad, eccentric genius I expected—while defying expectation at every turn. He made us examine the people, landscape and ourselves the way writers must: just what the hell we were doing there? Is this any way to begin a new year? Writing in a desert whose harsh terrain can only be tempered by the great beauty of the night?

What an astonishing, unforgettable trip. I am thanking my lucky stars the journey continues . . .”