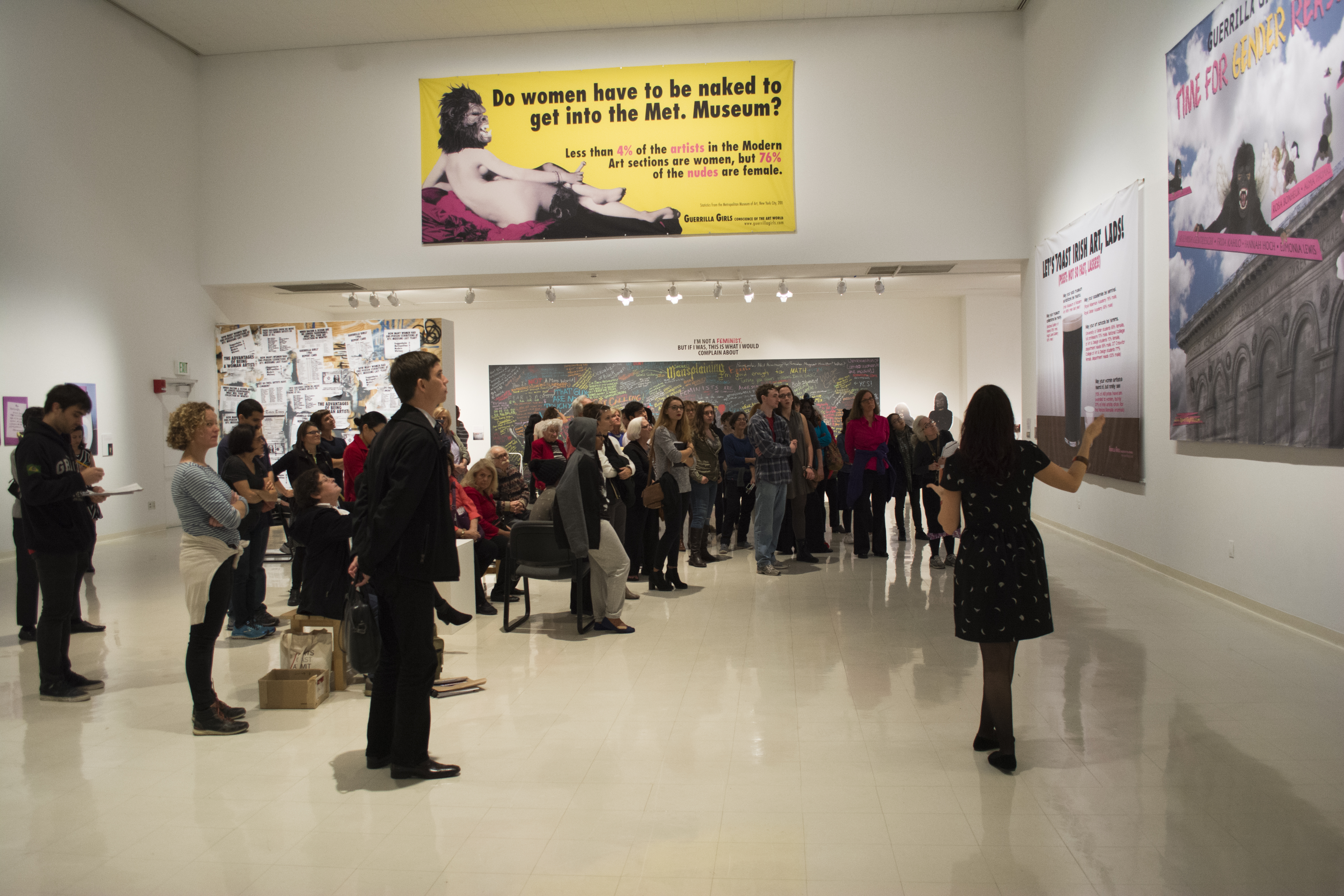 The Guerrilla Girls, a group of provocative, anonymous female artists on a mission to fight sexism and racism in the art world drew a crowd of more than 200 people to Stony Brook University on Thursday, October 13 for an Artist Talk at the Charles B. Wang Center.

The talk complemented their current exhibition, “Not Ready to Make Nice: Guerrilla Girls in the Artworld and Beyond,” at the Paul W. Zuccaire Gallery located in the Staller Center for the Arts. The exhibition is a major presentation of both their past and present works, including very large billboard prints and interactive installations.

Inspired by the lack of female artists featured at an exhibition at the Museum of Modern Art in 1984, the Guerrilla Girls formed, putting up poster campaigns before moving on to large scale art projects. They work anonymously, wearing gorilla masks and using the names of famous female artists who have died. Their art advocates for feminism and several forms of social change.

“We started putting up posters on the street and people actually responded really well to them so we kept going. We created a dialogue about issues of diversity in the art world, and here we are 30 years later,” Frida Kahlo, one of the Guerrilla Girls, said.

One of the Guerrilla Girls’ most famous pieces shows an image of a nude woman lying seductively with a gorilla mask covering her face. The words, “Do women have to be naked to be in the Met. Museum?” appear in large bold font above her.

The piece still resonates with people today, as the Guerrilla Girls constantly update a striking statistic shown on it regarding the Metropolitan Museum of Art. Currently, it reads, “Less than 4% of the artists in the modern art section are women, but 76% of the nudes are female.”

“The feeling is, in 2016, that all the problems are solved — that women have equal opportunities and equal access and they’re not being denied. But the truth is that the numbers don’t add up,” said Karen Levitov, director and curator of the Zuccaire Gallery. “The Guerrilla Girls use statistics from museum websites and from other sources to look not just at the art world, but beyond the art world, and women artists are not represented in museums or galleries as much as male artists.”

Students have given the exhibition a lot of attention, reacting strongly to the social messages displayed through the art. A chalkboard installed in the gallery encourages students to share their thoughts based on the prompt, “I’m not a feminist, but if I were, here’s what I’d complain about.” Within a week, the board was so full of comments, Levitov’s team at the Zuccaire Gallery had to expand it by 8 feet.

“The Guerrilla Girls are saying something in a very loud and courageous way that a lot of people are too scared to say,” said Neysa Page-Lieberman, executive director and curator of the Department of Exhibitions and Performance Spaces at Columbia College Chicago, who curated the Guerrilla Girls exhibition. “These kinds of messages about discrimination and power are something that everybody can relate to some aspect of their lives.”

Another interactive part of the exhibition provides Post-It notes for viewers to write on and post to a wall of love and hate mail the Guerrilla Girls have received over the years. This gives viewers a chance to share their own reaction to what people are saying about the Guerilla Girls and their art, and be part of the conversation.

“You don’t realize how far sexism reaches, you just think about sexism in terms of the things that get the most publicity — like sexism in science worlds, sexism at home, sexism in the professional world. You don’t think about it in art,” said Jessica Merrell ‘17, writer for the Stony Brook University Chapter of Her Campus. “I think it was very interesting and very enlightening because I didn’t know this was an issue until about like two days ago, but now I do.”

The exhibition fits into the context of Stony Brook University’s Plan for Equity, Inclusion and Diversity, giving representation and a voice to women artists and women in general on campus.

“I think that the HeForShe movement at Stony Brook and the gender equality initiatives happening here affect everyone, and I think that’s one way that the Guerrilla Girls are really relevant,” Levitov said. “They’re saying feminism isn’t just for women — it’s for everyone.”

“Not Ready to Make Nice: Guerrilla Girls in the Artworld and Beyond” is on display at the Zuccaire Gallery until October 22 — stop by before it closes and join the conversation on gender equality in art. Visit zuccairegallery.stonybrook.edu for more information and check out a video of the talk below.

Joshua Pietzold ’18 is a journalism major interning with the Office of Communications and Marketing.