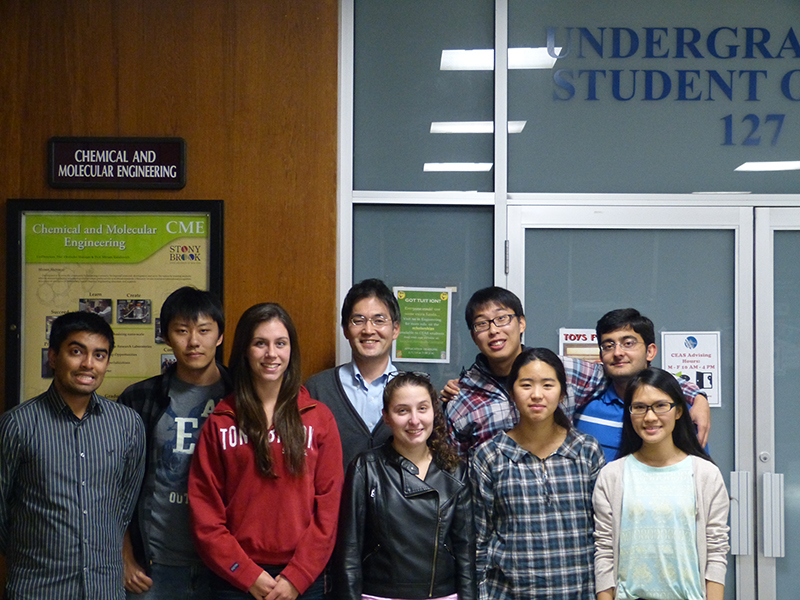 The competition is fierce and the rules are simple — build a scale model car powered solely by chemical reaction, on a $1,200 budget. Having done that, a team of five Chemical and Molecular Engineering (CME) senior students, members of the American Institute of Chemical Engineering Club (AIChE), traveled across the country to compete at the Chem-E-Car nationals in San Francisco on November 3.

Out of 25 entrants, they finished 12th — while not as high as they hoped for — it is considered excellent for a first-time showing. In addition to the five competitors, 11 of the club’s registered 30 members made the trip to the nationals.

What makes the club’s achievement even more impressive is that when new faculty member Taejin Kim of the Department of Materials Science and Engineering took over as its advisor, the club was loaded with individual talent but lacked motivation and a sense of how to work as a team. In the process of building the car the students coalesced to create a synergistic environment. “The combination of their intellects and their collaborative relationships helped us achieve advancement into the nationals,” said Kim.

Club captain Weida Zhang of Fresh Meadows, New York, instituted a policy that at least one other member of either the club’s executive board or the leadership of the car team must verify any major decision. “This also builds effective two-way communication that is essential to success in any relationship,” he said. “Many times, working together as a team proves to be more difficult than actually building the car.” Team members Shiplu Raman, from Astoria, New York; Stephanie Song, from Forest Hills, New York; and Andrew Sung, from Oakland Gardens, New York; rounded out the competition crew.

About six months before the conference, team members began assembling their shoebox-sized acrylic car using a hydrogen fuel cell to provide electricity to the circuit and motor. But the car’s braking mechanism is also triggered by a chemical reaction that is timed. For that, the team used an iodine clock reaction. “The two clear chemical solutions that we start with are mixed together,” explained Zhang. “After a period of time, depending upon the concentrations of our reagents, the solution turns black, blocking off the light to our photo resistor and shutting down the car.”

The unknown that separates the chemical engineers of tomorrow from their fellow contestants is finding out the payload and distance the car must travel an hour before the competition. “This kind of critical thinking forces us to be prepared for unpredictable situations that may arise and organize a response around such situations,” said Zhang. “We prepare for this by testing our car’s timing mechanism extensively, so we are able to adjust the amount of time the car needs to run. In San Francisco we noticed that there was a slight decrease in our speed due to the arched and uneven floor. So we made modifications on the spot.”

What drives these chemical engineers to travel to the opposite coast for a one-day event?

“We hope to achieve a name for our school at the national competition,” said Zhang. “Many engineers from the industry do not know that Stony Brook University has a chemical engineering program, so we want to change that and help bring speakers for the Stony Brook American Institute of Chemical Engineers chapter and recruiters for the CME students.”