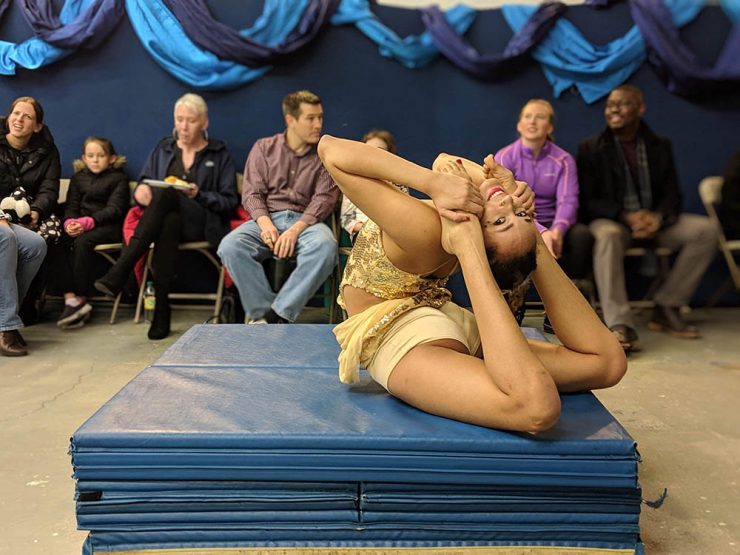 People who know Stony Brook University political science major Tara Evans may find it hard to decide which of her talents is more extraordinary — her ability to contort her body into unnatural positions or her remarkable capacity for learning languages.

A circus performer who speaks 11 languages, Evans ’22 is on a seemingly mainstream pre-law or pre-med track, depending on the results of her upcoming MCAT and LSAT exams. But that may be the only aspect of her life that is ordinary.

A self-described nomad who was diagnosed with Autism Spectrum Disorder (ASD) at the age of 16, Evans can physically bend in ways most people can only dream about. Her exceptional flexibility enabled her to become a competitive gymnast between the ages of 4 and 17. Then, four years ago, she enrolled in preprofessional ballet classes.

“As a child, I was always climbing on things, jumping off of them, yanking my leg behind my head — you know, normal Tara stuff,” she said.

She was going through her regular stretching routine during ballet class when her instructor said to her: “With that kind of flexibility, you would be an excellent contortionist.”

Evans dismissed it until later in the class when her instructor again brought up the topic of her flexibility. Evans had become disillusioned with ballet because “the toxic diet culture” wore heavily on her, she said, so she decided to leave it behind. However, she didn’t want to lose her skills, so she sought out an unlikely source to stay fit: a pole-dancing studio.

It wasn’t long before she became enamored of the aerial hoop.

“Due to my not being social at my last school, and because of my autism, I was worried people at Simply Circus might not like me,” she said. “But when I walked in, there was a moment of silence as seven people stared at me blank-faced. I quietly said, ‘I’m here for the open gym to work on contortion and hand balancing.’ One person came up to me and greeted me with the first kind smile I had gotten in more than a year.”

That was the day that Evans’ life changed. Simply Circus founder Steven Santo nurtured Evan’s natural ability for contortion as she built up strength to perform hand balancing and aerials. Ever since, the aerial hoop has been her go-to apparatus.

She was soon ready to perform, and when she wasn’t attending school, she toured with the circus up and down the East Coast, mostly on weekends.

Evans said she fell in love with living out of a suitcase and a nomadic lifestyle partly because it fed her love for learning other cultures and languages — a passion that began in grade school with mandatory Spanish classes and continued with French in middle school and Mandarin in high school.

Since then, Evans has added German, Russian, Danish, Polish, Japanese, “sub-par Korean,” Navajo and even Klingon — a language based on the TV show Star Trek — in varying degrees of written and verbal fluency. Her next challenge is Tagalog, the tongue spoken in much of the Philippines.

“It may seem odd that someone with ASD can speak 11 languages, but one of the things characterized in the diagnosis of ASD is something called special interests,” Evans said. “Languages and culture qualify as my special interests; I have a hyper fixation on them and because I learned by myself how to speak 11 languages, I was able to adapt and learn easily. It also helps that my memory is eidetic.”

When a college she was attending in Massachusetts closed, Evans learned that Stony Brook University offered robust pre-law and pre-medicine programs. She researched further and discovered the university’s strong international flavor, which resonated with her.

Transferring to Stony Brook was a no-brainer for her. During her studies, Evans learned that Native American languages and cultures are disappearing, so she dedicated herself to learning Navajo and its culture with the hope of perpetuating it.

As for learning Klingon, Evans picked it up during her quarantine for COVID-19.

“Since I was bored and had nothing to do other than Zoom classes and at-home circus training, learning Klingon was like my little break from it all, and it’s also super fun to speak,” she said. “But no one really speaks it, so I can’t practice with anyone.”

So how did Evans pick up so many languages?

When she attended her previous college, she would visit Duolingo, a language-learning website and mobile app, after classes and teach herself new words. Once she mastered them, she graduated to phrases and sentences.

Evans would like to continue learning about the world from a medical perspective, perhaps as an orthopedic surgeon, or from a legal one, possibly as a prosecuting attorney.

But until then – immediately following graduation, when she hopes the world opens up in a post-COVID landscape –  Evans said she wants to take a short break from the rigors of academia. She hopes to resume her semi-nomadic lifestyle for a while and apply to Cirque du Soleil as a hand-balancing contortionist and aerialist.