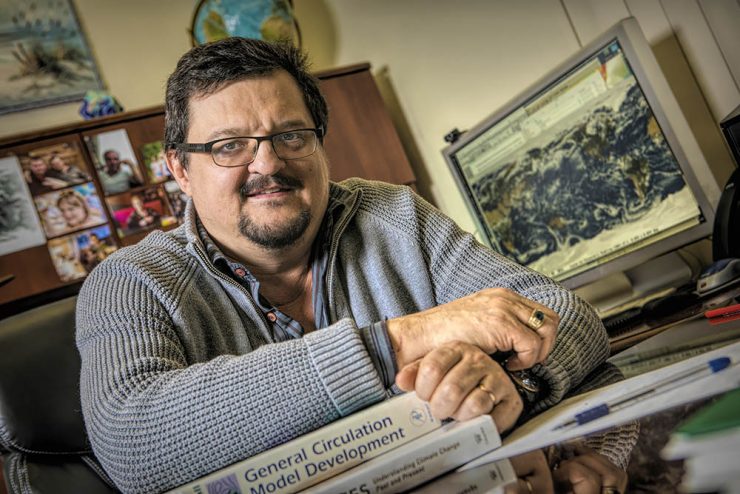 One of Stony Brook University’s Institute for Advanced Computational Science (IACS) core faculty members from SoMAS (The School of Marine and Atmospheric Sciences) — Marat Khairoutdinov — has created a global cloud-resolving model (CRM) that was favorably compared to other models in an international effort known as the DYAMOND project, used to assess the current state of the art in global cloud-resolving simulations.

Using one of the most powerful supercomputers, Khairoutdinov and his students hope that their research will help foster understanding of how future climate change will affect Earth.

In late 1991, Marat was a young research associate pursuing his PhD at the Central Aerological Observatory (CAO) near Moscow in the former Soviet Union when the USSR collapsed. Salaries and funding for science were already in steady decline in the USSR and his promising career was suddenly uncertain.

Armed with a Masters of Science degree in physics from Moscow Institute of Physics and Technology, Phystech, which Kahiroutdinov describes as the “Soviet version of Caltech,” the young researcher would benefit from a twist of fate. His then director attended an international conference as the coup in Moscow was taking place and met Khairoutdinov’s future PhD advisor in the U.S., Yefim Kogan, who needed a few students to work on new grants. The director recommended Marat as student candidate.

Marat arrived at the University of Oklahoma in July 1992 and graduated with a PhD in meteorology in December 1997. Following graduation, he became a successful research associate at Colorado State University from 1998 to 2007, when he applied for and was accepted for a professorship at Stony Brook.

We asked him to simplify his groundbreaking work and passion, which focuses on the role of clouds in the global climate system.

Q: Serendipity played a part in your life and career more than once. In addition to the recommendation that made it possible for you to study in the United States, a chain of random events also led you to become an atmospheric scientist? Can you share how that happened?

A: I was a student at Phystech when one day I bumped into a college buddy of mine who had just landed a part-time research position at Central Aerological Observatory (CAO) , which was one of the leading organizations in the field of applied meteorology in the former USSR. My friend also mentioned that there might be more positions available. I applied right away and got a part-time position in CAO’s Laboratory of Numerical Modeling of Clouds. CAO had a few large computers, which were quite powerful for those days. My job was to run and improve a state-of-the-art cloud model developed by my new boss. So, in order to better understand the model, I had to educate myself on cloud physics and meteorology. I found the field very computationally challenging, as cloud models are some of the most expensive models to run on a supercomputer even today. I got so fascinated by the cloud modeling that I started to develop my own cloud models, and switched my physics major to meteorology.

Q: What made you so passionate about clouds?

A: I like to model clouds using powerful supercomputers, because clouds are very important for global climate and it is largely uncertain how clouds would react to the climate change due to anthropogenic increase of greenhouse gases such as CO2. Although to the general public clouds may seem very simple, almost trivial, ‘fluffy cotton balls’ in the sky, in reality they are driven by rather complicated physical processes and have complex interactions with their environment and these processes are difficult and challenging to model. Also, clouds seem to prefer to self-organize on all scales, from thunderstorms and squall-lines to tropical cyclones or hurricanes, which is not well understood. For example, there are about 90 tropical cyclones per year on this planet, plus or minus a few, a very robust number, year after year. And we have no idea why it should be 90 and not 60 or 120.

Q: Why did science become so important to you?

A: I have always been fascinated by nature as far back as I can remember. As a kid, I read lots of popular literature about science, especially physics. I was also good at math, and it is impossible to truly appreciate physics and its beauty without math.

Q: What have been your areas of interest at Stony Brook?

A: My current main interests are in global cloud-resolving modeling and in local urban modeling of coastal environments. The main thrust of the global modeling for me is to better understand how the self-organization of clouds in the tropics helps to regulate the tropical climate, and consequently the global climate, since the tropics occupy about half of the Earth’s surface. The local urban modeling is driven more by a practical application that could potentially advance our ability to predict extreme weather events and pollution transport in heterogeneous complex environments such as the New York and Connecticut Metropolitan area. Both of these themes require pushing supercomputers to their limits, which makes studying them particularly interesting for me as a computational scientist.

Q: What is the simplest description of cloud modeling you can provide?

A: A cloud-resolving model (CRM) is a model that solves the 3D equations of air motion and associated cloud processes such as production of precipitation using horizontal grid spacing finer than about 5 kilometers. Typical precipitating cloud systems are several times wider than that, which is why models of them are called cloud-resolving. The traditional global climate models, or GCMs, have grid spacing of about a hundred kilometers, which is too coarse to resolve typical clouds or even a thunderstorm. The CRMs are used to study not only hurricanes but also mid-latitude storms such as squall lines and summer-time thunderstorms. Those weather forecasting CRMs are usually run not globally but over some region such as the continental US. The global CRMs are still very expensive to be used for routine forecasting even on today’s fastest supercomputers. However, within next several years, the improving computer technology will make running them for global weather forecasts quite routine.

Q: Tell us a little about the new cloud-resolving model named SAM, or System for Atmospheric Modeling, and its applications.

A: Global SAM is the only global CRM that was entirely developed by the U.S. university system with some funding from NSF and by just a couple of scientists. Other eight global CRMs that participated in the DYAMOND project have been developed by national weather centers in countries like Germany, Japan, France and UK, and the U.S. large institutions such as NASA and the National Center for Atmospheric Research (NCAR). The DYAMOND project was not conducted to see which model produces a more accurate forecast. We are not there yet. It is a first systematic study to see how the leading global CRMs perform in terms of simulating basic cloud statistics, such as number of tropical storms and total precipitation among others, all simulating the same time period to compare to observations. It has to be noted that not only have SAM’s results been as good as the results of the other global CRMs, but SAM appears to be one of the faster models. SAM runs with a global resolution of about 4 kilometers. It features realistic topography and 16 different land types, such as different types of forests, savanna, desert, and the like. The simulation for DYAMOND was 40 days long, with the grid consisting of more than 3 billion grid cells, and took about 1,000,000 core-hours using 4,608 cores of the Cheyenne super computer at the NCAR. I also use SAM to better understand the self-organization of clouds in the tropics and how it would be affected by the future climate change.

Q: How accurate can cloud-modeling be today and how can we increase the forecast time and accuracy?

A: Weather cannot be predicted beyond 2 to 3 weeks, regardless of the accuracy of a forecasting model. It is because of the chaotic nature of weather known as “the butterfly effect.” Today, the models are quite accurate for 3 to 5 day forecasts, but can still fail from time to time. One of the ways to increase the accuracy of forecasts is to better resolve clouds and topography, which means increasing grid resolution. That is why the global CRM research is so important, as it can provide us the tool to test how grid resolution may improve accuracy of forecasts.