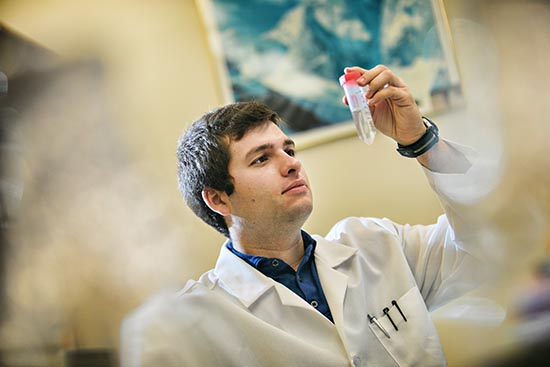 Joseph Sweeney ’17 loves a good challenge — so much so, that it was a key factor in his decision to attend Stony Brook.

“I knew that many of the science courses would be difficult and would push me to my greatest potential,” Joseph says.

For Joseph, meeting challenges is a way of life. His personal struggle with diet and weight shaped his career aspirations, leading him on the path to becoming a physician-scientist, specializing in diabetes and obesity. His own research guided him as he gained control over his diet, replacing unhealthful foods with better choices. He added strength training and other forms of exercise, which helped him shed 50 pounds.

“I want to work with patients suffering from these diseases, while researching the molecular basis of the disease or the pharmacological treatment options for them,” he said.

The pharmacology major and music minor also has a thirst for knowledge. “I knew Stony Brook would be a good fit for me because it would satisfy both my scientific and musical curiosity,” Joseph says.

Joseph, who was hooked on science since elementary school, found that research fueled his passion for molecular biology. “I work with proteins that are several nanometers wide, yet they are able to carry out essential functions within the cell. I find it amazing and beautiful how interactions on a molecular scale can have major impacts on the physiology of the body,” Joseph says.

“The goal of my research is to find a non-addictive drug that can be used to treat chronic pain as an alternative to opioids,” he says.

In his lab, under the guidance of Dr. Dale Deutsch, Joseph works with endocannabinoids, which are naturally created and released in the body to bind to cannabinoid receptors, which can mitigate pain.

To enhance his research opportunities, Joseph has welcomed the chance to participate in internships and presentations. This past summer, with funding from the URECA program, he conducted his own project, which involved screening nearly 70 new potential drugs that maintain the levels of endocannabinoids so that they result in sustained pain relief.

A trip to Northeastern University this past June to attend the Chemistry and Pharmacology of Drugs of Abuse Conference provided Joseph with an opportunity to network with graduate students and professors and deliver his research findings on fatty acid binding proteins.

In addition to his biochemistry research, Joseph assisted in clinical research through the Academic Associates Program within the Department of Emergency Medicine. Through this internship, Joseph gained valuable experience by screening and consenting emergency room patients. Interacting with a diverse group of patients also helped him strengthen his communication skills.

When Joseph needs a diversion from the serious nature of his studies, he turns to the arts.

A music lover since he picked up the saxophone in fourth grade, Joseph joined the Spirit of Stony Brook Marching Band without prior marching experience, when he was a freshman.

“I also joined Stony Brook Live, a club jazz band on campus, and was elected vice president,” Joseph says.  Stony Brook Live provides him with the chance to tackle a variety of genres such as jazz, pop, and ska, thus enriching his musical vocabulary and skills.

“We rehearse every week and perform live at gigs throughout campus,” he says. Joseph says he appreciates both the structure required to play in the marching band and the improvisational aspect of the jazz band.

A highlight of his musical activities was traveling to Iowa to cheer on the men’s basketball team in 2016 when the Seawolves earned their first trip to the NCAA Tournament during March Madness.

“I’ve had amazing opportunities at Stony Brook,” he says.