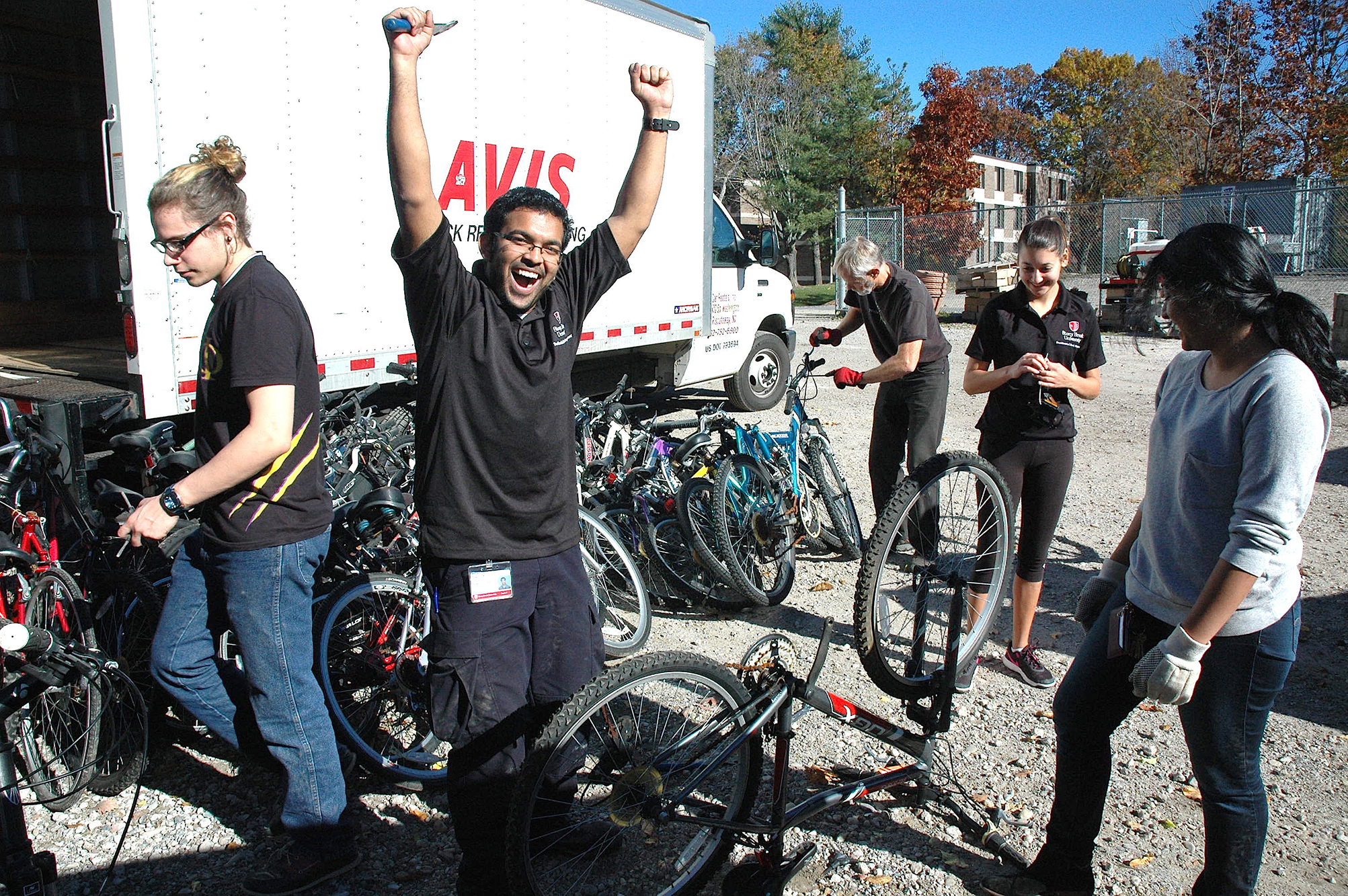 On November 11, fraternity members from Pi Lambda Phi and Student Health Advisory Committee (SHAC) students gathered at Sanger College behind Tabler Quad and loaded 47 unclaimed bicycles onto a truck rented by the charity organization Pedals for Progress, which repairs and transports bikes overseas to individuals who might have a use for them.

The initiative simultaneously gives a boost to people in developing countries and helps clear the campus of derelict bikes. Beginning in 2014, the University Police Department (UPD) and Residential Risk Management (RRM) began to notice an increase in the number of abandoned bicycles at Stony Brook, which gave birth to the Bike Registration Program.

This free service offered 10,400 student residents a way to better manage the number of bicycles on campus. The UPD and RRM tagged bicycles that were considered abandoned and removed them during major academic breaks.

A tag on an abandoned bicycle meant that it was subject to being confiscated and held if it was not removed to another location within a week. Illegally parked bikes, which are those not secured at a University bike rack, and especially those blocking pedestrian and vehicular traffic, were stored for a least a year, giving students adequate time to claim their abandoned vehicles.

Kathleen Valerio, Peer Education Program Coordinator and the advisor to SHAC and Pi Lambda Phi, asked both groups’ members to take part in the donation and recycling of those unclaimed bicycles.

“We chose this option because there will always be a constant flow of bicycles on campus since it’s a major form of student transportation. Many students leave their bicycles behind after graduation and they are effectively forgotten,” says Shalvi.

“My fraternity was looking to donate our resources to philanthropies that could help the local community and the world as a whole at the beginning of the semester,” says Michael. “Our 40 brothers got right on board and we began to develop fundraising ideas to donate our pledged amount of  $15 per bicycle.”

At the loading site, senior Marisa Femia soaked in a tutorial on how to prepare bikes for shipment that Gary Michel, Pedals For Progress collection coordinator, delivered to the students who had assembled. Soon she was talking her fellow students through the process, occasionally wielding a wrench or other tool. “I enjoy doing this because of my experience with the Alternative Spring Break Organization, which taught me the value of hard work,” she says.

“Each bike donated goes to a person in need,” says Valerio. “In Ghana, for example, peoples’ lives are transformed. Not only can they now get to jobs, the bikes help them get jobs.”

Pedals for Progress has received, processed and donated more than 148,000 bicycles, 3,400 used sewing machines, and $10.8 million in new spare parts to partner charities in 38 developing countries.

“To us a bicycle is a fun mode of transportation but in an impoverished country it changes lives,” says Michael.

Stony Brook University’s Center for Prevention and Outreach (CPO) has partnered with LiveOnNY to successfully encourage students, faculty and staff to register as organ donors.  Peer educators from CPO along with...