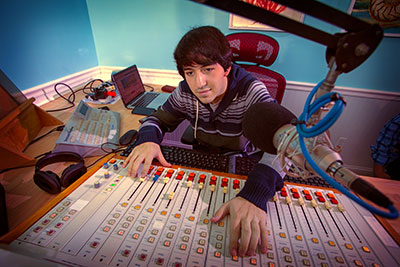 But Matthew has little reason for his fear: He has been around radio and media since before he can remember, as his father was the chief of engineering for Barnstable Broadcasting (later Connoisseur Long Island) in Farmingdale and currently is transmitter supervisor for Cumulus Media New York, from which Matthew acquired WELJ.

“I grew up with a passion for radio,” he said.

Matthew, along with his business partner, cut his entrepreneurial teeth in 2013 by developing a mobile application suite for the 10th anniversary of the Jones Beach Air Show. Afterwards, the pair founded and co-produced the annual Long Island Summer Festival in 2014. At the time, Matthew was only 15.

Matthew attributed his ability to accomplish these feats to the top-quality business education he received at Stony Brook, as well as to years of relationship-building and networking that have earned him the respect and trust of some of Long Island’s most talented business leaders.

Matthew still gets mistaken for just another radio staffer, he says. At a recent live broadcast in Flanders for the ceremonial lighting of The Big Duck, one of Long Island’s most famous landmarks, an attendant there told him, “You should tell your higher-ups that you did a fantastic job,” to which Matthew replied, “I am the higher-up.”

WELJ, while newly rebranded for the East End, has decades’ worth of broadcast experience behind it, “even if it is run by a couple of millennials,” Matthew says. WELJ’s program director is Keith Allen, who was one of the pioneers of 103.1 when B103 made its debut. Allen’s experience pays dividends: he is largely responsible for what Matthew describes as the “clean and Hampton-esque sound” of the new 104.7 WELJ.

Many in business choose a partner whose strengths are different from their own, and this is true of Matthew and Andrew. Matthew is a political science major with a double minor in business and entrepreneurship; Andrew is a business administration and marketing major.

The two began discussing business ventures when they attended high school together in Smithtown, New York. “We had very different ideas but both agreed that radio, especially with a local vision, is the hallmark of the broadcast experience,” Matthew says.

A strong work ethic cultivated in high school prepared Matthew for the difficult task of juggling the responsibilities of running a new business and finishing his college curriculum simultaneously. “I have free time in the day to make business meetings. I learned a long time ago that if you want something, you have to work for it. Nothing is ever given to you,” he says.

Matthew credits Stony Brook with having not only a diverse curriculum and culture that helped him deal with people of varying backgrounds, but also a business department filled with top-tier professionals who offer a lifetime of invaluable real-world experience, much of which he has found to be relatable to his own experiences.

WELJ, which was a country station syndicate out of Nashville when Matthew and Andrew purchased it, has a signal that spans Westhampton Beach to Block Island and inland Connecticut.

“The East End of Long Island is so different than the rest of Long Island,” Matthew says. “It should not be highly commercialized or just about marketing dollars.”

Armed with that vision, he plans to focus on East End community arts and events.

“We want to be the cultural center of the East End. In the weeks ahead we’ll be introducing morning shows and hope there will be a lot of heads spinning,” he says, adding that in addition to the radio station, he and Andrew developed a festival division under the name BOLD Entertainment, which is intended to culminate in a larger vision of serving a “broad spectrum of things designed to benefit Long Island.”

Acquiring WELJ will not be the end of the dial for Matthew.

“I doubt this will be the last radio station we will buy,” he says. “And we’ll be looking to expand far beyond radio into other forms of media.” In short, “this is just the beginning.”