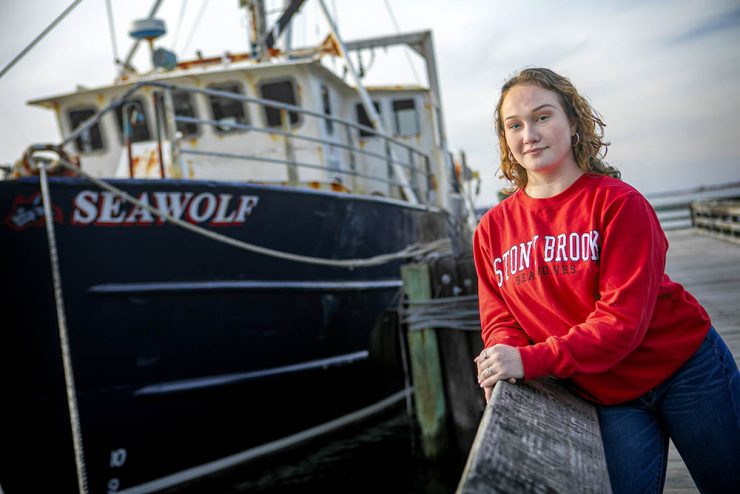 An acidic ocean that won’t support marine life. Plants and animals that can’t adapt to that acidification.

Armed with facts and research data, Stony Brook students are on the frontline to combat these threats to Earth’s land, sea and air and its inhabitants.

Alyson Hall ’20 and Amanda Thomas ‘21 are just two of the University’s marine “warriors” directing attention to the planet’s plight in an era when science is often pitted against hearsay, and profits can take precedence over public health and natural resources.

Hall, an environmental biology major with a minor in marine science, hailing from Owings, MD, is currently working on her honors thesis with Bradley Peterson, associate professor in the School of Marine and Atmospheric Sciences, and PhD candidate Alyson Lowell. They are conducting their research on the assessment of climate change conditions, copper treatment, and infection virulence on germination of the eelgrass species in the Shinnecock Bay and Peconic Bay on the South and North Fork of Long Island, respectively.

Hall explained that eelgrass can actually help mitigate the dramatic peaks and valleys in pH of coastal acidification, a likely byproduct of climate change and human impacts. These grasses may offer a pH refuge to those organisms less tolerant of dramatic swings in acidity. However, due to many factors including marine pathogens, eelgrass meadows globally have been dying off.

“Our research into the germination rates and infection virulence of these species when exposed to projected increased temperatures and acidic waters will hopefully directly inform restoration methods for eelgrass replanting,” Hall said. “If implemented soon enough, that may help buffer current and future projections of climate change conditions for seagrass meadow organisms.”

“The sooner we understand and are able to predict how eelgrasses will respond to the effects of climate change, the sooner we can implement these findings,” she said.

She added that this research does not prove climate change, but rather “is working under the future projections of climate change effects on water parameters.”

Thomas, a coastal environmental studies major with a minor in environmental engineering, is coming off a summer internship at Mote Laboratory on Summerland Key, Florida. Her ten-week-long internship focused on maintaining the Climate and Acidification Ocean Simulator (CASOS) and the chemical process of ocean acidification.

Ocean acidification is a direct result of burning fossil fuels, which wreaks havoc on marine ecosystems by releasing carbon dioxide into the environment. Thomas’ research focused on these harmful impacts.

“The ocean essentially acts as a giant carbon sink and absorbs a tremendous portion of the carbon dioxide, which then reacts with water molecules to form carbonic acid,” Thomas explained.

The result is the collapse of coral reefs, one of the most biologically diverse ecosystems on earth precipitated by a chain reaction. As Thomas explains it, the acidification process leads to calcium carbonate in seawater, a compound that is crucial to calcifying marine organisms such as crustaceans, sea urchins and corals. Weaker shells make it harder for the animals to fend off predators and leads to dramatic decreases in their survival rates.

Along with a decrease in pH, warmer ocean temperatures are also detrimental to coral reefs because corals enjoy a symbiotic relationship with a type of algae called zooxanthellae. In return for shelter, the algae provide nutrients to the coral reefs. Under stressful conditions, the corals will expel the zooxanthellae, which leads to bleaching, the loss of its food supply and eventual death.

Thomas also had the opportunity to learn about a destructive disease — Stony Coral Tissue Loss (SCTL) — spreading rapidly through the Caribbean and Florida coast and thought to be linked to warmer ocean temperatures and the decrease in available calcium carbonate. When a coral reef contracts the disease, lesions quickly spread throughout the coral’s soft tissue, leading to death.

One of the Mote Laboratory’s primary missions is to fight coral loss by rebuilding the reefs with laboratory-grown corals that are genetically resistant to the SCTL disease using a technique called micro-fragging, which involves using circular plugs of coral to heal and replace the damaged tissue.

“A dinner-plate sized coral can take 25 to 100 years to grow naturally. However, with the help of micro-fragmenting, it takes approximately five years for the coral to grow to the same size,” Thomas said.

“I was able to meet Dr. David Vaughan, the renowned scientist who created micro-fragmenting,” she said. “Working with a group of such hard-working, intelligent and devoted scientists and interns was amazing. It was extremely rewarding to surround myself with people who share my beliefs and passion for saving the environment.”