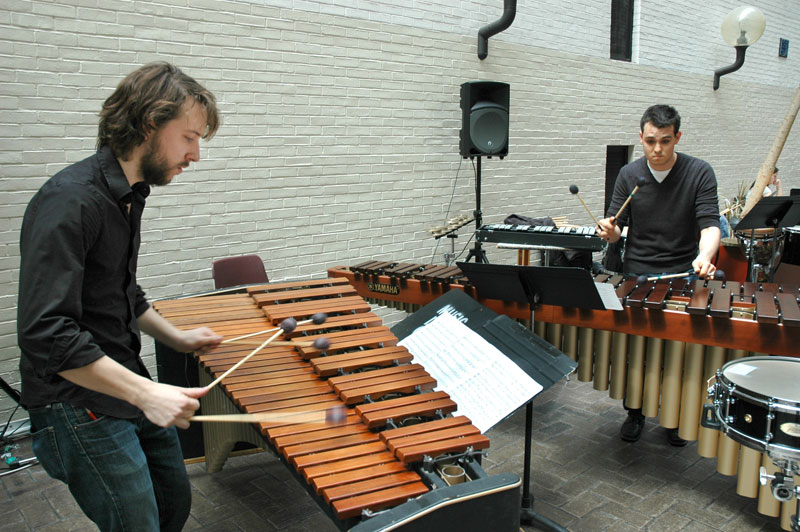 James Beauton’s idea to schedule “spontaneous” concerts (planned but not advertised) at various locations on Stony Brook University’s campus is the result of his desire to give percussion instruments a little more exposure.

“I wanted to bring a different kind of music to the general public, specifically to Stony Brook University students,” said Beauton, a second-year master’s student in percussion performance. “There are a lot of really cool things that percussionists do and play that I think people don’t realize; for example, performing with two and sometimes three mallets per hand. Holding these concerts in the middle of campus where you can’t miss them is the first step in widening awareness of them.”

Director of Concerts and Community Education Michael Hershkowitz, who books the concerts, suggested the Administration Building, the Frank E. Melville Jr. Memorial Library and the Charles B. Wang Center as venues with high concentration of students. Concerts are usually scheduled for Wednesdays between 1 pm and 2:30 pm, during Campus Life Time, when most undergraduates have free time in their schedules.

A series of five concerts for the spring semester is under way, and even though they are planned so as not to conflict with other scheduled events, they are not being advertised, so students will not know about them beforehand. Beauton began planning the concerts nine months ago.

The musical events often involve surprise guests. For example, on April 10, musicians from the University of Massachusetts, in Amherst, teamed up with their Stony Brook counterparts in a rock ‘n’ roll-influenced percussion concert.

“I wouldn’t say that I’m being featured as a part of the series, however, I am performing solo works in most of the concerts along with select members of the Stony Brook Percussion Studio,” he said.

“I am always trying to bring what I do to new audiences, and in this case, the undergraduate community at Stony Brook. The best way to spark interest is to literally bring the music to the audience, which is exactly what I’m doing with this concert series.”