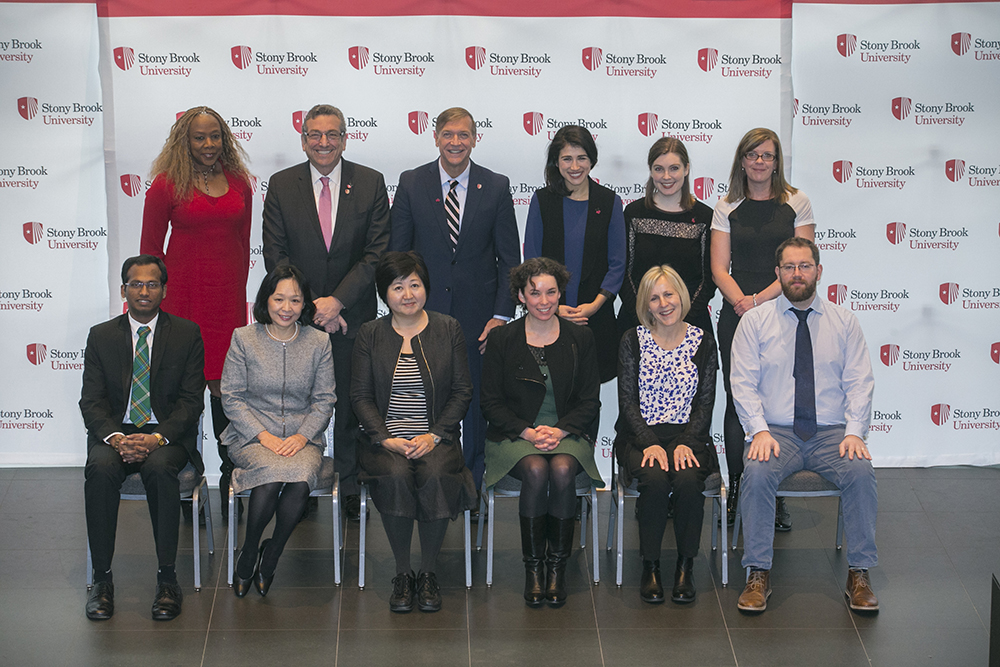 Stony Brook is one of 10 universities around the world — and only two in the United States — that have committed to the United Nations Women’s HeForShe movement to take bold game-changing action to achieve gender equality within and beyond their institutions.

During the two-day IMPACT meeting, held November 30 and December 1, representatives from seven of the other nine universities flew in from across the globe to discuss best practices and ways they can collaborate to take this solidarity movement to the next level. Representatives from UN Women were also in attendance.

President Samuel L. Stanley Jr., MD, welcomed the group on Monday morning and Charles Robbins, Vice Provost for Undergraduate Education, then shared what Stony Brook has been able to accomplish during the past few months and what we will be doing going forward. Joining Dr. Robbins in the presentations and discussions were Stony Brook graduate and undergraduate students; Rachelle Germana, Director, Undergraduate Colleges; and Professor Michael Kimmel, Executive Director, Center for the Study of Men and Masculinities.

As an IMPACT school, Stony Brook is committed to developing and implementing a gender sensitization curriculum for students, faculty and staff (including a mandatory orientation for all new students), along with programs that will address gender-based violence. We have agreed to meet frequently with the other IMPACT leaders to measure and report on progress, share best practices and engage other universities to champion this cause.

Following this historic IMPACT meeting, Stony Brook will host two major gender equality events in 2016. First, working closely with the Center for the Study of Men and Masculinities, we are planning a conference to take place on our campus with representatives from all 64 SUNY campuses. This conference will focus on gender equality as well as the Affirmative Consent. Second, we will host Executive Director of UN Women Phumzile Mlambo-Ngcuka as she discusses equality with President Stanley during a public talk. The HeForShe tour bus will make a stop on campus at that time as well. Details on these events will be announced early in the spring semester.

Throughout the academic year, Stony Brook will look for ways to champion gender equality on campus and beyond. A HeForShe steering committee — consisting of students, faculty and staff —is working on ways to engage campus groups and organizations in the movement. Learn more about HeForShe and how you can participate in this initiative by visiting stonybrook.edu/heforshe. Students interested in joining the HeForShe steering committee are encouraged to send an email to heforshe@stonybrook.edu.