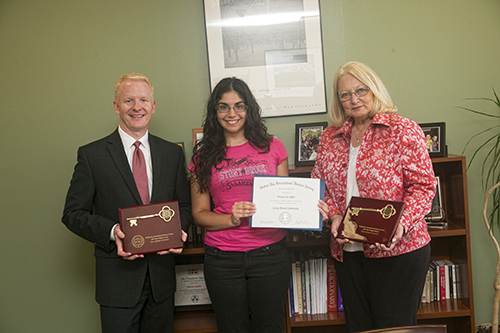 Imagine being fluent in five languages, learning a sixth and being eager to master more in the future. That’s just a few of the many reasons why TanyaLisa Agha — an undergraduate in an accelerated bachelor’s/master’s program and a double major in mathematics and Italian — recently received a $5,000 scholarship from the Golden Key International Honour Society, the world’s largest collegiate honor organization.

Golden Key has 2 million members and 400 chapters worldwide. Stony Brook University’s chapter, which was chartered in 1991 and has had more than 9,500 members, recognizes the top 15 percent of all juniors and seniors, based upon cumulative grade average.

A native English speaker, TanyaLisa is also fluent in Italian, Arabic, Spanish and American Sign Language, and is beginning to learn Turkish.

TanyaLisa doesn’t just talk the talk, however. To qualify for the Golden Key scholarship, a student must exemplify academic success, leadership and service — the three pillars of the organization.

“We are extremely proud of TanyaLisa and this special recognition that she has received from Golden Key,” said Richard Gatteau, associate provost for academic success. “She has worked very hard for the organization and demonstrates a strong commitment to those pillars, which form the core of Golden Key’s mission.”

Not only has TanyaLisa mastered her course material, but she is skilled at sharing that knowledge with her fellow students. Stony Brook’s Department of Mathematics valued her teaching abilities enough to hire her as an instructor to teach undergraduate courses. In addition, she has been a teaching assistant since 2010, beginning with a freshman seminar class. She is also a teaching assistant for Italian courses and set a precedent on campus by becoming the first teaching assistant for an Arabic class.

She is currently president of Stony Brook’s Golden Key chapter, and had served two years as the honor society’s vice president and a year as an honorary member liaison. She is also a member of the National Society of Collegiate Scholars, Gamma Kappa Alpha (national Italian honor society), the Italian club, and is an Undergraduate College Fellow, which TanyaLisa counts as one of her “many wonderful experiences at Stony Brook University.”

In that role she welcomes incoming freshmen and international students. “Whether I am answering their questions, working as a teaching assistant or giving a tour, I try to make the new students’ transitions to college life as enriching as possible. I am not just their mentor, but their friend,” she said.

“I’ve always wanted to be a teacher,” she said. “One of the games I was infatuated with as a child was school. I played the role of a teacher and had my own blackboard. My students were usually played by my mom, dad and cousins. That was when I realized that my pastime was also my desired career path.”

TanyaLisa’s record of service beyond the Stony Brook community is equally impressive. She became a Girl Scout at age 5, and at 15 began serving on the organization’s local planning board. What’s more, she plans and runs multiple community food and toy drives, and volunteers at local nursing homes, to name a few of her many community service activities.

“Ever since I was a young child, I have maintained a keen interest in volunteering for a variety of charitable organizations,” she said. TanyaLisa credits her parents with impressing upon her the importance of finding a career she can enjoy, whilereminding her to give back to the community.

“My family is my strength — my rock,” she said. “I am who I am today because of the love and support I have received and continue to receive from my mom and dad. They are truly the best.”

In fact, she often works side by side with her mother, ElbaLisa Agha, at fundraisers and service events, including a recent Chinese basket auction that benefited Students Against Destructive Decisions, a national organization that helps young people prevent accidents as a result of underage drinking, drug use, risky and impaired driving, and other potentially destructive actions.

“I try to be involved in any way I can, and always will be,” TanyaLisa said. “I believe in making this world a better place. As long as I am helping others, the smile on my face will never fade.”

It seems that TanyaLisa not only exemplifies Golden Key’s three pillars, she also is a pillar of the Stony Brook community. 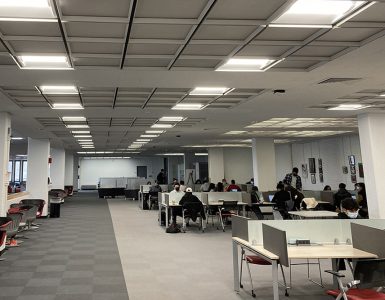