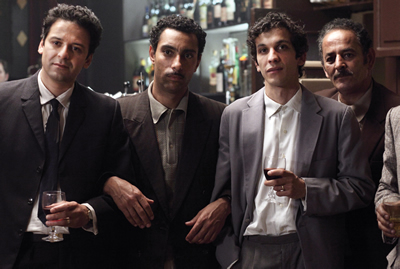 Sure, there’s Cannes and there’s Sundance, but for 20 years, discerning film lovers have been coming to the Stony Brook Film Festival to enjoy and discover movies hand-picked from hundreds of entries from around the world.

“It’s Sundance in your own backyard,” says Festival Director Alan Inkles. “If you can get to Sundance, great, but this is the closest that many people will ever come. And I’m telling you, in some cases, the quality of films is better.”

Inkles and his team have chosen an eclectic mix of 34 independent features, documentaries and shorts for the 20th anniversary festival, which runs from July 16-25. Stars of the films include Jonathan Pryce, Anthony LaPaglia, Hailee Steinfeld, Sam Worthington, S. Epatha Merkerson and many more.

“I think we’re doing something that no other university is doing around the country or anywhere in the summer, and only at night, so you can still enjoy your summer days,” Inkles said. “It really is a very special thing for this community, and I’ve heard it from them that they’re so grateful they can see the kind of films they can’t see anywhere else.”

Presented for the first time by Island Federal Credit Union, the highly competitive festival screens its films at one of the largest venues on the film festival circuit, the 1,000-plus seat Main Stage Theatre at the Staller Center for the Arts, which boasts a 40-foot screen.

The festival kicks off with the U.S. premiere of The Man from Oran, written and directed by Lyès Salem. Shown in French and Arabic with subtitles, this epic tale explores friendship, idealism, politics and betrayal, set in the years immediately after Algerian independence.

The premiere will be followed by the Opening Night Reception in the Paul W. Zuccaire Gallery on the Staller Center’s first floor, which will also house a Vintage Film Poster Exhibition that will run for the festival’s duration.

Closing Night features The Passion of Augustine, a French Canadian film directed by Léa Pool about a small convent school that has become a musical treasure. The film stars Céline Bonnier, who also starred in Mommy is at the Hairdresser’s, a feature at Stony Brook in 2012.

Other feature-length films enjoying their U.S. premieres include Painkillers (to be screened July 17, from the Netherlands), Number One Fan (July 20, France) and Projections of America (July 22, U.S.A.).

A Film Pass good for all 10 days of the festival is available for $85, and includes access to first-entry passholder lines, guaranteed seating up to 15 minutes prior to screening, and special offers from hospitality sponsors.

Inkles says the Film Pass is an offer film buffs just can’t refuse. “It’s $85. I’d pay that for just one movie at Sundance,” he said. “We make it accessible, and we make you want to come to all the films.”

A limited number of Gold Passes will be offered, allowing patrons access to the reserved section of the theatre as well as attendance at the Opening and Closing Night receptions, which otherwise have a $25 admission price, subject to availability.

Individual tickets are $10 for general admission, $8 for senior citizens and $5 for all students. You can purchase all passes, reception tickets and individual film tickets directly at the Staller Center box office (Monday-Saturday, 12 noon-6 pm and one hour before each screening), by phone (631) 632-ARTS or online at www.stonybrookfilmfestival.com.