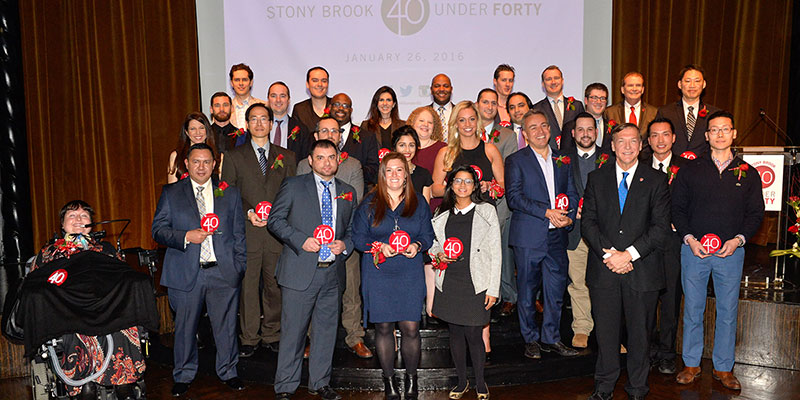 The “40 Under Forty” program honors forty of the most innovative and entrepreneurial spirited Stony Brook University alumni age forty or younger who are making significant contributions to their professions and communities.

Addressing the audience, President Stanley reminded the honorees and alumni in attendance that they are vitally important to the University’s mission and he urged them to become even more involved in their alma mater.

“My vision of a great university includes an alumni network so strong that students want to come to Stony Brook because they know their alumni network will be standing by to support them and their university,” he said.

Also participating in the event were Stony Brook Alumni Association President Robert Stafford ‘72, ’82 and student Danielle Meyers ’16 who opened the awards program with the story of her journey from the housing projects of Harlem to Foster Care Youth Ambassador to Stony Brook University EOP student, poised to become the first college graduate in her family.

“Being at Stony Brook has allowed me to break barriers that I never knew I could overcome,” she said to the audience. “ I’m proud and inspired that I will be able to call you my fellow alumni in a few short months.”

Each year the University solicits nominations of alumni age 40 and under who are making exceptional contributions in their respective professions or in their communities and who reflect the impact of a Stony Brook degree. For more information on the Stony Brook University “40 Under Forty,” visit stonybrook.edu/40underforty.

View the “40 Under Forty” flickr album for additional coverage of the event.