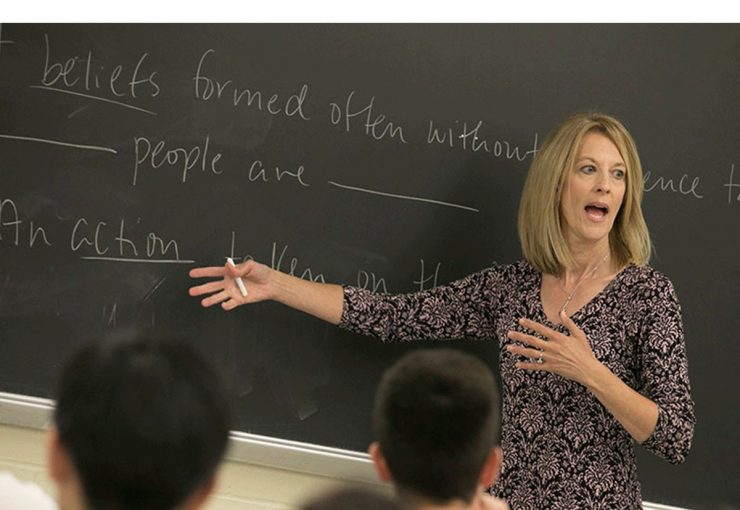 When she’s not juggling bookings with NPR, Barron’s, Fox News, MSNBC and Bloomberg TV, Stephanie Kelton might be found picking up and dropping off her two school-aged children and the family Samoyed — not to mention teaching classes in economics and public policy at Stony Brook University. Then there’s her book deadline.

Other days might include speaking engagements in Australia, Milan or the House of Lords in London. Also on her calendar: the Oct. 15 Presidential Lecture, “But How Will We Pay for It? Making Public Money Work for Us,” which happens to be the title of her upcoming book. In this lecture she’ll discuss why the conversation about good policy falls apart when politicians ask how government programs will be paid for.

Her husband of 14 years, Paul Kelton, a leading historian and professor and the first Gardiner Chair in American History at Stony Brook, said the family has become used to Stephanie’s schedule. After all, from 2015-2016 when they still lived in Lawrence, Kansas, Kelton had to be present in the Capitol where she was a chief economist on the U.S. Senate Budget Committee minority party, commuting home when she could. She then served as an economic advisor to Sen. Bernie Sanders’ presidential campaign.

The Keltons moved to Setauket in 2017 when they were recruited to teach at Stony Brook. Michael A. Bernstein, provost and senior vice president for Academic Affairs, said this was “one of those serendipitous moments when we could undertake a dual recruitment that worked dramatically for the institution as a whole.”

“We’re tremendously excited and pleased that Stephanie is a member of the Stony Brook faculty,” Bernstein added. “She represents everything that we embrace: excellence in scholarship teaching and service. We celebrate and admire her visibility and her engagement and impact on significant public policy debates that are now underway. Her interaction with political leadership, her engagement with government agencies, her experience in public debates that informs not only her own research, but her teaching, is enormously valuable to our students.”

At 48, Professor Kelton, who teaches in SBU’s College of Arts and Sciences, already has a body of published work spanning 20 years. Her economic approach, Modern Monetary Theory (MMT), a framework that she helped to found, is driving new economic ideas and influencing the direction of the Democratic Party.

“Stephanie is the rare combination of teacher, innovator and thought leader,” said President Samuel L. Stanley Jr., MD, who invited Kelton to speak at his Presidential Lecture Series. “Her ideas and approach to economics are changing the game at the highest levels and so it makes perfect sense to ask her to share some of her powerful perspective with our community in this forum.”

Beltway heavyweights say Kelton — who was named by Politico as as one of 50 “thinkers, doers and visionaries transforming American politics in 2016”— is a rising star not only in financial and economic circles, but political ones as well.

Congressman Ro Khanna (D-CA) said that if a Democrat is elected president in 2020, Kelton will likely be chosen as a senior advisor.

“She’s not just a brilliant thinker,” he said. “She’s going to be a force in the next 15 years in shaping economic policy.”

Senator Sanders described her as an outstanding and innovative thinker who was extremely helpful to him while they worked together.

“Stephanie is one of the leading economists in our country who is fighting to create an economy that works for all and not just the few,” he added. “We need more economists like her.”

Robert Reich, former U.S. Secretary of Labor, also weighed in. “There are few if any economists able to jump into the fray and come up with such original and compelling ideas as Stephanie Kelton — and able to communicate them with such clarity and aplomb. A national treasure.”

Kelton accepts these accolades with characteristic modesty. She didn’t imagine this career trajectory in her early 20s when she thought she’d just move up the ladder at a furniture store. She also toyed with life as a dentist — she was turned off by the requirement to study a cadaver — and as a lawyer, because she was then obsessed with the television show Cagney and Lacey. She credits John Henry, her undergraduate economics professor at California State University, Sacramento for encouraging her dual majors in business and economics and introducing her to the history of economic thought.

“That class really brought powerful ideas before me and I loved it,” she recalled. “Early on I liked money and trying to understand markets. I liked courses and topics that had to do with the Fed and policy making that had to do with spending money. And I liked reading the classics like Adam Smith and John Maynard Keynes.”

Henry, now a lifelong friend, said that early on it was clear Stephanie was an independent thinker and willing to undertake challenging projects.

“She was well-humored, personable and easy to talk with, but at the same time strong-minded. She had her position and was quite willing to defend it, though never in an antagonistic way.”

Kelton, a macroeconomist, said her early training was conventional and included Cambridge University for her masters. Before earning her PhD at the New School in New York City — which she selected for its diverse perspectives — she spent a year at the Levy Economics Institute of Bard College, a nonprofit, nonpartisan, public policy think tank. That’s when she first encountered the work of Warren Mosler, a Wall Street financier who was challenging the way economists think about money. He reached out to economists who follow Keynes, Kelton among them. She and several peers researched ideas she said had been lost in history and they pieced together Modern Monetary Theory, a burgeoning school of thought in economics.

Kelton said MMT is hard to define, but it’s “probably the greatest group project in the history of economics, a brand name that refers to the scholarship that was developed by around half a dozen people over 20-plus years.”

“It’s an enormous body of literature that has as its underpinning attention to the monetary system, the nature of money and why governments that operate with their own non-convertible fiat currencies can use their own budgets to maintain a full employment economy and low inflation,” she continued. “MMT is about pulling back the curtains so that we can see clearly what options are available instead of focusing on imagined barriers/obstructions that hamstring good policy.”

Among Kelton’s big ideas is the job guarantee, a public option that would be federally funded but locally administered — a concept she said is at least as old as the Second Bill of Rights proposed by President Franklin D. Roosevelt in 1944, and that was part of the Civil Rights Movement and the Democratic platform until the 1980s.

“It says if you want to work and you can’t find a job anywhere else in the economy, there’s a job for you,” she explained. “The Federal Government has to pay for it and it can be housed under the Department of Labor. They can set broad parameters that all jobs have to be oriented to criteria like a care economy: caring for people, communities and the planet.”

“I’ve always considered this the unfinished business of the Democratic Party,” she said. “But now you have Senators Cory Booker, Kamala Harris, Elizabeth Warren, Kirsten Gillibrand and Sanders all talking in terms of finding a way to guaranteed employment, which is pretty remarkable.”

Kelton believes she is having an impact on the current policy debates, but absent the financial crisis of 2008 she’s not sure that her ideas would have gotten as much attention and respect. The blog she started in 2009 in response to the crisis was an unconventional way to get her economic ideas out into the mainstream, and she got real-time responses. By 2013 she was being invited to make the rounds of more than 100 financial planning events, and she was gaining thousands of Twitter followers. In 2017, she had opinion pieces published in the Los Angeles Times and the New York Times.

She continues to gain respect both nationally and abroad. Currently she’s a subject of a documentary by London-based filmmaker Paul Thomas about the MMT theory, and Netflix wants to talk to her for a documentary based on her research about the macroeconomic effects of student debt cancellation.

“She’s still on an upward trajectory and will be for a long time,” said her colleague Robert Hockett, Edward Cornell professor of law and finance at Cornell University. “It’s not just academic economists who know who she is. People who work in the financial markets, political figures and people interested in public policy are all wild about her. All the journalists bring her on their shows so she’s becoming more well-known to the lay public as well as the specialists.”

Regardless of Kelton’s audience, her colleagues are in agreement that she’s excellent at communicating complicated concepts, and is entertaining and charismatic to boot. She once gave a lecture using the video game “Angry Birds” to explain deficits.

Bringing all this knowledge and experience into her college classes is an important goal for Kelton. As a professor for 19 years, previously at University of Missouri–Kansas City where she was chair of the economics department, she is mindful of the impact educators can make, so she hopes to inspire her Stony Brook students to become future economists — or at least get excited by the ideas.

“I love teaching courses that are policy-oriented around the economy,” Kelton said. “I like being able to bring a range of experiences that are diverse and have real-world applications that bring excitement into my classroom.”

“To actually hear her tell a personal story of how she had seen this policy in effect or these issues around the country and how she tried to work and fix them was special and unique,” Krivelevich said.

“She also puts an emphasis on students actually learning and understanding the materials and she’s always willing to answer questions even if they aren’t directly related to the topic. She gave a lesson she said was the same kind of lecture she gives to professionals, and I really appreciated that she treats college students with the same kind of respect.”

The result of that connection with her students is that there’s often a line outside Kelton’s office of those who want to speak with her, a line that’s so long at times that she put a foot-high hourglass on her desk as a visual time-keeper.

Kelton said she is humbled to have been asked to deliver the 2018 SBU Presidential Lecture.

“I am amazed by the support I’ve enjoyed from the Stony Brook administration, from the President’s office and the provost’s office,” she said. “That there’s been this much interest and support for the work that I’ve done and a willingness to take new ideas and put them out there shows that Stony Brook is a place where new ideas live and thrive.”