Simone Pero Is Redefining the Meaning of ‘Impact’ 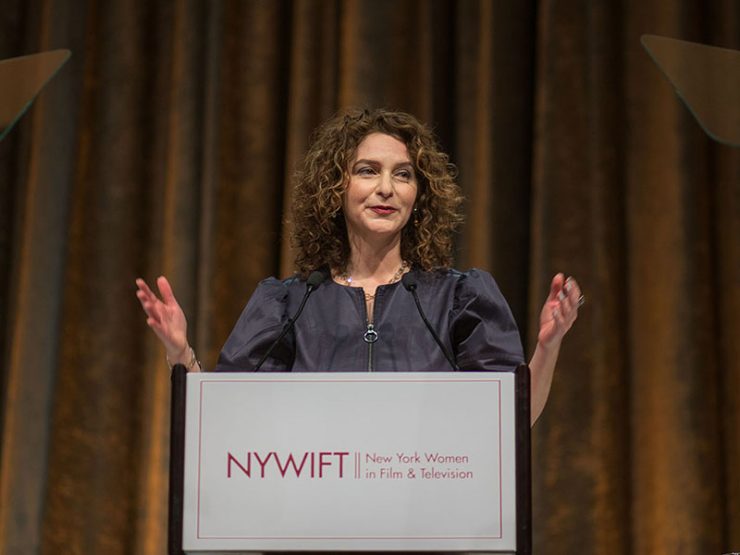 Simone Pero could not possibly have chosen a more appropriate name for her strategic marketing and production firm specializing in the confluence of content and social action: For Impact Productions.

Continuing to serve as visiting faculty, Pero, a Stony Brook alumna, was part of the original leadership team—along with Artistic Director Christine Vachon of Killer Films, Program Director Magdalene Brandeis, and Associate Provost Robert Reeves—responsible for creating what has evolved to become the Stony Brook MFA in Film with tracks in Directing, Screenwriting, TV Writing, and Producing, along with an Independent track.

A scan of the news page on the For Impact Productions website reveals the far-reaching impact Pero and her firm have had since the company’s founding nearly eight years ago. Over the past two years, though, the company and Pero have moved beyond having significant impact to essentially knocking the world off its axis by taking aim at such issues as: child sexual abuse across the globe, with international outreach linked to the HBO feature film “The Tale”; and gender parity in the entertainment industry, through activism via the documentary film “This Changes Everything.”

“Gender-based sexism and sexual harassment have been pervasive and occurring for decades in our industry,” Pero said at that time. “Not only from those at the top but it is also happening in all positions in front of and behind the camera. Today, we are calling for a fuller conversation around the issue and concrete action to improve the reporting structure and enforcement of policies. We commend the NYC Commission on Human Rights for convening a diverse array of voices to help create policy and strategy to ensure that all women work in healthy, equitable and safe environments.”

On May 9, 2018, Mayor Bill de Blasio signed the Stop Sexual Harassment in NYC Act, a comprehensive legislative package aimed at addressing and preventing sexual harassment in the workplace. The package includes an expansion of the City Human Rights Law in cases of gender-based harassment to increase the statute of limitations from one year to three years and expand protections to all employees, regardless of the size of their employer.

Also in 2017, Pero became an executive producer of Tom Donahue’s documentary “This Changes Everything,” which premiered at the Toronto International Film Festival in September 2018.   Nominated for awards at four separate festivals, the film is described on IMDb as “an investigative look and analysis of gender disparity in Hollywood, featuring accounts from well-known actors, executives and artists in the industry.”

On January 17, 2019, Deadline Hollywood announced that theatrical, streaming and broadcast rights for North America for “This Changes Everything” had been acquired by Good Deed Entertainment and the film would be released theatrically in the first half of 2019.

Switching focus to global impact, few if any films can match the kind of far-reaching raising of awareness and call to action achieved by “The Tale,” another film on which Pero served as a producer, and much more. In this film, her first scripted feature, longtime award-winning documentary director Jennifer Fox presents an autobiographical recounting of child sexual abuse while exploring the way trauma can shape an individual’s memory into a self-protective shroud over the experience.

Premiering in the U.S. Dramatic Competition of the 2018 Sundance Film Festival, where it was nominated for the Grand Jury Prize, “The Tale” was picked up for distribution by HBO. Echoing unanimous critical praise for the film, David Ehrlich wrote in his IndieWire Critic’s Pick review that “The Tale” is “an immense, brave, and genuinely earth-shaking self-portrait that explores sexual assault with a degree of nuance and humility often missing from the current discourse. ‘The Tale’ is undeniably primed for the #MeToo movement, but it’s also so much bigger than that.”

Simone Pero’s involvement with “The Tale” dates back to some six years before the film’s release.  She had worked with Jennifer Fox on the director’s six-part series, “Flying: Confessions of a Free Woman” back in 2008. A few years after that, Pero wrote in an email, “Jennifer approached me with a fiction film script she was writing and said, ‘I think there’s the potential to change the world, will you help me make that happen?’”

“After reading Jenn’s script, the complexity and brilliance and uniqueness of it, it didn’t take me long to decide to get involved. Jen also had a critical understanding of the power of visual storytelling to help people and to change and deepen conversations around important social issues … and she wanted to use ‘The Tale’ to start a new and richer global understanding in our culture around narratives of abuse and trauma. For my work as a film producer focused on social impact, this was music to my ears.”

“So, I came on board in the script writing stage,” she continued, “way before one frame of ‘The Tale’ was shot, to develop a plan on how the film could be used beyond the screen. For example in local communities and in fields of practice for professionals who focus on issues of sexual abuse, trauma and healing, and advocates who are leading the charge to end the worldwide epidemic of child sexual abuse.”

Acceptance into the 2018 Sundance Festival “forever changed the trajectory and possibilities for this film and our social impact mission,” Pero wrote. Four months after HBO,  in an unprecedented move, picked up the distribution rights, the film was on the air worldwide and has now been shown in 200 countries. The film has been screened, and won honors, at myriad festivals globally, and been nominated for prestigious awards, including from the Golden Globes, Emmys, Film Independent Spirits, Critics Choice, and Gothams, among others.

HBO has supported all outreach efforts to allow free screenings with organizations, professional conferences, schools and universities, using the film to expand and deepen the conversations around understanding, preventing, and ending child sexual abuse.

In the weeks and months since the film’s first screenings, Pero and Fox’s outreach work has made profound inroads in progress on the ground and at the top level in the field of child sexual abuse. For example, the first week of October last year began with the film and filmmakers as featured participants in the launch of The Economist’s Intelligence Unit’s Benchmarking Index on Child Sexual Abuse and Exploitation at the United Nations, hosted by the World Childhood Foundation and HM Queen Silvia of Sweden.

At the UN on October 3, 2018, Fox not only presented “The Tale” and her story as a survivor and filmmaker but also laid out the case for how fiction film can be a tool to change the world. She implored global policymakers and advocates to move beyond the intellectual, statistical, and nuts and bolts of resolutions and law-making and consider emotional trauma in order to gain understanding and perspective as they approach their work around the world.

In addition to the Queen and Princess of Sweden, those in attendance included the Deputy Secretary General of the United Nations Amina Mohammed; the Swedish Ambassador to the UN, H.E. Olof Skoog; and a host of high level global experts focused on ending child sexual abuse and exploitation.

Later the same evening, Fox delivered a courageous and powerful speech to close the World Childhood Foundation’s gala, pointing out that “child sexual abuse is everywhere … beyond class and culture and race, it happens to everyone across the globe and it’s time to say ‘no more’!”

Two days later, Fox and Pero joined an esteemed braintrust meeting to explore ways “to shift our culture around CSA, particularly during this pivotal moment in global history.” The gathering, inspired by “The Tale”—its articulation of CSA, and its reach into mainstream culture—was co-designed by Pero, who brought to the table a range of issue experts, social movement builders, and advertising and marketing executives for the kind of rare multi-disciplinary approach that is vitally important in the effort to unearth new ideas and solutions.

As Pero said after the session, “It was clear that not only is ending CSA a societal issue, it is a moral, economic, and humanitarian imperative.” Today, five months later, as a result of that first meeting, a working coalition has been formed with organizations like the Child Safety Pledge and Darkness to Light to move the needle forward toward education and prevention.

Then, on Sunday, October 7, the Museum of the Moving Image held what Pero called “one of the most extraordinary screening events of ‘The Tale’ to date.” In a discussion lasting more than an hour after the screening led by Len Amato, president of HBO Films, Fox and ‘me too’ movement founder Tarana Burke “broke down the issues surrounding CSA like never before.”

Today, “The Tale” outreach team continues to explore opportunities to best use the unprecedented accomplishment for “an indie film with big goals” to continue supporting work around prevention, deeper understanding, advocating, and healing around the world. More than a year since the film’s Sundance premiere and coming up on the one-year anniversary of HBO’s broadcast premiere, there continues to be a surge of interest from universities and organizations to bring the film into their own arenas and the hope is to widen the reach to corporations, ethnically diverse communities, the legal arena, and to parents, teachers and administrators. “For example,” Pero said, “one of our dreams is for every PTA around the country to see and discuss the film.”

Since the start of 2019, Pero has been tapped to advise on high-profile, social issue-oriented film and television content projects. She is also continuing to appear on behalf of “The Tale,” most recently at the Atlanta Jewish Film Festival. She will also be doing the Q&A for the opening night screening of “This Changes Everything” at the Women’s Film Festival in Philadelphia and for the film’s screening on NYWIFT’s Support Women Artists Now (SWAN) Day on March 30, 2019 at the SVA Theatre in Manhattan.

It is a demanding schedule, but the dedicated and seemingly tireless Pero shows no signs of flagging. “While I am tremendously pleased and have much gratitude for what we have been able to accomplish so far,” Pero said, “we have only begun to explore the power of film and artistic expression to raise awareness and get us all thinking in new ways on critical social issues. My hope is to continue to build on the momentum and continue to make breakthroughs.”