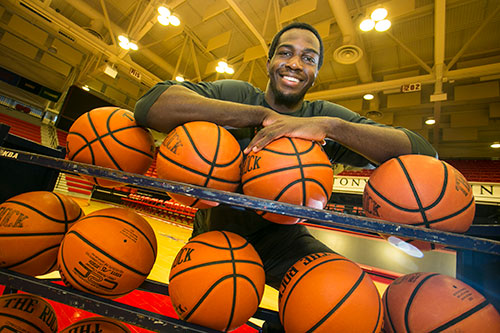 Jameel Warney ’16 just spent 10 days in a Dallas Mavericks uniform, but he has not forgotten his ties to Stony Brook University, nor his commitment to helping young athletes learn the game that he loves.

Last winter, he helped the Seawolves advance to the NCAA Tournament with a career-high 43 points in a victory over Vermont. He also averaged 30.3 points per game and tallied 15.3 rebound during the three playoff games.

While playing in six games in the summer league, Jameel led Dallas in field goal percentage (.593), offensive rebounds (4.5) and blocks (1.0) per game.

This past week, Jameel returned to campus to teach aspiring young players the basketball fundamentals at the Jeff Boals Summer Camp in the Island Federal Credit Union Arena. Boals, the new head coach at Stony Brook, brings a pedigree as an assistant coach at Ohio State University, where he helped guide the Buckeyes to the post season in each of his seven seasons there.

“It’s as if I’ve never left,” said Jameel. “Stony Brook is my home away from home.” Jameel lives in Plainfield, New Jersey.

“Stony Brook took a chance on me and this school holds a special place in my heart. It’s great to come back here and hang out with the young kids,” he added. “This is my fifth year at the camp and I’ve enjoyed watching them grow and get better. They were barely hitting the rim a few years ago.”

Jameel said he emphasizes the fundamentals of defense when he teaches younger players. “They have a lot of energy and it doesn’t require the same skill level as offense does. A lot of players can score but when you take that away from them on the court, what else can they do?” he said.

Jameel said that Boals is a great fit at Stony Brook. “He brings some of that high major IQ to the team from being in the power conferences, and it is going to be great to see the new era begin here,” adding “Stony Brook now has baseball and football players playing professionally. It would be great to get Stony Brook more exposure and I see it as my duty to make it to the NBA.”

Regardless of whether the 6’8” forward can find a permanent place on an NBA roster, Jameel appears destined to enjoy a professional career in basketball.

He was recently invited to the Mavericks training camp, which begins in September. But according to Adam Gutes, associate director of athletic communications and Stony Brook’s men’s basketball contact, Jameel will make a career of basketball whether it is in the United States or overseas. 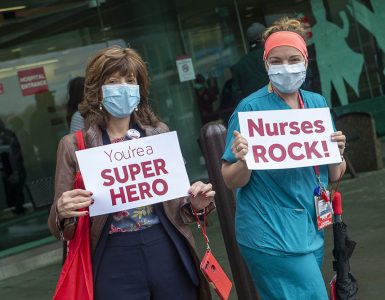 More than 40 caregivers from SUNY Upstate Medical University have arrived at Stony Brook Medicine to help treat patients associated with the coronavirus pandemic. A total of 21 nurses started work on Friday, April 10...

The virtual panel discussed ways that college students could support their campus and greater college town communities in managing the pandemic this semester.