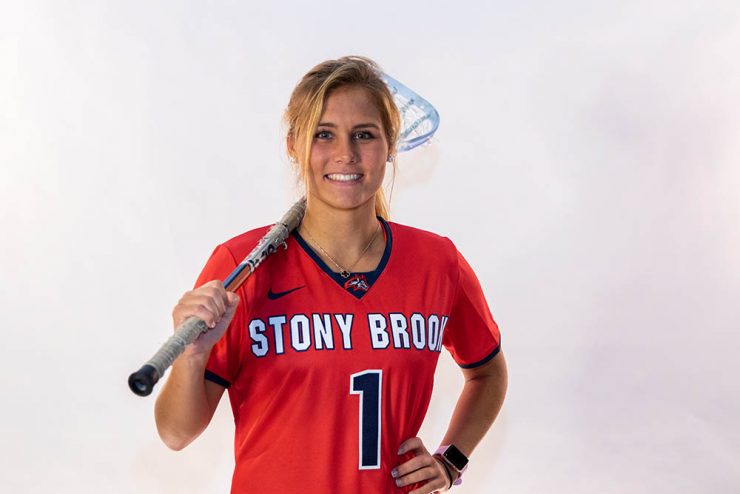 From the first time Kira Accettella ’23 held a lacrosse stick at the age of 5, she knew that athletics was her calling. Only one year earlier, she had been living in a Russian orphanage, placed there by her birth parents, she was told, so she could have a better life.

Accettella’s life in the orphanage was tough but transformative. Since she was so young at the time, she remembers little about her experience there except that she had “nothing — no family, just myself, and I think that’s why I’m so independent and so strong.”

Not long after arriving in the United States, Accettella was diagnosed with Attention Deficit Hyperactivity Disorder and auditory processing issues, which presented a challenge for her American adoptive parents. Fortunately, they quickly recognized her athletic prowess and signed her up for lacrosse, soccer, basketball, track, gymnastics and volleyball — activities that were perfect for the energetic youngster.

Being athletically gifted, Accettella continued to excel as she encountered a higher level of competition.

She holds the record for fastest mile at Oakdale-Bohemia Middle School and also won first place for sharpshooter in basketball there.

“Anything athletic I picked up fast and was a natural at it,” she said. “My mom says it took her about five minutes to teach me to ride a bike.”

Sports became a priority in the Accettella household, so much so that her parents enrolled her in private school — St. Anthony’s High School in Huntington, New York — because it had an outstanding sports program.

But before she went to St. Anthony’s, she was on the varsity lacrosse team at her home district at Connetquot High School in 7th and 8th grade. St. Anthony’s typically did not allow freshmen to play on a varsity team, so transferring there and knowing she could not play immediately was a tough decision.

“After Saint Anthony’s camp and three weeks of tryouts, I was summoned to play varsity, and I was thrilled that I had made the decision to transfer,” she said. “Going from public school to a private school was a bit of an adjustment but nothing I couldn’t handle.”

Moving up quickly through the ranks is a constant theme in Accettella’s athletic life.

“I think the highlight of my experiences at Stony Brook would be when I began starting women’s lacrosse games as a freshman. That meant the world to me, and I had worked hard for it,” she said.

She described how she made that life-changing connection: “Sports gave me the confidence I lacked from my schoolwork. Lacrosse became my favorite, my passion.”

“I made my decision that day to attend Stony Brook. I knew it was a perfect fit,” she said. “My high school assistant coach, Claire Peterson, who also went to Stony Brook, recommended I enroll in lacrosse camp at Stony Brook. I pay attention to statistics and knew I wanted to be on a winning team. That we are a top-ranked team is very important to me and something I’m very proud to be a part of.”

Although athletics came naturally for her, Accettella struggled with her studies — that is, until she arrived at Stony Brook.

“I enjoyed taking pre-calculus this past semester since I’ve always found math interesting. I loved science as well and enjoyed my writing class because I love journal writing and expressing myself,” she said. “Balancing lacrosse and academics has always been a challenge for me. I had put so much effort into lacrosse and not as much into school. I can say college definitely changed that for me. ”

Accettella credited time-management techniques and support from the Goldstein Family Student-Athlete Development Center, along with constant mentoring from Academic Advisor Briana D’Amico, for her progress and success.

In the end, it is Accettella’s grit, determination and desire to succeed that are her core guiding principles.

She looked back at a turning point in her young but so far stellar career.

It was when she was the anchor on the track relay travel team The Golden Girls at Oakdale-Bohemia Middle School that Accettella’s leadership skills emerged.

“Kirstin, who was my teammate then and my best friend now, beat me in a race and I was so upset. I asked myself, ‘Who is this girl beating me?’” she said. “I was so competitive and eventually I bested her. We became friends and hung out a lot. Her dad said, ‘You should play lacrosse.’ He saw how athletic I was.”

He showed the girls a YouTube video on lacrosse.

“That was it, I was hooked. I got all my lacrosse equipment and practiced and practiced,” Accettella  said. “Pete, Kirstin’s dad, was my first coach and he had such a huge impact on getting me into lacrosse. He gave me so much confidence.”

When her lacrosse-playing days come to a close, this health sciences major envisions becoming a nurse or a physical therapist. “Helping people is something that inspires me and makes me feel good inside. It will be important to me to do something that I love and enjoy.”

She also wants to return to her birthplace in Russia and come to terms with her past.

“I want to know more about my life over there, and I have so many questions. It’s not easy growing up not knowing anything about your family or where you came from, but I hope to go back and figure it out.”