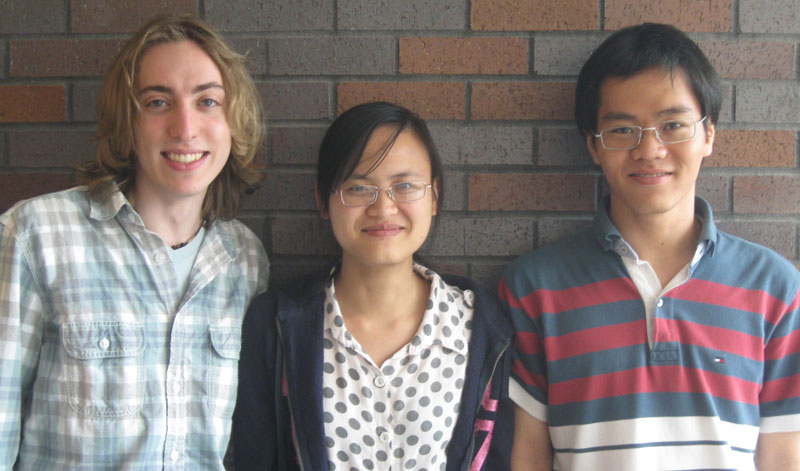 Stony Brook University’s team, made up of undergraduate students Thao T. Do, Dat Pham Nguyen and Kevin R. Sackel, placed fourth in the 73rd annual William Lowell Putnam Mathematical Competition administered by the Mathematical Association of America on December 1, 2012. The competition is considered by many to be the most prestigious university-level mathematics contest in the world.

The Stony Brook team as a whole won $10,000, and each student won $400. All three team members also placed in the Honorable Mention category as individual contestants. The first-place team was from Harvard, second place went to MIT, third place went to the University of California, Los Angeles, and fifth went to Carnegie-Mellon University. A total of 4,277 students from 578 colleges and universities in the United States and Canada participated in the competition; there were teams from 402 institutions.

“Stony Brook has been competing in the Putnam for years, but this is the first time we have placed near the top,” said Leon Takhtajan, Chair of the Department of Mathematics. “We are extremely proud of Dat, Kevin and Thao.”

Thao Do attended high school in Vietnam. In her final year of high school, Thao received a silver medal in the International Math Olympiad, along with her teammate Dat Nguyen, and was then awarded a scholarship from the Vietnamese government to study abroad. “I chose Stony Brook because it has a strong math department, and the tuition fee is affordable,” said Thao. She is now a junior and plans to apply to graduate schools next year.

Dat Nguyen also grew up in Vietnam, where he attended the High School for the Gifted at Hanoi University of Education. He chose Stony Brook’s Department of Mathematics based on the recommendations of his teachers and friends. Dat is a sophomore and plans to pursue a PhD and become a mathematician.

Kevin Sackel, from Plainview, New York, is an Honors College student majoring in math and physics. He received a 2013 Churchill Scholarship to support his postgraduate study at the University of Cambridge, where he will pursue a master’s degree in mathematics. Kevin is president of the Math Club and does research in mathematics and theoretical physics.

The lists of the top 10 teams and the top 100 individual contestants will be published in the American Mathematical Monthly, together with the problems and solutions.

The Putnam Competition began in 1938 and is designed to stimulate a healthy rivalry in undergraduate mathematical studies in the colleges and universities of the United States and Canada. William Lowell Putnam, a member of the Harvard class of 1882, valued organized team competition in regular college studies. In 1927 his widow, Elizabeth Lowell Putnam, created a trust fund known as the William Lowell Putnam Intercollegiate Memorial Fund. It was not until after Mrs. Putnam’s death in 1935 that the examination assumed its present form and was placed under the administration of the Mathematical Association of America.