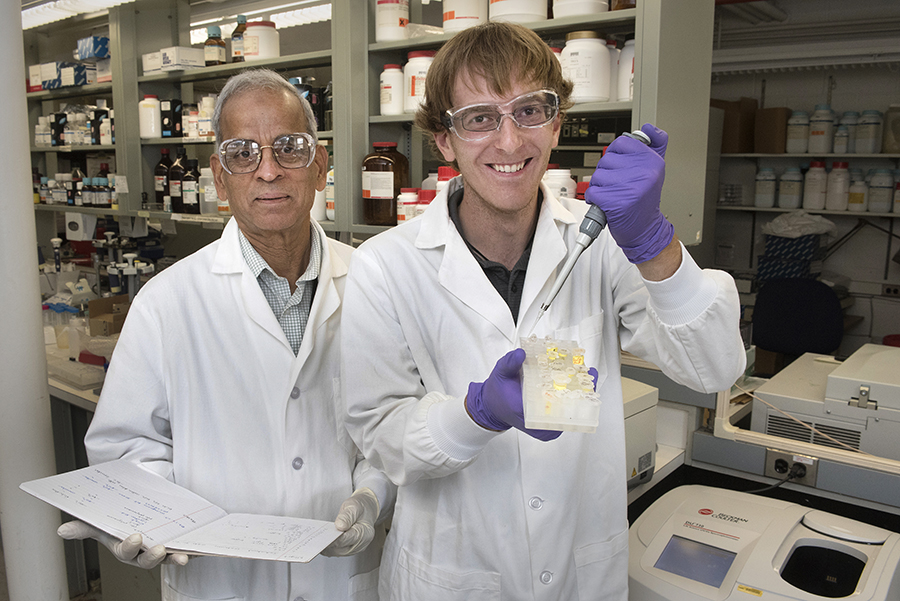 Stony Brook University’s relationship with the U.S. Department of Energy’s Brookhaven National Laboratory, one of the nation’s premier research facilities for nuclear and high-energy physics, is a key strength. The partnership affords high-achieving undergraduates an opportunity to do hands-on Big Science, and physics major Casey Vieni ’15 has taken full advantage.

“My favorite aspect of Stony Brook has been its access to resources,” said Casey. “Very few other universities can claim such access to huge government facilities that students can use. I never thought I would get to use the National Synchrotron Light Source for my research.”

His research focuses on developing drugs against deadly neurotoxins such as botulinum toxin. As part of a Department of Energy Science Undergraduate Laboratory internship run by Brookhaven’s Office of Educational Programs, Casey collected diffraction data from the portion of the neurotoxin that would convey its toxicity if it were part of an intact molecule. He grew crystals of this fragment (non-toxic by itself) from a protein source, and then brought these crystals to the Synchrotron to study them with x-rays. The data helped him determine the structure and function of this particular protein.

“I’m very grateful for the opportunity to mentor such a fine student,” said Dr. Swaminathan.

Research on the toxin and preventative measures against the toxin are for biodefense purposes, in case the toxin is ever used as a weapon. Other members of his lab group work on studying plant proteins as part of BNL’s mission to study alternative energy sources in a sustainable environment.

Casey’s scientific bent is in his bloodline — both parents graduated from college with engineering degrees. “Their encouragement led me toward a fascination for experimentation with everyday objects,” said Casey.

“I was constantly taking apart my childhood toys or different electronic equipment my dad discarded just to see how it worked.”

That fascination remained with Casey through high school and led to his netting Intel semi-finalist honors in 2012, as well as the Sigma Xi Award at his Undergraduate Research and Creative Activities (URECA) poster presentation in 2015.

Marvin O’Neal, director of Introductory Biology Laboratories at Stony Brook, proved to be the most “transformative” teacher Casey had while at Stony Brook.

“He taught me how grants are awarded at state institutions and which governmental aspects tend to favor research, in short, how to communicate the value of scientific research,” said Casey

Casey said that he originally joined his research group because he was interested in biology and medicine. He later realized lab-based research would provide useful training for a career as a physician scientist.

“I love the analytical skills that a physicist must develop. I thoroughly enjoy critical thinking and working step by step to solve a problem,” he said. “I love the applicability of physics — that it is everywhere and underlies everything. Much of the biological work I do is rooted in physics and a physics degree can lead you to any career path.”