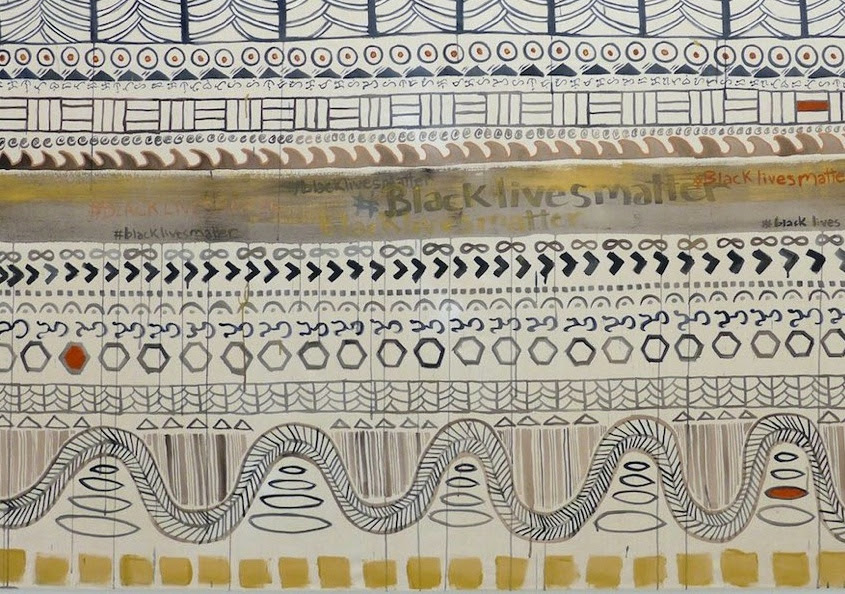 An artist reception will be held on Saturday, November 7, from 7 pm to 9 pm, and an artist talk is scheduled for Wednesday, November 18, at 4:15 pm. All events are free and open to the public.

Manalo is an interdisciplinary visual artist whose work addresses ideas of power and identity as defined by race, ethnicity, geography and class. Combining painting with photography, drawing, sewing and writing, her work embraces visual clues and coding, often inspired by her Filipino-American heritage.

Her recent body of work incorporates imagery inspired by indigenous Filipino tattoos and pre-colonial Filipino script, as well as contemporary phrases and symbols. The Zuccaire Gallery exhibition includes a new, large textile piece that she created specifically for the space.

Manalo has shown her work internationally since 1999, including a solo exhibition at the Orlando Museum of Art, and group and solo exhibitions in New York, Washington, DC, Baltimore, Chicago, Los Angeles, San Francisco, Seattle, Philadelphia and Berlin. Her work is in numerous public and private collections including the National Academy of Sciences in Washington, DC, and the permanent collections of the US Embassies in Bulgaria, Kazakhstan and Nepal. She was featured in New American Paintings in 2004 and 2006 and was awarded a fellowship at the Virginia Center for the Creative Arts in 2008, 2009 and 2011 with support from the Morris and Gwendolyn Cafritz Foundation for 2009.

Her work is represented in Washington, DC, by Addison Ripley Fine Art where she has had two solo shows in 2009 and 2012 and another upcoming in 2016. Additionally, Manalo’s work is included in the Drawing Center and White Columns curated artist registries. She received her MFA in Painting from Yale University, a BFA from the School of the Art Institute of Chicago and a BA from the University of Wisconsin, Madison.

Gallery hours are Tuesday through Friday from 12 pm to 4 pm and Saturday from 7 pm to 9 pm. It is also open during intermission and one hour prior to most Staller Center season performances. The Gallery and all events are free and open to the public. For more information please visit the website, call (631) 632-7240 or email ZuccaireGallery@stonybrook.edu.

When she was five years old, Ximena Lopez-Carrillo dreamed of becoming an Olympic athlete, especially after her mother enrolled her and one of her sisters in diving lessons. What the athletically gifted youngster, who...

This Saturday you are invited to join Professor Nobuho Nagasawa and SBU students in lower Manhattan to paint storefronts as part of a group of artists welcoming change.

Creativity Is the Focus of Black History Month 2021