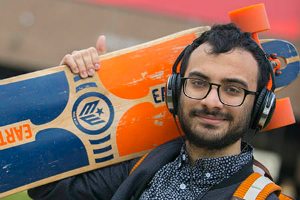 Omar Naimi ’17 thinks of himself as “absurdly ambitious.” As a child, he wanted to become President of the United States. But as he grew older and learned about the complications inherent in politics, he traded that dream for a new one: becoming an architect.

Then in high school he became obsessed with the microscopic complexities of cells and their components, atoms. He realized that big dreams could involve the smallest building blocks and processes known to mankind.

“I went from wanting my name on a skyscraper to wanting to have a protein named after me,” said Queens native Omar, a biochemistry and mathematics major

At Stony Brook, BIO 361 solidified Omar’s passion for biochemistry and his research lab experience reinforced his love for the molecular scale sciences.

In his junior year, Omar began working in a chemical biology lab with Professor Peter Tonge, an association that lasted until he graduated. Perhaps his most important research involved running chemical reactions to make a new molecule from simpler molecules, a process known as organic synthesis. Omar and his team worked on the synthesis of bivalent inhibitors, or drugs with two attachment parts that adhere to a specific protein to prevent its crucial function. Most antibiotics attach to one site but bacteria have proven to overcome that issue and become resistant.

“If the lab successfully develops a new class of antibiotics that attach to two sites, we can more effectively treat bacterial diseases such as tuberculosis and staphylococcus, which have become increasingly difficult for doctors to treat,” he says.

So if Omar someday discovers that inhibitor he will see his dream come true but he wisely diversified his curriculum and increased his employment value while at Stony Brook by taking creative writing and teaching a number of courses.

Omar learned the value of interdisciplinary studies and collaboration when he co-taught a class about originality and creativity with Professor Sasha Kopp, Dean of the College of Arts and Sciences, used his mathematics background to co-teach a course called “What is a Number?” with Professor Scott Sutherland, and parlayed his love of soccer into teaching the GLS 102 class with Professor David Maynard for three years.

“Writing is a major part of being in any field, especially when publishing papers in research,” said Omar. “The thought process needed to write a poem is different than a screenplay or short story and all three are massively different than writing a mathematical proof, lab report or research presentation.”

Omar said that his most valuable collegiate experiences were being an AIDS peer educator and serving as head teaching assistant for the molecular science sequence.

The University Scholar became an AIDS peer educator in his junior year and in that capacity relied upon his leadership abilities to increase community awareness of the disease and how it impacts different cultures and identities disproportionately.

“Being the head TA was the most fulfilling experience I had at Stony Brook,” said Omar. “I got to see students of all types and backgrounds go from confusion and struggle to confident success. I often say that I’m not old enough to be proud of students who are only a year younger than I am.”

Omar has this advice for the incoming freshman class: “It’s important to be patient because the adjustment to college can take a long time. School is for learning and you’re not supposed to know much until after it’s done. The most important thing is to be comfortable asking for help. Be humble enough to know your limits and ask for guidance when you’re in trouble. When you finally gain some wisdom be sure to pass it on to the newer students.”