New Center Will Sleuth the Subatomic Ingredients of the Universe 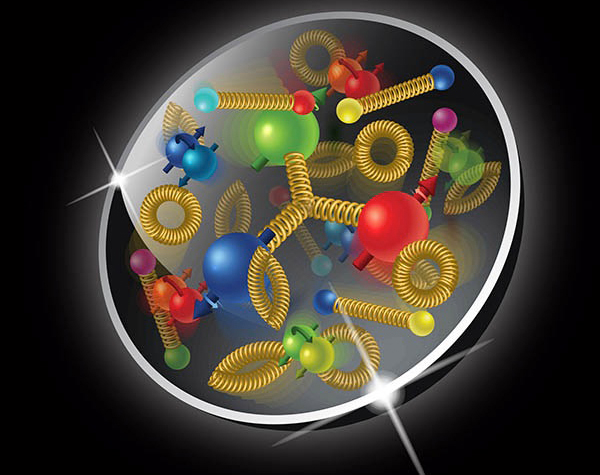 Despite centuries of studying the atom and the particles within it, the mysteries of matter continue to elude scientists. What are we really made of?

To solve such an enigma and better understand the building blocks of our universe, Stony Brook University and the U.S. Department of Energy’s (DOE) Brookhaven National Laboratory (BNL) have partnered to establish the Center for Frontiers of Nuclear Science, bolstered by a new $5 million grant from the Simons Foundation.

“The Center for Frontiers in Nuclear Science will bring us closer to understanding our universe in ways in which it has never before been possible,” said Samuel L. Stanley Jr., MD, President of Stony Brook University. “Thanks to the vision of the Simons Foundation, scientists from Stony Brook, Brookhaven Laboratory and many other institutions are now empowered to pursue the big ideas that will lead to new knowledge about the structure of everything in the universe today.”

Establishing the Center is a big step toward discovering the unknown essentials of matter for Stony Brook and BNL, which already have internationally renowned programs in nuclear physics. But before solving such a mystery, one must first know the clues. Here’s a quick breakdown.

Matter is any substance that has mass and takes up space. An atom is the smallest unit of matter. At an atom’s core is its nucleus, made of protons of neutrons — subatomic particles collectively called nucleons. Looking deeper, nucleons are made of elementary particles called quarks and gluons, and this is where the trail goes cold.

“The role of quarks and gluons in determining the properties of protons and neutrons remains one of the greatest unsolved mysteries in physics,” said Doon Gibbs, Ph.D., Brookhaven Lab Director.

Solving this mystery is the focus of quantum chromodynamics (QCD), a branch of theoretical physics that investigates how quarks and gluons interact as fundamental elements of matter.

Stony Brook and BNL’s new center is slated to become a leading international research and educational hub for QCD over the next several decades, uniting our faculty, students and researchers with BNL staff and scientists from around the world in an effort to crack the quantum case.

One key aspect of the Center’s launch is a proposed Electron Ion Collider (EIC), a powerful new particle accelerator that would create rapid-fire, high-resolution “snapshots” of quarks and gluons contained in nucleons and complex nuclei — crucial to QCD progress.

“An Electron Ion Collider would reveal the internal structure of these atomic building blocks, a key part of the quest to understand the matter we’re made of,” Gibbs said.

Abhay Deshpande, professor of experimental nuclear physics in the Department of Physics and Astronomy, has been named Director of the Center, as well as Director of Electron Ion Collider Science at BNL.

A champion of the EIC for decades, Deshpande is positioned to lead development of the collider, which was deemed highest priority for new facility construction by the National Science Foundation’s Nuclear Science Advisory Committee in an effort to strengthen and expand U.S. leadership in nuclear physics and stimulate economic benefits well into the 2040s.

Like most mysteries, collaboration is the key to success, so Deshpande is focused on uniting QCD and EIC experts from around the globe with Stony Brook students who will serve as the next generation of researchers in the field.

“Overall, I want the worldwide community of EIC enthusiasts to see the Center for Frontiers in Nuclear Science as their ‘home away from home,’ where they can come and work on EIC-related research,” Deshpande said. “My hope is that within a short time, the students at Stony Brook will have more opportunities to work with researchers at Brookhaven, and vice-versa.”

Despite the complexity of nuclear physics and related areas of study, the results of such research could reveal the most basic aspects of our very existence.

“Nuclear physics is a deep and important discipline, casting light on many poorly understood facets of matter in our universe,” said Jim Simons, chairman of the Simons Foundation. “It is a pleasure to support research in this area conducted by members of the outstanding team to be assembled by Brookhaven Lab and Stony Brook University.”

Through major funding, the Simons Foundation is bonding a partnership between Stony Brook and BNL perhaps as strong as the interaction between quarks and gluons.

“Basic science research seeks to improve our understanding of the world around us, and it can take human understanding to wonderful and unexpected places,” said Marilyn Simons, president of the Simons Foundation. “Exploring the qualities and behaviors of fundamental particles seems likely to do just that.”