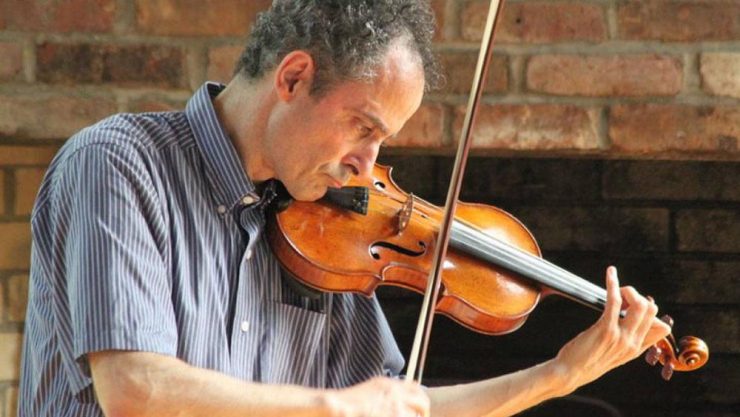 As the coronavirus pandemic sent higher education into scramble mode, it was hard for Stony Brook University’s Department of Music to keep the beat.

That’s because in music, as in comedy, timing is everything.

“Music as a program of study relies on acute listening skills, nuance in gesture and sound, and an exact awareness of time. There is no program or service that allows musicians to collaborate in real time,” said Michael Hershkowitz, Director of Community Music Programs.

Although videos of virtual ensembles — recorded individually and edited to resemble collaborative live performances — are popping up online, Hershkowitz said that “any sounds and video transmitted over the Internet create some sort of latency or delay, which makes synchronous rehearsing impossible.”

So when the pandemic forced musicians into their homes and out of classrooms and concert halls, faculty members, composers and students needed to get creative so the music could play on.

Judith Lochhead, a professor of music history and theory, teaches a course titled “Perspectives on the Performance of Music Since 1945” with Contemporary Chamber Players Director Eduardo Leandro. She described the class as “very hands-on and experiential,” involving composers, performers and music scholars.

“The pandemic required not so much a rethinking of how to teach performance practice, but rather a refocusing of content that would be useful for our seminar participants and allow us to connect up virtually with musicians around the world,” Lochhead said. “We called the whole project ‘Lemonade out of Lemons.’”

Lochhead and Leandro brainstormed and came up with a strategy: For the remaining weeks of the Spring 2020 semester, they invited guests — from Long Island, California, Pennsylvania, Taiwan and South Korea — to attend the seminar via Zoom meetings.

Zoom also figured prominently for conductor Susan Deaver, director of the University Orchestra, who came up with a solution to accommodate the orchestra’s 80 undergraduate students.

Weekly rehearsals were divided into two sessions, each beginning with a general practice during which students learned how to read full scores originally planned for the orchestra’s May 5 concert. They then divided into 12 Zoom “breakout rooms” to study orchestral excerpts by playing for one another in preparation for a final recording project.

“The University Orchestra’s teaching assistants and principal players together played a key role in making our shift from live rehearsals to an online format successful,” Deaver said.

Orchestral students also had a choice of written assignments related to orchestral music and performances. “I found it very interesting to listen to each student’s final recording project of three orchestral excerpts, which resulted in 240 recorded excerpts,” she added.

Zoom enabled graduate student Eli Yamin to teach three classes: Jazz Improvisation, Jazz and Blues Voice, and Jazz Piano. He also relied upon the platform to complete his semester as a Doctor of Musical Arts (DMA) student, while connecting with Department of Music Chair Perry Goldstein three times a week.

“From the beginning, the Zoom classes allowed us to stay connected as a community and ease some of the anxiety we felt during coronavirus,” said Yamin. “It allowed us to soldier on to continue to tighten up our musicianship and complete the semester of work.”

“We were able to source the treasure and intelligence of African American music to guide us through this uncertain time,” he said.

For Anderson, the primary challenge during the pandemic was that nobody could play together. Because of latency, “I had to change everything,” he said.

In his graduate classes, Anderson said students wrote solo pieces for each other that were recorded and played during class time. And for students in his undergraduate band, an app called Soundcloud enabled them to record a piece the group was working on before the pandemic shut down everything.

“It was quite impossible to play with the 18-piece big band, so we just had to spend our time listening. Everyone could record their parts, including improvised solos at their leisure at home, and when we met, we could all listen and change things,” Anderson said. “We rarely allow ourselves time to just listen, so this was valuable, but not the experience that playing together is.”

The inability of musicians to perform together was perhaps the most difficult aspect of the pandemic for Department of Music faculty and students.

Alan Kay, artist-in-residence, clarinetist and managing director of the Stony Brook Symphony Orchestra, recalled that his last day on campus coincided with the day the Starry Nights March concert — an opportunity for faculty and graduate music students to perform together on stage at the Staller Center — was canceled.

“It was painful to see it go — and only hours before it should have happened,” Kay said. “As a devoted teacher, I worried for all my students. Their interactions with colleagues and professors, their collaborations, their carefully designed routines — all came to an abrupt halt, and we were thrown for a loop!”

He added: “Our performance majors need to perform together, whether in chamber music, opera, orchestra or recitals, and they need ongoing one-on-one instruction on their instruments with their teachers.”

Kay said even though he has rarely taught online, he was grateful that platforms exist today that allow faculty to do so.

“Are they the perfect and complete replacement for in-person lessons, meetings and classes? No. But in private instrumental lessons and larger gatherings of students, they have been invaluable,” he said. “The learning curve was steep for me, and I recognized the need to learn quickly for the sake of my students!”

But Kay sees a silver lining.

“Since so many great musicians are at home as we all are, I’ve been able to invite guests to speak to my students and take questions. I also really enjoyed having some of our alumni join us to tell us about their successes and their post-Stony Brook lives,” he said. “The experience of being together and able to interact with each other has been gratifying and heartwarming.”

Members of the Emerson String Quartet — Stony Brook’s quartet-in-residence since 2002 — also felt the constraints of the pandemic.

“Once the pandemic became impossible to ignore in mid-March, I did all my teaching through technological platforms, either by Zoom or Skype,” he said. “I had a productive Zoom session within the Emerson String Quartet Institute. Since the students could not rehearse or play together, we came up with an alternate plan [suggested by violinist Phil Setzer]: For every piece that the Institute quartets had been working on before the lockdown, we assigned three recordings that they should listen to, evaluate and compare.”

There also were the inevitable technical difficulties during the pandemic, such as those experienced by Margaret Schedel, associate professor of composition and computer music.

“One day our power went out at home right before I was supposed to teach. I managed to run the entire class via text using my phone’s Internet connection — luckily it was a week where students had written papers on Google Docs so I was able to comment directly on their papers and also have a side chat going for questions,” she said.

But along with the adaptations for some faculty and students, some efforts fell short the mark.

“While technology granted me access to my colleagues and faculty, it simply could not make up for the live music-making that brought me to Stony Brook. It added an extra layer to the critical listening that already has to happen when teaching and learning,” said Garrett Brown, a DMA student studying bassoon. “Because of the quick shift in how the semester would continue, a lot of what I was working on and preparing for got ripped out from under me. This left me in a very odd situation.”

Brown said, however, that he found the experience to be positive in the end.

“I was able to pursue and work on projects that I never had the time for before,” he said. “For that I was grateful.”

Most of all, the pandemic made all Stony Brook music-makers aware of the invaluable human connection, as best expressed by Daniel Beckwith, a professor of conducting and opera performance.

“We as humans desire contact, being in the presence of another person. I personally didn’t change anything in the curriculum to adapt to online teaching; I was able to work on vocal issues I heard in their singing as well as diction, interpretation, artistic choices, etc.,” he said. “I was a little hesitant at first because I’ve never done online teaching, but technology taught me that one can effectively communicate with students and accomplish what would otherwise have been done in person.”