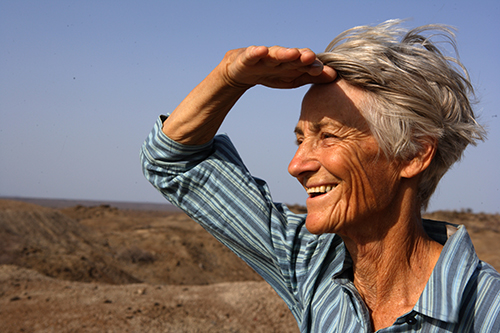 Millions of years from now, an aspiring anthropology student may brush the dust off a gleaming gold artifact we call the Hubbard Medal, and wonder to whom it belonged.

Meave is also director of field research at the Turkana Basin Institute in Kenya, a unique nonprofit initiative co-founded by the Leakey family and Stony Brook to drive research at one of the best locations on Earth for studying the origins of humankind.

The National Geographic Society awards the Hubbard Medal, its highest honor, to the world’s most intrepid explorers, discoverers and researchers in recognition of a lifetime of achievement.

Robert E. Peary won the medal first in 1906 for his unprecedented Arctic explorations. Charles Lindbergh won for making the first non-stop transatlantic flight in 1927. Neil Armstrong, Buzz Aldrin and Michael Collins won for landing on the moon in 1969. Jane Goodall won in 1995 for her 35-year study of wild chimpanzees.

Meave Leakey joins this class of fewer than 100 distinguished honorees with good reason. Thanks to her groundbreaking anthropological finds and continued dedication and inspiration to her field of research, we humans know more about our prehistoric ancestors than once ever believed.

A Lifetime of Discovery

Born in London in 1942, Meave was always interested in animals. After obtaining degrees in zoology and marine zoology from the University of North Wales, she traveled to Kenya to work for Louis Leakey at his primate research center while pursuing her PhD.

In 1969, Louis’ son (and Meave’s future husband) Richard Leakey invited her to join a field expedition investigating the newly discovered paleontological site of Koobi Fora on the eastern shores of Kenya’s Lake Turkana. That same year, she began working at the National Museums of Kenya (NMK), where she lead the paleontology division from 1982 to 2001.

Meave became coordinator of the NMK’s field research at the Turkana Basin in 1989. Among many major discoveries, her team uncovered remains of a new species and the oldest known hominin to date, Australopithecus anamensis. More than 4 million years old, those fossils revealed that bipedalism, the ability to walk upright, evolved half a million years earlier than researchers once thought.

Then in 1999, Meave’s team uncovered a 3.5-million-year-old skull and partial jaw belonging to an early hominin they named Kenyanthropus platyops. This discovery showed that a third species of Homo lived around the same time as Homo habilis and Homo erectus, significantly impacting how we view human ancestry today.

Meave is the fourth Leakey to earn the prestigious Hubbard Medal, making her family the most-awarded in Hubbard history.

Louis and Mary Leakey, Meave’s parents-in-law, both received the Hubbard Medal in 1962 for their anthropological discoveries in East Africa, including the skull of a Miocene hominoid named Proconsul africanus that lived 23 million to 14 million years ago. Further finds led the Leakeys to announce the species Homo habilis or “handy man,” believed to be a direct human ancestor.

Following his parents’ lead, Richard Leakey was honored with the Hubbard Medal in 1994. As director of the NMK from 1968 to 1989, Richard coordinated field expeditions near Lake Turkana that unearthed stone age tools dating to around 1.9 million years old and evidence of early members of the genus Homo, including skulls of Homo habilis and Homo erectus and a nearly complete 1.6-million-year-old skeleton of a Homo erectus youth.

The Leakeys share a distinguished history of partnership with Stony Brook.

Two years later, the Leakeys pitched a concept to Stony Brook administration — to develop an institute that could provide permanent infrastructure enabling year-round research in the Turkana Basin, a remote region of sub-Saharan Africa where explorers and scientists have made many major discoveries revealing human’s prehistoric past for more than 50 years.

The Turkana Basin is a hot spot for fossil discoveries thanks to its long history of concentrated tectonic activity in an area where a lake or large river has been present for 7 million years — perfect conditions for evidence of human evolution to be buried and fossilized, then exposed through erosion.

The University enthusiastically endorsed the Leakeys’ concept and together created what is now the Turkana Basin Institute (TBI). As fundraising began in 2006, Meave was appointed research professor in the Department of Anthropology and the TBI. Construction of basic facilities began in 2007, and the first full field center was completed in 2012.

Alongside her daughter Louise, Meave continues to oversee research in the Turkana Basin, making annual expeditions there to recover and study important hominin and faunal remains.

While maintaining her positions as director of field research at the TBI and research professor for Stony Brook, Meave takes a leading role in the TBI’s Origins Field School, which offers both full-semester and summer abroad programs for undergraduates of all majors to study human evolution hands-on at Lake Turkana.

Anthropology undergraduate Evan Wilson wasn’t sure he chose the right major. That all changed when he studied at the TBI under Meave Leakey.

“After hearing Meave’s personal accounts of what are now legendary fossil finds, my whole mindset changed — the passion and drive she still has for a field that seems to answer all its important questions with even more questions is truly inspiring,” said Wilson, who graduates in 2018. “Should I be so lucky to spend my life in this field, I’d be even luckier if I could conduct myself with the poise, intellect and determination that Meave Leakey has for over four decades now.”