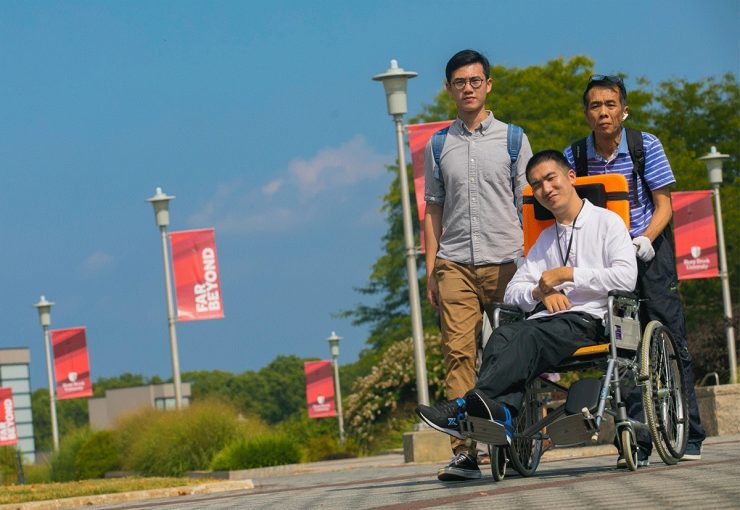 Tianchi Mo was a third grader in China when he read a child’s encyclopedia entry about Nobel Prize winner Yang Chen-Ning, who taught physics at Stony Brook University for 37 years.

He was too young to comprehend Yang’s science theory, parity nonconservation, but he understood the scientist as a source of pride for the Chinese people. In this seemingly innocent moment Mo became inspired to one day take his studies abroad to learn the lessons of intellectual heavyweights such as Yang.

In Changsha, the capital of Hunan Province, Mo went on to become a top student, consistently outperforming his peers. Because of his family’s financial circumstances, he didn’t have a computer until he was 20, but he majored in software engineering and graduated from Central South University with a master’s. He earned near-perfect scores on the Graduate Record Examinations and Test of English as a Foreign Language.

When he decided to pursue a doctorate in computer science, Stony Brook’s Department of Computer Science seemed a natural way to fulfill a childhood dream.

“I submitted an application fervently hoping to get a chance to further my academic exploration in that excellent environment full of the wisdom of giants,” Mo said. “I wanted to experience those masters’ spirits, to be nurtured by their advanced thoughts, to participate in the most forefront research and to maximize my potential.”

Mo’s preferred name is Maverick — chosen, he said, “because subconsciously I want to be a little bit of an unconventional guy and I’m a big fan of Tom Cruise’s old movie, Top Gun.” So it’s not surprising that his focused pursuit of an advanced degree is a bit more unconventional than that of most international students.

The 27-year-old’s ready smile and upbeat demeanor belies the challenge he faces every day: cerebral palsy. He cannot stand or walk without support and has difficulty with all movement, including speaking and writing. He has very limited use of his hands. As a result, he has faced many challenges that impact his studies; he said that writing and programming on the computer are at times debilitating for him. Despite this, in hopes of achieving his dream of becoming a data analyst, he persists — as he has done since primary school.

“The greatest thing my parents did when I was a child was to send me to school because they wanted me to stay with my contemporaries,” Mo said.

“Our wish was for him to live and study as normal kids do,” his father Xiaohong Mo said through an interpreter. “We didn’t feel he was superior in any way, but it was our general hope he would mingle with other kids and get what other kids have. I still feel he’s just like a normal kid, but because of his physical disability, whatever he accomplished has been more recognized. But I want to tell you a secret because I am his father and observe every day that he puts in five times more effort than other kids. For instance, if he’s writing a 300-word essay, he will spend five hours to finish it. He is unique in that he makes an extra effort to stay with his peers.”

Though Mo insists he is not an exceptionally gifted student, his test scores and his academic record tell a very different story. His academic success in China earned Mo acceptances to several top U.S. institutions including the Department of Computer Science in Stony Brook University’s College of Engineering and Applied Sciences.

Mo’s perseverance and success were covered by the Chinese media. This caught the attention of Jun Liu, vice provost for Global Affairs and dean of International Academic Programs, who reached out to Mo in February to actively recruit him to attend Stony Brook. Part of Liu’s mission as founding director of the new China Center at Stony Brook is to recruit more and higher-achieving graduate and undergraduate international students from China. Among the members of the China Center’s advisory board, in addition to Stony Brook University President Samuel Stanley Jr., is Mo’s childhood hero, Yang. This didn’t go unnoticed as Mo weighed his prestigious options for U.S. doctoral programs.

Mo made his final decision to accept admission to Stony Brook University in late March.

In early April, President Stanley led a team of key university personnel on a strategic trip to China, where they spoke to admitted and interested students and their families about the unique benefits of a Stony Brook education.

“Mo was invited to the information session in Guangzhou where he spoke about his motivation and ambition on behalf of newly admitted students to Stony Brook,” Liu said.

Mo gave an impassioned speech—in both fluent Mandarin and English—about his desire to attend Stony Brook and his determination to pursue an advanced degree overseas despite his challenges. President Stanley said he was so moved and impressed by Mo’s eloquence that he offered him an additional $8,000 through the Stony Brook Foundation to help with travel and additional expenses.

“Maverick is an exceptional young man and I saw in him someone who embodies the Stony Brook spirit of going beyond,” President Stanley said. “I wanted to make sure that everything he needed would be available to help make his transition to Stony Brook as successful as possible. It’s tough for any international student to come to a university in the U.S. to study so we really work hard to help students make that transition, and, in this case, there were a few extra things needed and I was glad to help. Also, I couldn’t help but be touched by the relationship between Maverick and his father. The chance to accommodate him and to make sure his father could accompany him was important.”

During his speech, Mo said: “The extra effort that has been made on my behalf and the care extended to me and my parents has helped in my decision-making process. The open attitude of Stony Brook towards diversity gives me numerous expectations about my PhD life.”

The next steps were to work with Mo for his arrival on Aug. 9 and throughout the next five years of his studies. Liu, who in his role focuses on understanding the needs of all international students, said Mo’s attendance at the University has become a community effort. He and his team at Office of Global Affairs and the China Center have been coordinating with other departments and units on campus to help accommodate Mo’s needs.

To that end, the Department of Computer Science is providing support to help ensure their new student achieves his potential.

“We have advised him on an academic plan that is flexible, to accommodate any unexpected hurdles he may face while adjusting to life in Stony Brook,” said C. R. Ramakrishnan, professor and graduate program director. “We’re working on the support he might need to function effectively as a teaching assistant. We’re also taking steps to integrate him into the Stony Brook CS community as quickly as possible.”

Further, the Office of Residential Community Standards has provided Mo and his father—who will take turns with his wife each year to live with him—with an accessible dormitory and a special purpose car service.

The Student Accessibility Support Center arranged a dedicated advisor to guide him with his academics and daily life. The University has also arranged for staff to help him take notes in class and to support him in other academic activities.

Another source of help are the fellow Chinese students inspired by Mo’s story.

Volunteers from the Chinese Students and Scholars Association have formed a team of about 10 to accompany him on campus and off. They’ve been helping Mo and his father with shopping and other logistics. Some even greeted them at the airport when they arrived.

One of these volunteers is Caitao Zhan, also a computer science doctoral candidate from China. She said she helps Mo because she understands what it’s like to be an international student.

“I can’t imagine the effort he made to come to Stony Brook,” Zhan said. “It will be great to know someone like him. Maybe I can learn something from him.”

All this support is appreciated not only by Mo, but also by his father, who is his son’s greatest supporter, guiding him around campus, attending class with him, feeding him, dressing him and basically serving as his arms and legs.

“I’m very proud of my son because of his perseverance and because he has gotten lots of help, not only from people in China, but also from Stony Brook and the China Center, Dr. Liu and President Stanley,” Xiaohong Mo said. “I am happy that Maverick’s situation was taken very seriously.”

In China, Mo’s attendance at the University that houses the C. N. Yang Institute for Theoretical Physics has once again made him a media celebrity.

“They all talk about his determination and dreams,” Liu said. “He inspires some of the people in China to chase your own dream and believe in outside-the-box thinking in education. Maverick’s motivation speaks volumes to his peers who want to study abroad. You have to have a dream and a goal and obviously he overcame lots of difficulties to achieve his.”

For his part, Mo said that being at SBU “is a dream come true.” He is also happy to be near New York City because of the museums. He and his father have already been to the Museum of Modern Art, and the next outing is a visit to the Egyptian collection at the Metropolitan Museum of Art.

Beyond that, Mo said, his short-term goal is to “try my best to adjust to the new environment and I hope I can successfully get my PhD. Usually I don’t think long-term because my situation is so unpredictable; I can’t plan too far away. But the options I have thought about are to maybe work in a university in China or in data science. I find software engineering to be a very promising way to change our world and shape the future.”

President Stanley said he is optimistic about Mo’s potential. “The perseverance and tenacity he’s shown in overcoming adversity is something we relate to at Stony Brook. I hope what we envision as his success here will be a beacon to others and get them interested in this University and put forward again the concept that we’re very much about inclusion and diversity and recognizing people for their abilities.”

The China Center will continue to provide updates on Mo’s life and academics via their site.

Engineering student Laiba Bilal shares her passion about renewable energy and discusses how she re-entered her career after raising three daughters.