Making Music in the Midst of a Pandemic 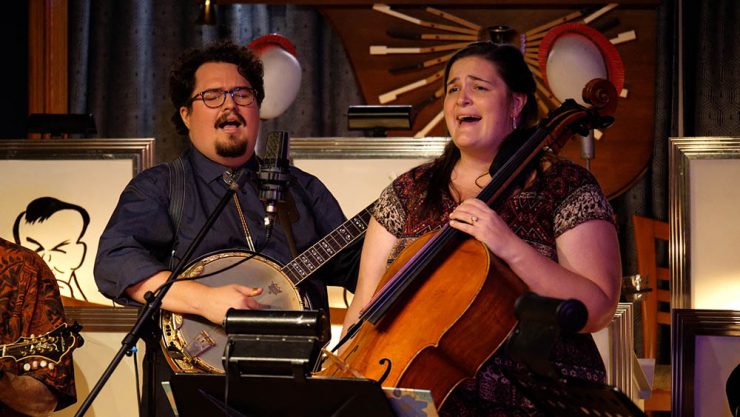 It’s hard for students to switch gears easily from real time in the classroom to virtual time in the middle of a semester. But for Taylor Ackley ’20, a postdoctoral student in the Department of Music, the coronavirus pandemic presented the ultimate challenge: defending his dissertation online.

Ackley, a composer, said he was able to meet that challenge because the primary component of his dissertation — a CD titled Hard Tellin’ — is a creative product. He defended it on Zoom in front of his dissertation committee, students and faculty from the Department of Music, and a handful of guests. A question-and-answer session followed his presentation, which was an hour long and featured a slide show.

After he was finished, “the committee members broke out the champagne,” he said.

The COVID-19 outbreak forced him into self-isolation (listen below to his instrumental composition “Cooped Up”).

But Ackley’s expertise with recording enabled him to put the finishing touches on the mixing and send the CD, his second, out to be mastered. Hard Tellin’  is due out later this year.

Ackley and his musical and life partner Alison Rowe, whose doctoral in musical arts final recital in cello performance was postponed until next semester, form the cornerstone of the project and the performing group The Deep Roots Ensemble, which merges classical chamber music instrumentation and techniques with American folk music.

Ackley and Rowe founded the group in 2015, and have since performed extensively in the New York area, the Midwest and Pacific Northwest. They also have given lecture recitals and taught workshops and masterclasses. The core group is composed of six to eight professional musicians with their own busy performance schedules; however, Hard Tellin’ featured 18 instrumentalists and was recorded live at the University’s Staller Center for the Arts.

The phrase “hard tellin’” is one that Ackley heard his rodeo cowboy brother use often, so Ackley thought it would nicely reflect his rural heritage. He lived in Washington State and Montana before moving to Long Island to attend Stony Brook.

“My family is from the rural South originally but I was born in Montana. I am definitely a country boy, and I’m the first person in my family to get a university education,” Ackley said. He joked that although he you can still hear the twang of his Southern accent when he sings he doesn’t have a discernible accent in his speaking voice any more.

The group’s debut album, Songs from the Bitterroot, was released in 2018 through Long Island-based 4Tay Inc.

Ackley said he and Rowe met while taking a master’s class in 2014 at Stony Brook. “We became friends and then started dating. We both have big, strong voices and were taking ear-training classes with [department chair] Perry Goldstein. He paired us up to sing together.”

On May 11, Ackley and Rowe performed a cello and mandolin version of the Jewish traditional song “Shalom Aleichem” they had arranged to honor Rowe’s cousin, who died due to complications from the COVID-19 virus.

That wasn’t the only pandemic setback the couple has endured. Ackley and Rowe had planned to tie the knot this June in Glacier National Park, where Ackley’s grandfather had helped build the fabled Going-to-the-Sun Road. The wedding celebration has been postponed until next year, if circumstances allow.

Ackley, a multi-instrumentalist, said he is most accomplished on mandolin, banjo and guitar, but admits that his voice is his best instrument. He grew up in a family where almost everyone played music and would pick up any number of instruments lying around during a jam session. He said he feels blessed to be playing with Long Island bluegrass legend Buddy Merriam, who has become a mentor and close personal friend and is featured on Hard Tellin’.

Rowe’s parents also had musical talent. Her mother was a cantor in her synagogue, won a Grammy, and her father is a full-time tenured professor of classical voice at the University of Wisconsin.

So where does a vastly talented couple like Ackley and Rowe put down their bluegrass roots once they both earn their PhDs?

Ackley is not all that concerned.

“Both Alison and I are hoping to get faculty positions in music,” he said. “We aspire to keep performing and we are increasingly working as a duo.”

The couple also are both teachers in the Young Artist programs at Stony Brook.

“I would be thrilled to teach music composition. I had a lot of grad students study with me at Stony Brook,” said Ackley, who has a master’s degree in composition and is finishing a second one in ethnomusicology. “I hope my future would also include songwriting and American folk music.”

“Alison is a really incredible classical cellist. She could play in string quartets and symphonies and will be sought after wherever we go. It’s a tougher sell for a folk music writer,” he said.

Bottom line: “You just have to stay flexible.”