Maitreyee Kale ’19 Immersed Herself in Scholarship and Culture 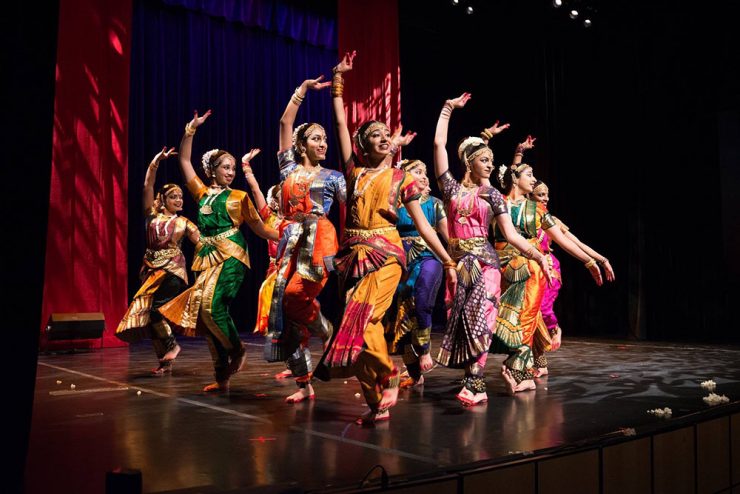 The daughter of Indian immigrants and the first in her family to attend college in the United States, Maitreyee Kale ’19 chose Stony Brook for its combination of affordability and reputation. What she didn’t anticipate was how deeply she would become involved in diverse aspects of campus life.

In the neuroscience lab, Maitreyee would study the growth of neurons and neural pathways in the brain, but it was her work with chemistry education that led to her being tapped as the Undergraduate Research and Creative Activities (URECA) researcher of the month in August 2016. She also won the coveted Chancellor’s Award for excellence in scholarship.

As a Port Jefferson Emergency Medical Service EMT, she learned how to remain calm while responding to a variety of stressful situations ranging from car crashes to assisting elders falling in their homes.

“I think my involvement in clubs was the most meaningful aspect of my college career because not only did that help me branch out and explore the world outside of college but also allowed me to meet so many amazing people while learning leadership and communication skills,” Maitreyee said.

Communication was important in Maitreyee’s household; her parents raised her to speak both English and Marathi, one of the official languages of western India from which they hailed. She picked up some Hindi, mostly through watching Bollywood movies, and elected to learn Spanish because of its growing popularity.

Dance had been an integral part of Maitreyee’s life since she was nine years old. She found ample opportunity at Stony Brook to continue that tradition.

“I was looking for any dance team to join and wasn’t expecting to find Taandava, a classical Indian team,” Maitryeee said. “Since then my team has become a family, and a home away from home. We held a charity event every year in which we showcased various dance forms and donated all of our proceeds to charity. This allowed me to do something I love and use it to do something good in the world at the same time.”

When Maitreyee learned there was a Hindu Student Council at Stony Brook, she not only joined it but also became the Council’s vice president. She championed various improvements to the club, like adding games and topical discussions to the meetings, which helped to increase attendance from three to 30 people on a weekly basis.

The following year Maitreyee was elected president and initiated a food festival showcasing Indian street foods and a collaboration with Intervarsity Christian Association and South Asian Students Association to bring together students of different faiths so they could learn about one another’s religions.

“Hinduism is ever-changing and adaptable to the times and one of the few religions that accepts other religion and their Gods,” she said.

She was instrumental in securing a space on campus for Hindu students to practice their faith and work toward establishing a Hindu chaplaincy and temple room at the Interfaith Center, an ongoing process. She served as a liaison between the Stony Brook chapter and the National Hindu Students Council Leadership Team.

“The challenges I faced — whether it was finding a space to hold an event or mishaps during the events — forced me to be creative and come up with solutions,” Maitreyee said.

But of all the experiences she had at college, Maitreyee counts her trip to Nicaragua as a volunteer with the Stony Brook Global Medical Brigades as the standout.

“Each day brought a different experience,” Maitreyee said. “One day I was performing pap smears, the next I was able to practice my Spanish skills while taking patient histories and vitals, and the third, we were building concrete toilets and showers. We worked alongside physicians in order to see more than 1,000 patients in three villages and provide them with necessary tools to take care of their health, such as medicines and dental hygiene supplies.”

“I was so grateful to be able to learn about health issues in another country and play a small part in alleviating some of those issues,” she said.