Laufer Center Dedicated on May 7 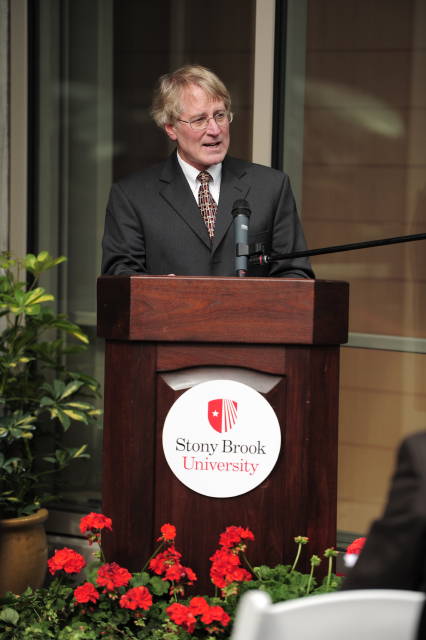 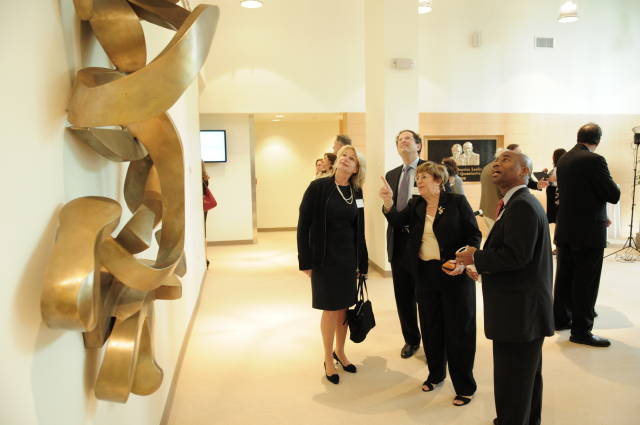 The new home of the Louis and Beatrice Laufer Center for Physical and Quantitative Biology at Stony Brook University was officially dedicated at a celebratory event on May 7. Nearly 40 extended members of the Laufer family from across the United States joined Stony Brook officials, researcher faculty and local elected representatives for the commemorative ceremony.

“The Laufer family is very pleased to partner with Stony Brook University in creating the Louis and Beatrice Laufer Center for Physical and Quantitative Biology,” said Henry and Marsha Laufer in a joint statement. “This new facility which houses the Center is not only spacious and lovely, but is also ideally located adjacent to the Life Sciences Building and across the street from the Health Sciences Center. We wish the very best to the faculty and staff of the Laufer Center and look forward to the excellent science that they will produce here. We thank Stony Brook University for all that they have done to make possible the Laufer Center.”

The Laufer Center was designed by architect Jim Braddock of the New York City architectural firm of Mitchell-Giurgola. The Center houses a 73-seat teleconferencing auditorium, a Mediascape collaborative research station and an advanced GPU + CPU computing cluster that currently gives the Center the power of nearly 9,000 computer cores.

“On behalf of Stony Brook University, we are deeply honored that the Laufer family is tying the legacy of their parents to the future of Stony Brook with the establishment of the Louis and Beatrice Laufer Center for Physical and Quantitative Biology,” said Stony Brook University President Samuel L. Stanley Jr. “There is no doubt that this state of the art center, under the direction of Ken Dill, creates a new nexus for excellence in the studies at the intersection of physics, mathematics, chemistry, computational science and biology. This is a place where we can assemble the brightest minds and provide them with the opportunity to succeed so they can discover new medicines, continue to decipher the human genome and further our understanding of how healthy biological cells work and how diseased cells fail, and we thank the Laufer family for making it possible.”

“The Laufer Center provides us with a tremendous opportunity for the development of interdisciplinary approaches to advance biology and medicine through discoveries in physics, mathematics, and computational science,” said Stony Brook Provost Dennis N. Assanis. “Stony Brook’s west campus has strengths in many of the critically important areas needed to support scientific inquiry and new discovery, such as outstanding departments of physics, applied math, computer science, chemistry, microbiology, and evolution and ecology. By partnering the strengths of these areas with SBU’s distinguished medical school, as well as Brookhaven National Laboratory and Cold Spring Harbor Laboratory, the Laufer Center will help us provide fundamental solutions to some of the most difficult medical problems facing us today — problems that will require expertise in both the life sciences and physical sciences.”

“In addition to performing research, we train PhD students, mentor postdoctoral researchers and host regular scientific seminars from distinguished outside scientists,” said Center Director Ken A. Dill, a member of the National Academy of Sciences and a past president of the Biophysical Society. He is known internationally for his pioneering work on the physical forces that give rise to the structures and properties of protein molecules. Dill has dual faculty appointments at Stony Brook in the Department of Physics and Astronomy and the Department of Chemistry.

The Center will house four to six research groups under Dill’s directorship along with Associate Director Carlos Simmerling, an associate professor in computational structural biology. It serves as a core on Long Island of scientific and educational activity in computational and physical biology. The Center’s 13 affiliated faculty lead research groups from physics, mathematics, chemistry, computer science and biology at Stony Brook, as well as Brookhaven National Laboratory and Cold Spring Harbor Laboratory.

The Laufer Center also will sponsor an interdisciplinary graduate training program, directed by David Green, a computational biophysicist and assistant professor of applied mathematics and statistics at Stony Brook.