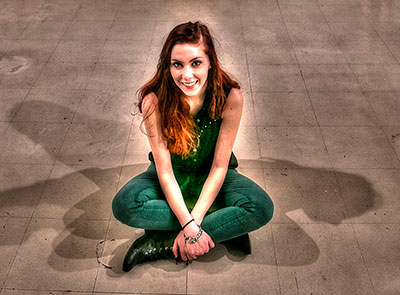 For much of history, artists have been portrayed as quirky, out-of-touch romantics.

Kristin Walter ’16, an artist who focuses on drawing and painting, is determined to defy the stereotype. The University Scholar from Bethpage, New York, insisted on a well-rounded and varied education by majoring in anthropology and psychology while minoring in studio art.

Her goal is to satisfy her need to create art while positioning herself for a career that could move her in many directions.

“It shows you how people can get along and learn from each other, and I think that is something so critical for the future, globally and individually. Seeing a small sample of it at Stony Brook makes me want to explore more.”

Familial influences opened up a variety of paths for Kristin — her paternal grandmother first encouraged her to draw; her father’s love of history made anthropology and traveling a natural fit; her mother, whose employment with German airline Lufthansa helped land her an internship in 2015, afforded Kristin a glimpse of the corporate world.

While her internship at Lufthansa took her far outside the realm of art, it have her a chance to gain some real-world skills. “Working in public relations, my writing and communication skills improved and I was forced to think critically,” said Kristin. Her responsibilities included answering inquiries from the media, writing news articles and research.

Lorena Salcedo-Watson’s Foundations of Drawing class proved to be the perfect antidote for a tough freshman course load.

“Her comments were both thoughtful and thought provoking; her critiques honest but not too harsh,” said Kristin. “She also allowed us some freedom to choose what we drew,” said Kristin.

In June 2014, Kristin further expanded her horizons by taking part in the Efrei Study Abroad Program. Efrei’s campus is located just outside of Paris in Villejuif, where she studied computer science, project management and French language and culture.

The program provided her a rare opportunity to study a culture in depth and to combine group activities with solo sojourns to regions in the French countryside, where she gained confidence in her ability to travel alone.

That newfound independence came in handy when Kristin landed her first internship at Chashama, a New York City non-profit organization that repurposes unused buildings and stores into galleries and workplaces for artists.

Another way that Kristin stays connected to art while concentrating on her double major is by working as an attendant at the Frank Melville Jr. Memorial Library’s Alloway Gallery. In addition to opening and closing the gallery, she greets visitors and answers their questions about the exhibits.

“The best part is seeing the different work our graduate students make. It gives me ideas and exposes me to new art forms,” Kristin said.

Now a senior, Kristin is studying prejudice regarding homosexuality, gender and age in Associate Professor of Psychology Sheri Levy’s lab.

“These forms of bias are all prevalent in our society. Understanding why and how people are affected by them is incredibly important to mitigating them,” said Kristin, who plans to take time off to travel, work and possibly go to graduate school after she graduates.

“I see myself doing something related to art or anthropology, possibly forensic anthropology. I’m pretty open to anything that will be engaging and interactive.”