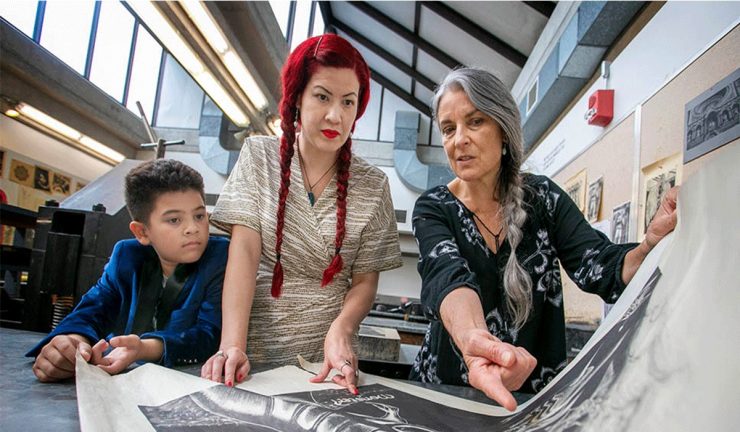 Not everything goes according to plan, or so Kiana Lom ‘21 found out.

Born in Oceanside, New York, but raised in Costa Rica, Kiana dropped out of school in ninth grade. But she always had an interest in art and expressed herself at a young age by drawing crude comics. She would pore through her engineer father’s sketches, seeking to emulate his skill but not the “rigid lines” and “technical looking graphics.”

As an adult, after returning to New York, she worked in finance and property management but admits she stopped all of her creative pursuits once she had a job. Kiana married young and gave birth to a son who exhibited autistic tendencies and until he was three her creativity was virtually on hold again. She was forced to stop working to deal with his symptoms head on. Her marriage did not last.

As time went on, Kiana longed to recoup her lost education. “By the time I decided to attend college, I felt that if I didn’t try to I would be filled with regret,” she said. When her son was old enough to attend school, Kiana was free to resume her own self-development.

As part of her healing process, she painted extensively, self-published a 100,000-word book titled Incorrigible, followed by an unpublished memoir she called Love, Lust and Luscious Lips. After a year at Suffolk Community College, Kiana enrolled in the Creative Writing and Literature (CWL) Bachelor of Fine Arts program at Stony Brook University, which was a new major when it was launched at the end of her first semester in 2018.

“I have to admit I had many doubts about coming to a STEM school for a humanities major,” she said. But those doubts have been erased. At first I thought I would feel silly going back to school at my age but everyone was very supportive. The students treated me as if I was only few years older.”

Kiana’s life changed irrevocably during an introduction to Lithography Class she took with Department of Art Professor Lorena Salcedo-Watson.

“We’ve seen eye to eye since day one,” she said. “I immediately recognized a hard-working, strong woman and this is inspirational to me. She gives me great advice and the freedom to work and explore on my own, believes in my ideas and is not afraid to right me when I am wrong.”

But it was through a happy accident that Kiana was awarded URECA (Undergraduate Research and Creative Activities) funding. Her thesis for the CWL major requires her to write a novel before she graduates.

“Professor Salcedo-Watson was looking to nominate students for the annual URECA Art Show in the Paul W. Zuccaire Gallery,” Kiana said. “I misunderstood and later that day went online to look for what she talking about and stumbled upon the URECA Research and Creative projects site. I read the word “Creative” and thought that my project would be ideal for it.”

When she told Salcedo-Watson and URECA Director Karen Kernan about her idea to apply for funding, they both encouraged her to give it a shot.  As a result, she was granted the URECA-Blum award under the mentorship of Salcedo-Watson to help illustrate the novel, which plays off of the imagery of Tarot Cards.

The idea for Kiana’s novel, titled Leap of Faith, had its origins in a dream she had where she and her mom traveled to an island in Germany. The protagonists live in a trailer park and have dead-end jobs and lives but believe they are psychic so they sell off their possessions and head for the aforementioned island.

As typical of any research project, Kiana has spent countless hours conducting visual research on anatomy, animals and their habitats, color theory, culture and places, human nature, symbolism and traditional symbols. It also requires knowledge of the Tarot and divination, which Kiana had some familiarity with from growing up in Costa Rica.

“Because Costa Rica has much indigenous influence one can see distinctly the mesh of beliefs both Catholic and paganist,” she said. “This particular strand of subculture of religion is known as Santeria, not to be confused with black magic or voodoo.”

Leap of Faith currently has two chapters drafted with an outline for 22, to be told in alternating points of view with a philosophical bent reminiscent of Paolo Coehlo’s The Alchemist.

“The first step of my process is to look at the tarot image and find symbolism I want to explore,” said Kiana. “For example, with the Hermit I wanted to work on age, wisdom and the light of the lantern. The eyes of an octopus are especially equipped to see in the dark ocean layer called the midnight zone. So I used their eyes to portray the light of the lantern.

“I next compose a picture based on what is going on in the story using these symbols, testing out the colors and shapes to suit the mood and create visually stimulating images,” she added.

Her artwork has not only been Kiana’s therapy, but her son’s.

“I used art therapy to help him,” she said. “His sensory issues attained a normal range where I could take him out in public and he wouldn’t freak out about noise, smells, or light. He acquired empathy, something which was missing before.” His medical prognosis at eight years old is encouraging; he appears to have grown out of those behaviors.

“My writing and my art are my therapy, my joy, my freedom and my release.”

Kiana’s mind is working overtime on future projects such as a triptych dealing with the theme of death and a story about a parrot with Tourette’s Syndrome and the pirate that hates him.