Kellon Belfon Finds His Way from Grenada to Prestigious Fellowship 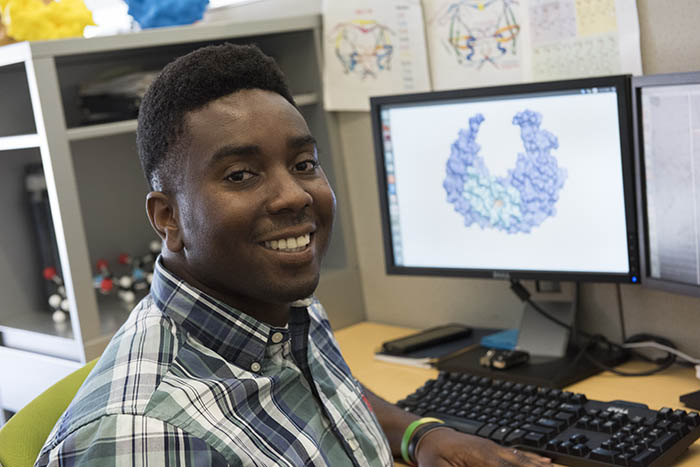 Kellon Belfon has always loved science, but the wet-lab experience was not for him. Stony Brook University provides an alternative — computational research — and that research takes place at the Laufer Center for Physical and Quantitative Biology on campus.

“Computational research involves using mathematical models to simulate the behavior of atoms,” Kellon said. “We do not necessarily deal with harmful chemicals but instead simulate them.”

A PhD student in Stony Brook’s Department of Chemistry, Kellon recently received a prestigious ACM-SIGHPC/Intel Computational and Data Science Fellowship. With the fellowship comes a $15,000 stipend, ACM membership, a travel grant to attend the Annual Supercomputing conference in Denver, networking opportunities and access to computing resources such as the ACM Digital Library.

“An award like this makes you realize that people invested in you because they see something of value and it is enough to push you past the difficult challenges in your dissertation research,” Kellon said. “I think it will also make my postdoctoral application a little more competitive.”

The Grenada native’s long road to Stony Brook began in Barbados, where he studied with Leah Ganer-O’Neale at the University of the West Indies in 2007-2008. Kellon obtained a bachelor of science degree in chemistry and biochemistry there.

“Kellon didn’t grow up in the United States or go to good schools with plenty of resources and a comfortable home,” said Carlos Simmerling, Professor of Chemistry and Associate Director of the Laufer Center.

“He grew up in Grenada following a period of civil unrest. His home, along with those of most of his friends and neighbors, was destroyed in a hurricane. He overcame adversity after adversity inspired by his wife and daughter and found strength to overcome this chaos and put his life back on track,” Simmerling said.

After he graduated, Kellon enlisted in the United States Army where he served a tour of duty from 2009 to 2013 as a preventive medicine specialist, which he describes as “a cross between a public health inspector and analytical chemist.”

While serving in the army, some of his day-to-day duties involved sanitary inspections of dining facilities, and reducing the occurrence of respiratory, aural, ocular, foodborne and waterborne diseases by performing chemical and biological tests. But his most enlightening experience was to help a small village in Iraq, where he did a one-year tour, and determined the cause of its water contamination.

It was not an easy decision for Kellon to leave the camaraderie of his fellow soldiers and the convenience of life in the army, but he eventually made up his mind to re-enter civilian life.

To aid in that transition, Kellon next attended the Brooklyn campus of Long Island University, which boasts a sizable veteran population, where he earned a master’s degree in chemistry.

When it came time to pursue his doctorate, Kellon did his homework, and chose Stony Brook University for its combination of an interdisciplinary curriculum with the personal touch. He had become fascinated with molecular dynamics simulations while pursuing his master’s; his advisor recommended he consider reaching out to Simmerling.

Professor Simmerling showed an immediate interest in having Kellon join his laboratory team, which offered a mix of coursework and research from the diverse areas of biology, physics, mathematics and computer science as well as an added enticement — computational research.

But there was much more. Kellon said another reason he enrolled at Stony Brook was the promise of support he received from his pre-entry visit to the Center for Inclusive Education, where he attended professional development workshops and interviews.

“The Center for Inclusive Education is committed to advancing diversity in academia and the scientific workforce,” said Kellon. “Its philosophy aligns with my personal goal of mentoring underrepresented students in science. That, combined with Professor Simmerling’s emphasis on family — since my wife and I are both PhD students raising a 10-year-old daughter — has made all the difference. This is a school that provides opportunities for second chances.”

And then there is the science, which obviously enraptures Kellon.

“It is intriguing that something as simple as a virus can hijack a system so complex as our cellular structure and trick it into mass-producing viruses,” he said. “We have a personal reason to be interested in working on a protein that is a pivotal drug target for HIV — a mutual friend of ours has to take a drug every day just to survive. Many of these drugs loses their efficacy over time. Currently, there is no cure for HIV and thousands of individuals are living with strains of the virus that are resistant to most drugs on the market.”

Married to science, and married to one another, perhaps the Belfon family will find the cure. 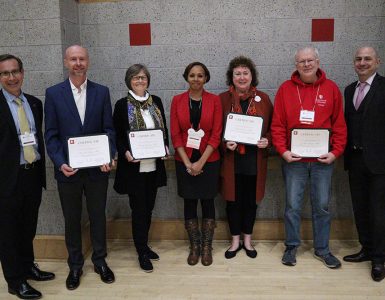