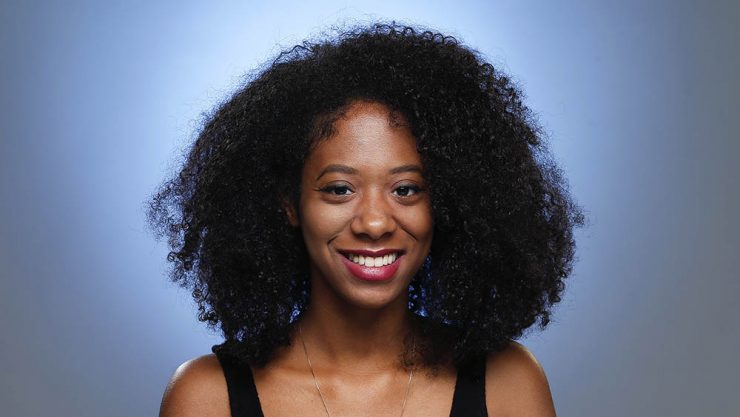 Stony Brook’s School of Journalism propelled Sonaiya Kelley ’14 to what many would consider a dream job. She reports on entertainment for the Los Angeles Times, a gig that keeps her close to the heart of Hollywood and pop culture.

“My favorite interviews for the Times have been Mahershala Ali, Daniel Kaluuya and Yvonne Orji, because they all are as lovely as they are talented,” she said. “I got to talk to several Avengers for various Marvel stories. I also interviewed the late Nipsey Hussle and have attended every awards show, except the Tonys, at least once.”

Kelley’s path to the City of Angels was far from a straight open road. After graduating from the Bronx High School of Science, she headed to Goucher College in Baltimore, studying liberal arts for two years before realizing that she wasn’t being challenged or learning anything she could carry forward. That led her to Stony Brook, where several former high school classmates attended. More specifically, Kelley found a home in Stony Brook’s School of Journalism.

Several professors there would play key roles in helping her get to the next level. Kelley said that [Executive Director] Howard Schneider’s encouragement and wealth of knowledge helped keep her going. She also credited Rick Ricioppo, assistant professor of electronic and video journalism, with helping her get through her final semester amidst a sea of self-doubts. School of Journalism co-founder Paul Schreiber, since retired, was a kind presence as she struggled through her final project.

“I truly didn’t know if I would make it to graduation,” she said. “I’ll always be grateful for their support.”

Kelley specifically called out Barbara Selvin, associate professor in the School of Journalism, as a godsend. It was Professor Selvin who sent Sonaiya information about the L.A. Times’ Minority Editorial Training program (Metpro), playing a key role in helping her achieve her current position, where she has scope to cover important stories beyond the world of entertainment. For instance, she interviewed the parents of Trayvon Martin, the African-American Florida teenager who was fatally shot in 2012 by neighborhood watchman George Zimmerman, for a docu-series about the Black Lives Matter movement.

“Sonaiya possessed the special energy that marks a good reporter and writer,” recalled Professor Selvin. “She has a boundless curiosity about people, the desire to tell stories, and the willingness – actually the need — to revise her writing again and again until it sparkled. Getting this assignment at the L.A. Times is a mark of her editors’ recognition of her talent and ability.”

After spending her whole life in New York, Sonaiya has adjusted nicely to her new life in L.A.

“The quality of life in L.A. is very high,” she said. “There’s a lot of space, the weather is always nice and there’s a laid-back vibe that isn’t possible in the New York workforce, where the mentality is to grind all the time. I like the freedom to have both a semi-glamorous job and the flexibility to pursue personal projects and hobbies on the side. I also get to talk to interesting and influential people.”

Looking back on her own academic career, Kelley had some advice for incoming journalism students.

“Don’t let a professor’s disavowal of entertainment and features writing get you down,” she said. “Everyone is not cut out to report on hard news and there is no hierarchy in the newsroom unless you subscribe to it. Cover what you want, study editorial revisions because there’s little oversight in the real world, and try to have personable experiences with interview subjects.”

Kelley said that another key part of her success was the interning she did during her school years.

“I interned since my junior year of high school and I’m sure that if I hadn’t, I wouldn’t have ended up in half the places I did,” she said. “Unpaid internships are skewed in favor of wealthy white kids but it’s important to get as much experience as possible before graduating. It is truly difficult, nigh on impossible, to land a job without internship experience unless you have connections in the industry.”

Kelley said that during her time at Stony Brook, the emphasis on multimedia studies, website building and basic photo editing equipped her for early positions as a web producer before she made the jump to reporting.

“The curriculum truly helps J-school students land a foothold in the industry,” she said. “The industry is always changing. It’s very unlikely you’ll get a reporting job right out of school, so get in however you can.”