Journalism Major John Feinberg ’16 Has All the Tools 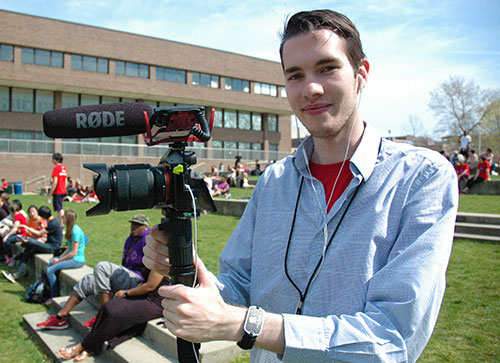 John Feinberg ’16 embodies the changing landscape of the American newsroom. Equally at home behind a video camera or on the web, Feinberg anticipates a future in journalism that embraces multiple channels and dynamic new forms of storytelling.

News organizations increasingly rely upon “one-man band types” who can singlehandedly pursue a story without the need to assign additional personnel. That’s a role Feinberg is admirably equipped to fulfill.

“I understand that for any digital media field, one skill won’t cut it. A combination of great writing as well as video editing or photography is necessary for the job market today,” Feinberg said.

His interest in journalism began while he was attending Saint Anthony’s High School in Huntington, New York, but his passion for cameras began when he was about eight years old.

“I would make movies with my older brother using my father’s video camera and action figures,” he said.

A parallel interest in cars and the automotive industry began even before he got his driver’s license. Feinberg began writing automotive reviews in 2009, blogging and publishing press releases after attending media events and developed a following.

That helped him make connections and friendships in the industry that eventually landed him internships at MTA Capital Construction, Thornton Tomasetti and TangentVector, where he became the production assistant for a YouTube automotive show called “Fast Lane Daily.”

From there Feinberg went to EPIX HD, where he managed and cataloged footage from red carpet events and interviews for upcoming movies from Lions Gate Entertainment Inc., MGM Studios and Paramount Pictures.

When he enrolled at Stony Brook in 2013, Feinberg entered the electrical engineering program, but he later discovered his true passion was writing and multimedia, so he made the switch to journalism.

Although he is largely self-taught when it comes to editing and filming, Feinberg realizes that to stay ahead of the curve he needs to experiment and learn new techniques outside the classroom. On several occasions he deployed a quadcopter, or battery-powered drone, to provide a unique perspective on certain assignments.

Long-exposure photography is another of John’s passions; he enjoys the different colors and contrasts from photographing at night compared to daylight shots.

His work, such as time-lapse photography of products created by a 3D printer at the Stony Brook University Innovation Lab and multimedia coverage of the Faculty Student Association’s Seawolves Food Show, has resulted in gigs covering popular student events, such as the Roth Pond Regatta and Earthstock.

Dave Ecker, who is the director for Research Technologies and the Innovation Lab, said that Feinberg was one of five students hired to help him open the lab. He has since become the de facto expert when videos are needed to promote the Innovation Lab’s activities.

Feinberg is adept at promoting his talents to companies and individuals alike who might be in need of their own self-promotion. Whether he is covering a story about a fire, shooting a video for the MTA about the Second Avenue Subway construction or working on an ad for a whiskey company, he uses his multiple skill sets to tackle the assignment.

“I believe that’s what makes me more marketable for marketing/PR/communications work than just a stand-alone major in those fields,” he said. “The world and job market are becoming more diverse each day. To stay ahead of the pack, you just need to keep adding skills.”

Feinberg’s professors acknowledge that his versatility will ensure his survival in a highly competitive, rapidly evolving field.

“I’ve had John as a student in three journalism classes and have been impressed by his ability to combine J-School lessons with his natural entrepreneurial streak. He seems to have broken the code,” said Professor Jonathan Friedman.

Feinberg says that his most useful journalism class to date has been Media Law, taught by Professor Carolyn Levin.

“While one class can’t necessarily protect you in all situations, it is a lot more important to me to learn the proper privacy laws in a classroom than in a courtroom,” he said.

Despite his extensive experience, John says the most important thing he needs to do is market himself. “If I can’t do that, I wouldn’t feel comfortable marketing whatever product or event the client wants me to.”