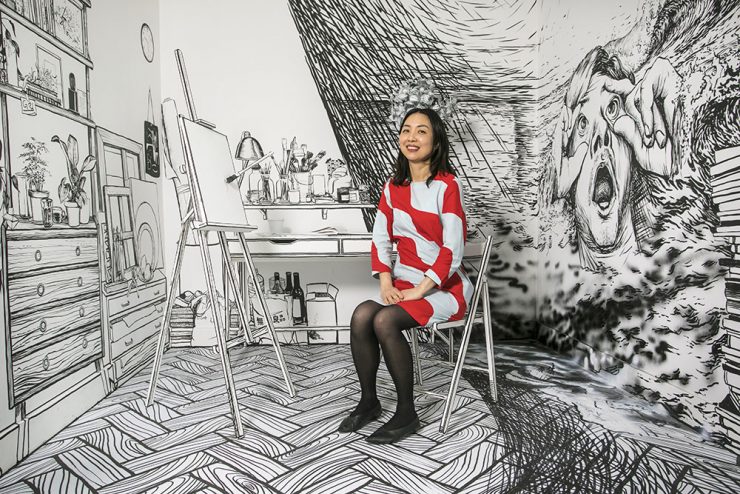 Jinyoung Jin is sitting in a place that, not long ago, did not exist.

The space was there, at the theatre lobby entrance at the Charles B. Wang Center, but it hadn’t been used for anything until Jin, the center’s Director of Cultural Programs, determined that it would be the perfect spot to house “The Studio: Through a Surrealistic Lens,” a long-term installation that invites visitors to interact with a black-and-white, three-dimensional, cartoon-like artist’s studio.

Designed and presented by the South Korea-based project group GREEM (a name that translates to “picture” in Korean), the exhibition is a favorite among students and other guests who can sit in the studio and take selfies and other photos, sharing them on social media.

The installation’s popularity illustrates how the Wang Center’s cultural programming has evolved since Jin became director in 2013.

“In the old days, museums would not allow their audience to take photos,” said Jin. “But now, selfies and social media are great tools to promote the institution, so I like to promote the Wang Center that way.”

Jin said she tries to make the Wang Center’s programs very approachable. “It has to be educational, but also entertaining,” she explained, adding that the Wang Center’s audience is as diverse as the exhibits it presents.

“The Stony Brook faculty and students are our core members, but we do have a lot of community visitors as well, and they’re coming here from all different backgrounds. It’s hard to please everyone equally, but whoever they are, I want them to take something away from our programs.”

Jin was the Gallery Director at The Korea Society in New York prior to coming to Stony Brook. A curator of modern and contemporary Asian art, Jin received her M.A in art history from Columbia University. She is currently a Ph.D. candidate in Stony Brook’s Department of Cultural Analysis and Theory.

She described seeing a retrospective of Marc Chagall when she was a teen in South Korea as an early influence that pointed her to a career in the art world.

“I always saw his artwork in a textbook; I never had an opportunity to see his work in person,” Jin said. “It was quite a journey for me to travel to a downtown museum to see that exhibit, so that was an impressive experience for me.”

Jin said she has always seen herself as a storyteller and cultural ambassador, and while she is closer to East Asia because of her background, she ensured that the variety of Asian cultures is something that is celebrated at the Wang Center.

“Whoever walks into the Wang Center to visit a lecture or see performing arts, they will see that the Center is geared to promote all Asian art,” she said. “Whether it is historical content, or addresses contemporary issues, they all have something to offer.”

While the VR technology certainly appealed to younger guests, Jin said, “there were a lot of seniors and other community members who came and experienced VR for the first time.”

The Center’s offerings have garnered significant media attention as well.  A current program, “From Mecca to Sufi Shrines: Islamic Poster Art from South Asia,” which runs through May 5, was recently mentioned in The New York Times.

Jin noted that people often don’t realize how much the Wang Center has to offer, not only in the variety of programming, but in the size of the facility itself, which includes a theater, chapel, lecture halls, the Jasmine restaurant, meeting rooms, and an abundance of gallery space.

“When I came here, the Wang Center never really maximized the space,” she said. “Right now, I’m using every single corner of every wall.”

The Zen Rock Garden is another example of how Jin took a little-used area and turned it into something special. The Japanese rock garden on the first floor was once an empty space that was kept closed to prevent it from being misused.

Now it is a popular venue that features a garden created by Gerard Senese and his wife, Hiroko Uraga-Senese, as a tribute to the appreciation of Japanese culture.

The center also features a wall adjacent to the theatre honoring the life of Charles Wang, founder of the center, who died last year. Jin recalled that he visited the center several times, participating in a tea workshop in 2017.

“I think for people who come [to the center], their life will be touched by the diverse cultural programs here, so Mr. Wang’s legacy will keep moving forward,” Jin said.

Jin is always looking to collaborate with other curators and institutions to maintain a diversity of cultures and mediums, and make the center more visible not only in the New York area but nationally and internationally. She creates one or two major exhibitions per semester, and adds to the programming with performances, lectures, workshops, film screening and festivals.

“I encourage our audiences to visit often to take advantage of all the diverse programs being offered,” Jin added. “The Wang Center is an approachable and welcoming environment, regardless of their knowledge and experience in the field of Asian culture.  It’s a gateway for some that I hope will also be a springboard.”