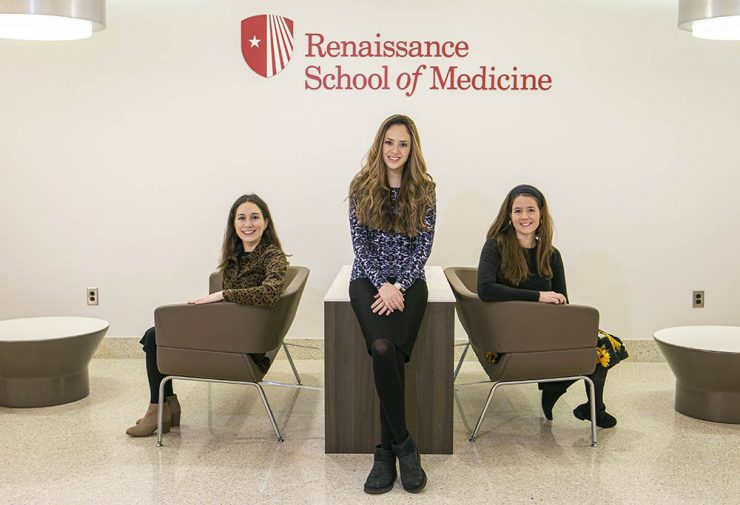 Growing up in an Orthodox Jewish family, Eliana Fine Feld never met any female doctors who shared her heritage. In fact, from the age of five her life was all mapped out for her as a future wife and mother.

Today, Eliana is an MD 2021 candidate attending the 3YMD Program in the Renaissance School of Medicine on an OBGYN track.

“My grandfather was one of my biggest inspirations to decide to pursue a career in medicine,” she said. “I didn’t know any female physicians or trainees growing up from my community — he showed me that it was possible for me, too.”

Eliana recalls that when she was a little girl, her grandfather always asked her what she wanted to be when she grew up. This was an awakening of sorts. All of her classmate’s mothers were stay-at-home moms and it didn’t dawn on Eliana that women could be both mothers and pursue careers.

“He was the most humble man I have known,” she said. “I never knew him as this prominent physician in the medical world — because he never spoke about his work or career — but as my loving grandfather.” Just this past year, Eliana visited his home and happened to see a copy of the book, Handbook of Dialysis Therapy: 5th Edition.

“I was so surprised he was the author. I had no idea he had written a book, let alone a book with five editions.”

In April 2019, Eliana decided to create an Instagram blog and document what it is like to be attending medical school as a mom. She could not have foreseen what happened next. It wasn’t long before she was meeting female physicians online — women who also went through training without the benefit of knowing what it was like to be dividing their time among faith, family and medical practice or school. In turn they would introduce Eliana to larger groups, such as a Facebook account made up of 400 women health care professionals. Her blog now has more than 8,100 followers.

“I remember thinking, ‘Where were all these women hiding? How can I meet some of them? Do any of them ever get together?’ ’’

“This all happened within 24 hours,” recalled Eliana. Within five days, she had created a website, nominated a board of directors of five physicians and an advisory board of 30 physicians to head up a 501(c)3) non-profit organization, the Jewish Orthodox Women’s Medical Association (JOWMA). “This was at the height of the measles outbreak in Brooklyn and many of the physicians on the JOWMA Advisory Board wanted to try to figure out how they could help,” she recalled.

With the help of her Board of Directors and Advisory Board, she was able to help create a free and confidential vaccination hotline in partnership with the New York City Department of Health, which provided free in-home vaccinations and offered health education and advocacy. Lines of communication were opened with the Ultra Orthodox and Hasidic Jewish communities, some of whom have limited or no access to the Internet or TV for education.

With some organizational help from Instagram account holder Dr. Mimi Knoll, a radiation oncologist, and the private Facebook group formed by Dr. Sherrie Neustein Orzel, a pediatrician, specifically for religious Jewish female physicians and trainees, Eliana’s original modest hope of five to ten women networking at a restaurant together would turn into an inaugural JOWMA event attended by more than 100 female physicians and trainees at a luxurious hall.

How does Eliana measure the fledgling organization’s success?

“JOWMA has gotten great feedback from many high school students interested in medicine, pre-medical students and physician trainees who have met other physicians and heard their stories of how they were able to achieve success in all areas of their lives,” said Eliana. “The more JOWMA features Jewish female physicians and trainees on social media and the more physician volunteers speak about their achievements at local highs schools, and the more networking events we offer for those who live in communities with very little female representation in medicine, the more women and girls will know and understand that becoming a physician is doable and something they can aspire to.”

JOWMA attracts new members via word-of-mouth and through social media, particularly Instagram, Facebook and LinkedIn. Today the advisory board has grown to 45 physicians and trainees, three of whom are Stony Brook medical students. The organization is 200 members strong and includes physicians, trainees, pre-med students and high school students from all over the United States and Canada.

On January 5, much of JOWMA converged at the DoubleTree by Hilton Newark Airport Hotel for a day of professional development, continuing medical education, mentorship and networking opportunities. Jewish female physicians who had been in practice for 20-plus years and made a significant impact in the medical world and Jewish community were recognized in an awards ceremony as well.

For the foreseeable future, however, Eliana’s life remains an intricate juggling act during the academic year, from the moment her alarm goes off at 3:45 am to the time she lays her head on her pillow again at 8:30 pm. She generally arrives at school as early as 5:15 am and takes advantage of the next three to four hours to study before classes, which last from 9 am to 3 pm. Her commute and grocery shopping take her up to 4:30 pm, when she bathes, feeds and plays with her son Ezra until her husband Moshe joins her for dinner at 7 pm. Then it’s more reading time with Ezra before turning in.

Eliana is simply doing what hundreds of Orthodox Jewish women are now quietly doing — balancing family, religion and their other calling — the medical profession. And grateful that she had found that she does not have to walk that path alone. “I truly believe that teamwork makes the dream work,” said Eliana. 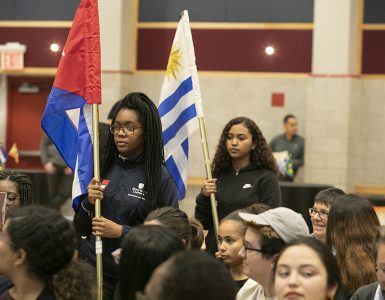 The Hospital has been named one of America’s 100 Best Hospitals™ for 2021 by Healthgrades – the only hospital on Long Island to receive this distinction for the past three consecutive years.