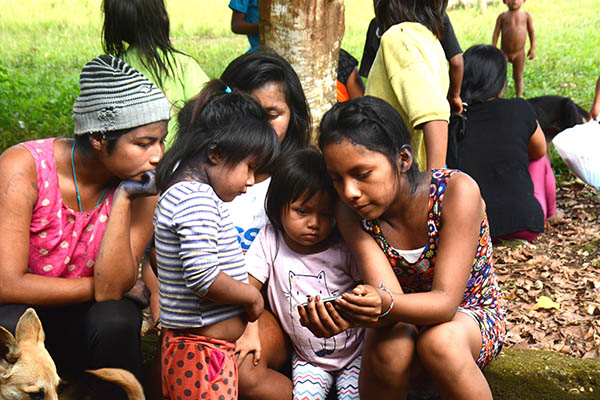 Stony Brook journalism student Mike Adams ’19 and his classmates put their journalistic principles to the test when they traveled to report on issues confronting in the jungles of Ecuador.

The 500 remaining members of the once-populous Sápara nation live in the Amazon rain forest atop land believed to be rich in petroleum. The Ecuadorean government wants to let foreign oil companies explore those potential reserves. But exploratory drilling generally leads to deforestation, which would threaten the Sápara’s way of life.

It would be easy to see this issue as a war of good versus evil, but journalists are trained to probe deeply into all aspects of every issue. Adams said he had to use a different lens than one that views this as merely a David and Goliath, might-versus-right clash.

“For the Ecuadorean government, the issue at hand is just a question of the greater good,” Adams said after returning from the June 2017 reporting trip. “Petroleum makes up half of Ecuador’s national exports and is the lifeblood of the nation. They serve more of their own people by exploiting the Amazon than they would by preserving it.”

But Adams is also sympathetic to the plight of the Sápara.

“The Sápara believe that a spirit lies in every living creature, no matter how small,” Adams said. “They believe that mankind is committing spiritual suicide by felling the rainforest and that they function as the emissary of a world without a voice. We’re not talking about the disappearance of a few hundred people. We’re talking about the death of an entire culture and a way of life.

“Ecuador has money and lawyers and the might of multinational corporations backing its interests,” he said. “The Sápara have each other and whatever meager resources they can scrape together. Besides, all attempts at description of the Amazon are equally futile. It is a humbling experience for an American, and any condescension to the Sápara you might feel is quickly swept aside by the ever-present realization that you would be dead in a day without their help.”

Journalism Without Walls participants have told stories about weighty topics, including censorship in China, chemical dispersants used in the Gulf of Mexico after the Deepwater Horizon explosion and life-threatening drought in Kenya. And they’ve covered lighter stories, too: stray dogs in Bangalore, youth baseball in Cuba, Seoul’s sybaritic subways.

Trips last anywhere from eight days to six weeks, depending on the distance travelled and the time of year. The program is offered during winter and summer sessions. Enrollment has ranged from five to 16 students. Qualifying students receive scholarships from the journalism school’s Marie Colvin Center for International Reporting, offsetting some of the cost for tuition and travel.

The students who went on the two-week trip to Ecuador–Adams, Demi Guo, Michelle Hennessy, Giovanni Ortiz and Jay Shah—were accompanied by two journalism professors, Pablo Calvi and Barbara Selvin. They examined the indigenous peoples’ efforts to develop economic self-sufficiency through ecotourism and medicine, education and voting rights, while struggling to balance tradition and change.

The group spent five days in Llanchamacocha, a community within Sápara territory accessible only by plane—or by foot or dugout canoe. The students began their days discussing their dreams with the Sápara’s leader, Manari Ushigua; participated in traditional cleansing rituals; camped on a beach along the Conambo River; and hiked for five hours through the rainforest as Manari introduced them to a dozen or so medicinal plants from the jungle’s endless apothecary.

After an idyllic few days regrouping in a Quechua village in northern Ecuador, where they hiked the 15,000-foot Imbabura volcano, made repeat visits to the open-air textiles market in the town of Otavalo and experienced a shamanic fire-cleansing ritual, the students and professors returned to Quito, the capital city, to complete their reporting.

Interviews with representatives of Ecuador’s energy sector and former government ministers, a social scientist who studies the impact of resource extraction on climate and communities, and leaders of an indigenous-advocacy group provided additional data and perspectives to the group of young journalists and their mentors.

Guided by Calvi and Selvin, the students created a mobile newsroom on the grounds of a restored villa in Quito’s Old City. During two days and a night of nearly nonstop work, they put together a website designed to report on the story of lives and challenges of these indigenous people.

“It was a complex trip to organize, but ultimately, it was so successful that we are already planning the next one,” said Calvi, who said he is hopeful that on the next trip the group could establish satellite connections that would allow students to produce and publish from remote, on-site locations.

Calvi has reported on the Sápara for more than five years and is working on a book about them that is based on his 2015 article in Believer manazine.

“Living with two unrelated groups of Ecuadoreans, the Sápara in the eastern rainforest and the Caranqui in the northern mountains, allowed us to reflect on what we take for granted, what we complain about and what we could live without,” Selvin said. She commended the students for grappling with the challenges of finding story ideas in a foreign environment, conducting interviews through a translator and putting what they observed into the context of unfamiliar history and politics.

Guo ’17, winner of the School of Journalism’s 2017 Marie Colvin/Wall Street Journal Fellowship, said: “We were on our toes, filming with the Amazon community we lived in, and wrote our drafts in the Andes. We got a taste of the finer aspects of journalism right in the field. I am grateful for the people I met and along the way and the stories they shared with us.”