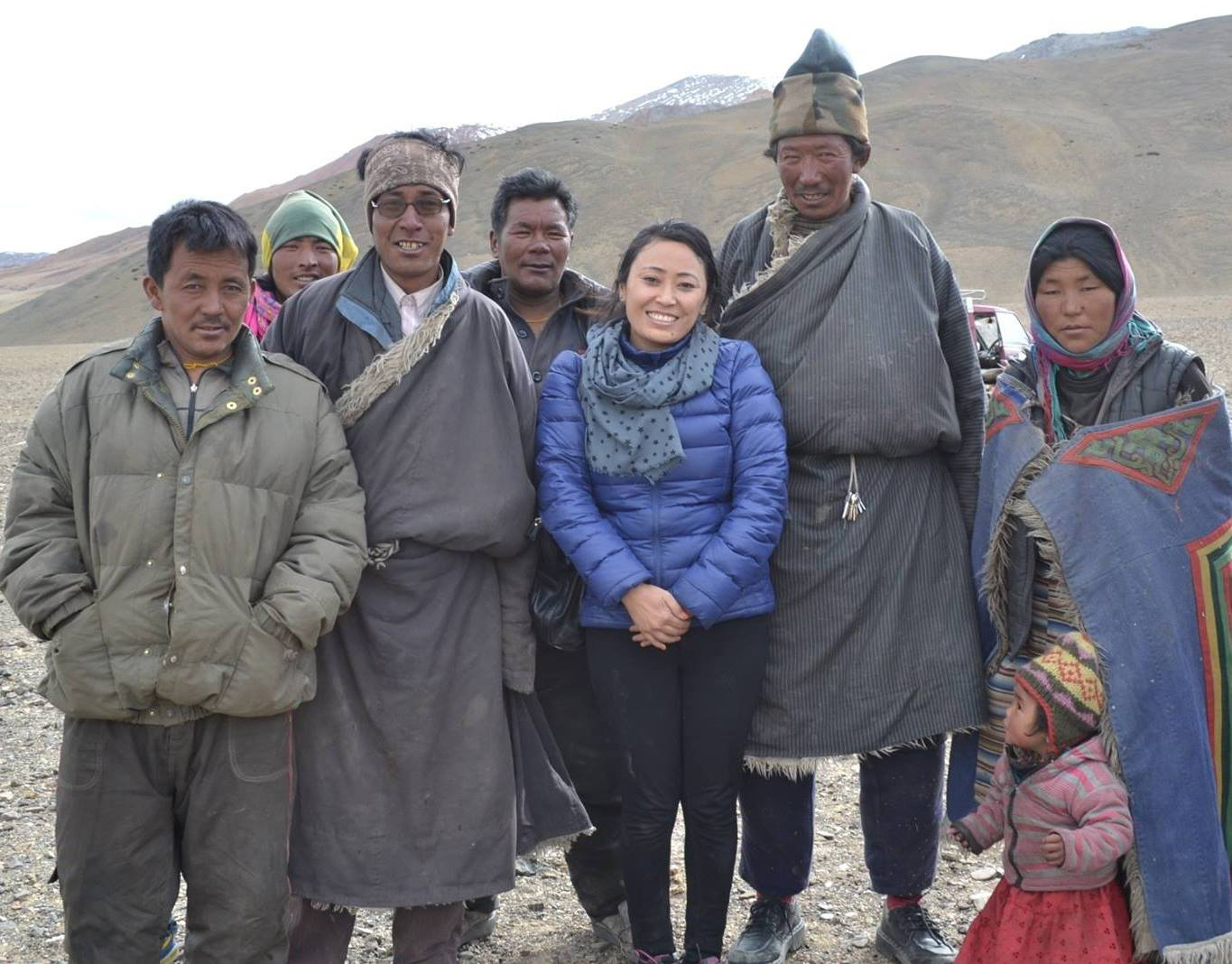 When Trinley Palmo ’12 received the 2016 Norman H. Edelman Alumni Achievement Award from the Stony Brook University Program in Public Health last May, she spoke about how she used her master’s degree in public health to improve the lives of her fellow Tibetans.

To appreciate her origins, it pays to understand world history. Trinley considers herself Tibetan but India is where she was born and is her current home. When Chinese forces occupied Tibet in 1959, her parents escaped the country, along with His Holiness the Dalai Lama and roughly 80,000 fellow Tibetans.

Trekking across the Himalayas without maps, these refugees sought freedom and many couldn’t adjust to the sultry Indian climate. Trinley’s parents were among those who settled in a remote, more temperate Tibetan refugee community in Northern India.

In his new home, Trinley’s father became a community health worker, managing the local Tibetan primary health center in her refugee camp for more than three decades of his life. Watching him treat patients and hearing the Indian villagers call her father “doctor” is what inspired Trinley to want to help her fellow countrymen.

It was just six years ago, in 2010, that Trinley set out to fulfill that dream by attending Stony Brook as an international graduate student to earn a master’s degree in public health.

Two years later, after graduating from Stony Brook, Trinley returned to Dharamsala, India, to work in the Central Tibetan Administration’s Ministry of Health as the head of the Public Health Division. The agency is responsible for the healthcare needs of more than 100,000 Tibetan refugees, according to the most recent Tibetan census data, and has a network of roughly 54 health centers throughout Tibetan refugee camps in India and Nepal.

In her role at the agency, Trinley coordinated communication with funding agencies, managed humanitarian grants and organized numerous health workshops, including health communication training for Tibetan community health workers and nurses in 2013 and 2015 — efforts that have helped to strengthen health literacy in that region, particularly among Tibetan women.

“I have traveled to more than 20 refugee camps in some of the remotest parts of India to educate community members about health issues, such as the importance of Hepatitis B screening,” she says. “I worked on a project through which roughly 2,000 Tibetan refugee children were screened and vaccinated for Hepatitis B in about 15 schools.”

In addition, Trinley supervised the publication of a crucial research report by the Tibetan Ministry of Health in 2015, which reported a high prevalence of Hepatitis B and significant treatment needs in the Tibetan refugee population.

Stony Brook University has a long-standing relationship with the Tibetan government in exile that dates back to 1990, when the 14th Dalai Lama visited Stony Brook to lecture and to receive an honorary degree.

Arthur Grollman, MD, professor of medicine and founding chair of the Department of Pharmacological Sciences, has visited Tibet on several occasions to provide medical support for hikers on high-altitude expeditions. It was Grollman who invited the Dalai Lama to visit Stony Brook, prompting then President John Marburger to award this distinguished visitor an honorary degree.

Since 1990, in a special arrangement between the University and the Tibetan government in exile, Tibetan students are given an opportunity to pursue graduate education at Stony Brook and to bring their knowledge and skills back to their community of refugees in Dharamsala. They come to Stony Brook as part of a scholarship program for refugees that is partly funded by the Fulbright Scholar Program and administered by the Tibet Fund, an educational and vocational training program.

Essential support for the program comes from Ugen Gombo, an e-resources management specialist at Stony Brook’s Frank Melville Jr. Memorial Library. Gombo, the first Tibetan ever to earn a doctorate degree in anthropology in the United States, received his degree from Stony Brook in 1985. He and Grollman review all applications for the Stony Brook scholarship program.

“As a native Tibetan, it was a pleasure for me to assist these students for 20 years in any way I could during their stay here, and I came to know them all well,” says Gombo. “All of these students returned to work in Tibetan refugee communities in various capacities.”

Gombo adds: “I am impressed by all the public health work Trinley has done in developing programs for the prevention of diseases in Tibetan refugee communities in India.”

Up to two Tibetan students every year are selected to receive tuition reimbursement if they pursue graduate studies at Stony Brook.

Tenzin Tsetan is currently enrolled in the master’s program in public health and is expected to graduate in 2018.

To date, in addition to Trinley, eight Tibetan students have graduated from Stony Brook; three with master’s degrees in public health — Tenzin Dechen ’14, Sonam Dhondup ’14 and Kunchok Dorjee ’10, who recently received a PhD from the University of California at Berkeley.

For Trinley, her career path has deeply personal origins. “The loss of my mother to cancer inspired me to pursue the study of public health, and my entire family, particularly my father, fully encouraged me to follow my interest,” she says.

Her education at Stony Brook did not come without considerable sacrifice, as she needed to live apart from her husband and loved ones for two years while she studied here. That did not affect her resolve to excel, however, as she maintained a 4.0 GPA.

All that hard work paid off for Trinley and her fellow public health alumni.

“My colleagues are doing excellent work to promote public health, and all of this could not have been possible without the historical connection between Stony Brook and the Tibetan people,” Trinley says. “The educational impact of Stony Brook has certainly reached far beyond Long Island to populations where the needs are urgent.”

Trinley is continuing her educational journey and adding valuable skills to meet the health needs of Tibetan refugees. She is now a graduate student of social work at Washington University in St. Louis, with a specific focus on children and youth trauma.

“The change that I am able to create in the lives of people here in St. Louis, particularly among the African American population, and the lessons that I am learning in reducing health and social disparities in this city give me hope for my future work in my own community and other marginalized populations,” Trinley says.