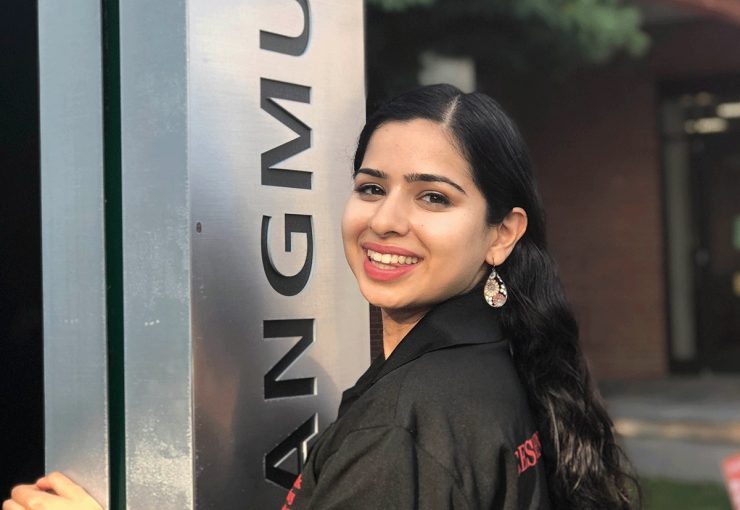 As a Sikh-American woman with an interest in digital media, Guneet Singh ’19 is determined to bring diversity to television viewers.

“I hope to work in the television industry and want to create and write shows that feature diverse characters you don’t see on screen today,” said Guneet. “I know how important representation is. When you don’t see a version of yourself in the entertainment media, it can make you feel like you don’t belong or need to change to fit the mold of what you should be.”

A Journalism major, Guneet intends to form her own production company. With that in mind she is applying for the NBC Page Program.

She is the third member of her family to attend Stony Brook, having been preceded by her sister Jasleen ’11 and her brother Harleen ‘12. “My parents love this school and encouraged me to apply,” said Guneet. “I was lucky enough to be accepted into the University Scholars program, so that made me more interested in Stony Brook. Ultimately, the affordability of the school is what won me over and I know it was the right decision for me.”

Guneet says that becoming involved on campus, the hardest initial step for many freshmen to take, has been the formula for her success at Stony Brook. This is her advice: “Say yes to attending club meetings or hang outs with new people or anything else that challenges you. College is a whole new world and there is so much opportunity here. Don’t limit yourself. You won’t grow if you stay in your comfort zone.”

Her honors include an internship at WSHU Radio, the Ruth Whitney Scholarship from Glamour Magazine , the Dean of Students Award for Excellence in Video Journalism and an internship at the Florence University of the Arts Communications Office.

As Guneet quickly learned, one open door can lead to a succession of others. And mentors usually have connections. Within the School of Journalism program, guided by Professors Jonathan Sanders, Barbara Selvin and others, Guneet tapped into a networking gold mine.

During the fall of sophomore year, she enjoyed her first internship experience, working for WUSB and learning about audio editing and writing radio scripts. Using those skills, she co-hosted “Live. Love. Langmuir,” a podcast with her fellow Langmuir Resident Assistants offering on-air advice about college matters.

Selvin recommended that Guneet reach out to New York Women in Communications, an organization dedicated to gender equity in the communications field. She filled out an online application and after several interviews was awarded the Ruth Whitney Scholarship, which funded her entire senior year.

With the scholarship came an internship at Glamour magazine. A personal highlight was shadowing the video team and watching them at work in their studio, underscoring her determination to do the same someday.

Winning the scholarship also inspired Guneet to found the SBU Communications Club, where students can take workshops and gain networking opportunities within many disciplines in the field of communications.

While performing an internship at the Florence (Italy) University of the Arts (FUA) Communication Office, Guneet was paired with the school’s alumni coordinator to produce a video for marketing the Alumni Week event. Modeling the video after Vogue’s “73 Questions,” where a correspondent shadows a celebrity, Guneet followed her project partner around Florence, visiting the city’s best-known sights. The result was a video that is currently the most-viewed video on the FUA Alumni Association page, tallying 5,100 views.

International content sharing has always appealed to Guneet. “In high school, I was very involved with my school’s Model UN and I considered a career in international relations,” she said. I felt that majoring in journalism would teach me strong communications skills. I am inspired by story tellers of all trades. From television to podcasting to writing, words move people and that moves the world forward.”