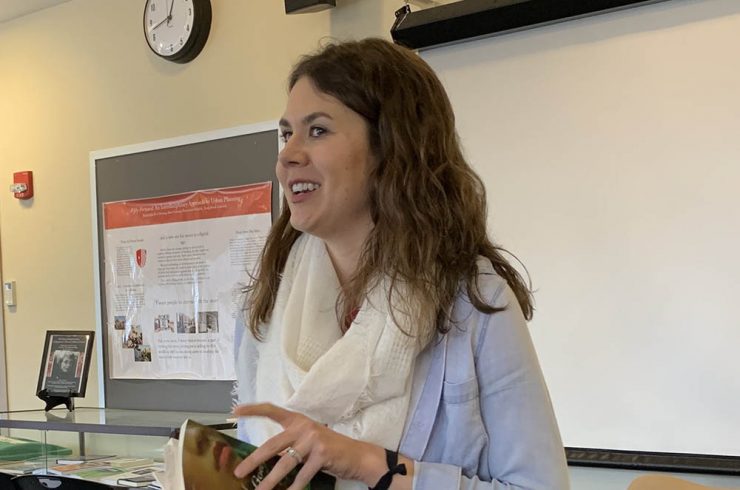 The project, titled “Mapping the Story of Long Island Water,” is funded by an $8,000 public humanities fellowship from the Humanities Centers Initiative, a statewide partnership between Humanities New York and a network of humanities centers based at nine New York State universities.

Davis will attend an orientation in August, and her project will run through summer 2021. In addition to training others, she will share her findings at Stony Brook’s Humanities Institute.

“Because Long Island relies entirely on a sole-source, nonrenewable underground aquifer system for water, the preservation of that system through legislation, corporate accountability, and individual conservation is vital to both human and environmental health,” said Davis.

She said her research has special significance for parents concerned about the quality of Long Island’s water and its effect on their children. Davis cited statistics from the Environmental Working Group, a nonprofit, nonpartisan organization dedicated to protecting human health and the environment, that revealed children drink more water per pound of body weight, compared with adults. That means they are at greater exposure and risk from harmful toxicants, especially because their bodies and brains are still developing.

Members of the working class and communities of color, who have more limited access to resources, are at greater risk, she added.

Because of its complexities, Long Island’s aquifer system — after becoming contaminated by chemicals, sewage and runoff — cannot be simply cleaned, according to Davis. She cited research from Water for Long Island, a network of groups and individuals who advocate for and defend the aquifers and groundwater resources of Long Island, that show that since the early 1990s, total water loss from the aquifer systems beneath Nassau County has regularly exceeded annual recharge.

Projections are similarly dim for Suffolk County, where only 25 percent of the county has proper sewers. As a result, time and fresh water are running out, she said.

“My project will advance water advocacy outside of the usual political and scientific avenues to include the stories and solutions of those who are most vulnerable to toxicants, and whose futures will depend on and shape policies around water wellness on Long Island — our young people,” Davis said.

Her project will be rolled out in two stages beginning this fall, when she will teach an upper-level English course titled “Local Environmental Feminisms.”

To ensure that her students feel a personal connection to today’s critical issues, the class will read Welcome to Shirley: A Memoir From an Atomic Town, by Kelly McMasters.

This text focuses not only on McMaster’s childhood memories, but also examines cancer clusters surrounding Brookhaven National Laboratory, located within 10 miles from the town of Shirley on Long Island, and the resulting petitions to connect taps in her working-class hometown to municipal water sources.

Water is a central theme, and McMasters outlines the specific, scientific data about the Long Island aquifer system in an accessible and engaging way, reminding readers that children, women and the poor living close to contaminated sites are most affected by water pollution. Welcome to Shirley will serve as an anchor text as Davis’ students begin to outline their own water memoir story-mapping projects.

Before they begin their projects, Davis hopes her students will have the chance to hear from selected experts: Adrienne Esposito, who serves as executive director of Citizens Campaign for the Environment (CCE); Assemblyman Steve Englebright (D-Setauket), who many years ago co-wrote a teaching manual for educators about Long Island groundwater; and Gilbert Hanson, Distinguished Service Professor in Stony Brook’s Department of Geosciences, who will demonstrate the sole-source aquifer system using a physical model for visualization.

The students will map waterways and potential pollution points where they live using ArcGIS software and the Survey 123 app, and will receive introductory training based on Davis’s own coaching from Maria Brown, who is Davis’ Humanities, Arts, Science, and Technology Alliance and Collaboratory (HASTAC) mentor and liaison with the aforementioned experts on water issues and cancer clusters. HASTAC is an interdisciplinary community of humanists, artists, social scientists, scientists and technologists.

The students will then be able to create their own interactive community education story maps — digital narratives that will serve as both student memoirs and studies of the importance of water in their hometowns.

The second stage of Davis’ project is inspired by the work that Long Island Moms for Clean Water (LIMCW) and other groups are already doing with elementary and middle school students. Intending to serve as a liaison between community partners such as CCE or LIMCW and local teenagers, Davis will use her experience as a former high school English teacher in a STEM academy to connect scientific data with the appeal of digital narratives.

The way Davis sees it, her PhD program has stoked her ongoing interest in environmental justice, “first through a graduate seminar, and then by working on my comprehensive qualifying exams, for which one of my lists included key historical and theoretical texts related to environmental racism, pollution and toxicants, and environmental health issues,” she said.

Most of Davis’ primary texts come from noncanonical authors, as well as local activists and artists. She said she analyzes not only novels but also memoirs, graphic narratives, film, spoken word poetry and photography — art forms that her public humanities project will incorporate.

Davis has ventured outside of her academic discipline to study real-world scientific data as a way to understand the complexities of pollution and nuclear radiation. She also serves as a production assistant to Associate Professor of English and Sustainability Heidi Hutner, who is chair of Davis’ dissertation committee and the 2015 Long Island Sierra Club Environmentalist of the Year. Hutner is filming a documentary, entitled Accidents Can Happen: The Women of Three Mile Island, and mixing the power of different media with engaging, accessible storytelling. Because of their shared interests, Hutner has been influential not only in recruiting Davis to Stony Brook but in solidifying her academic and activist pursuits.

Davis said she is intent on doing community outreach to get her messaging out of the classroom and into the public spotlight. In early 2021, if the public health conditions prove safe, she is planning to take some of her Fall 2020 students with her to various local high schools so they could introduce their own public education story maps  and help in training students and science instructors to complete their own projects.

Davis intends to work closely with interested students to generate their own community water memoirs using Welcome to Shirley as a model and mapping projects to present, along with her Stony Brook students, at the annual Port Jefferson Green Fest that takes place every June, drawing thousands of people from across Long Island.

“I do think young people are the hope and our champions,” Davis said. “I have taught several classes now with environmental justice themes, and my students are eager to learn and quick to ask questions, to speak up and out, and to demand changes.”

“Welcome to Shirley is a great example of how individuals and communities can come together to demand change at the local level,” said Davis. “As we have seen recently, protests have a ripple effect. We just have to keep the energy and the focus. I use the term ‘glocal’ with my students to help them imagine that even small, regional events — positive or negative — can have a worldwide impact.”