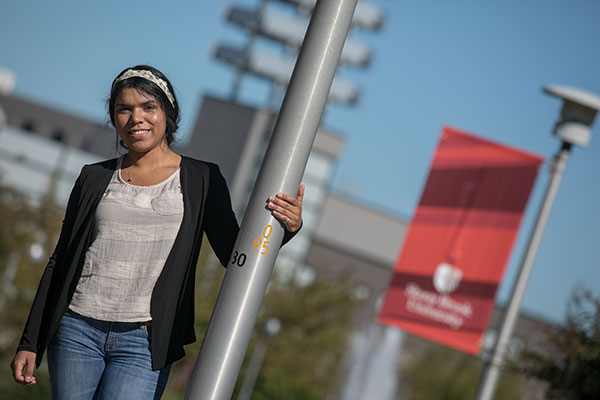 For Jessica Flores ’17, the collaborative nature of doing science is compelling — something that’s motivated her from the day she first joined the McKinnon-Rosati research lab in her freshman year through her subsequent research experiences on campus and at BNL.

As a result, Jessica was very much in her element this past summer as an REU intern at the European Organization for Nuclear Research at CERN, Switzerland, where she had the opportunity to work alongside scientists from all across the globe, characterizing the spatial trajectories of particles in the Monopole and Other Exotics Detector at the Large Hadron Collider (MoEDAL) experiment.

“There were also people from Finland, from London,” Jessica said. “I worked with a student from Singapore, met another student from Madagascar. I got to meet a lot of cool people!”

Jessica is currently a senior majoring in physics with a specialization in optics, and is a member of the Women in Science and Engineering (WISE) program, as well as the Louis Stokes Alliance for Minority Participation (LSAMP).

As a freshman, she jumped at the opportunity to join the laboratory of Professors David McKinnon (Neurobiology) and Barbara Rosati (Physiology & Biophysics) in spring 2014 to work on transcriptome analysis of gene expression changes in an in vitro model of cardiac hypertrophy. In her first three semesters of research in this molecular physiology laboratory, Jessica gained expertise in recombinant DNA techniques, was selected for a NY NASA Space grant award in summer 2014, and won a Best Presentation award at a CSTEP conference.

Now in her senior year, Jessica has returned to work under the direction of Dr. McKinnon this fall to gain some experience with a medical physics oriented project and complete the requirements for her optics specialization.

Over the span of her undergraduate career, Jessica has sought out multiple research opportunities to explore her diverse interests. In summer 2015, Jessica interned at the National Synchrotron Light Source II at BNL, working with Dr. Kazimierz Gofron, on “X-Ray Microscopy Development for Beam Characterization at the Inelastic X-ray Scattering Beamline.”

In the 2015-2016 academic year, she began working under the mentorship of Professors Yuefan Deng (Applied Mathematics) and George Sterman (Institute for Theoretical Physics), applying herself to “Global Exascale Supercomputing for Studying the Functions and Structures of Platelets” and “Adapting Mori-Zwanzig Formalism for studying the Phase Transition of Platelets.”

Earlier this spring, Jessica was selected for the prestigious University of Michigan CERN-REU program, which gave her the opportunity to work over the summer with Dr. James Pinfold and Dr. Albert de Roeck in the CERN laboratory in Switzerland on particle trajectory visualization and identification with Timepix detectors—a project she continues to make contributions to remotely working with her CERN collaborators.

“All these experiences are all very good,” Jessica said. “I’ve had coding experiences, I’ve had wet lab experiences. By the time I start a graduate program, I believe that the various skills I developed, even though they weren’t all directly related to medical physics, will help me.”

Jessica plans to pursue a PhD in physics, and a career in medical physics. She recalls the pivotal decision in freshman year to switch her major from biochemistry to physics, a decision influenced by attending an American Physical Society (APS) Conference for Undergraduate Women in Physics conference. Jessica would later on enjoy the opportunity to present one of her own projects—her BNL project on X-ray microscopy development—at the APS Conference for Undergraduate Women in Physics (Wesleyan University, January 2016). She has also presented talks and posters at the URECA annual symposium, and at BNL and CERN.

Jessica has been inducted to the Sigma Pi Sigma Physics Honor Society, and also was selected to be a part of the Women’s Leadership Initiative which matches high potential women undergraduates with top philanthropic leaders in the SB community. Jessica graduated from William Floyd HS in Mastic Beach, Long Island and is the first in her family to attend college. Her hobbies include hiking, running, cooking, gardening and violin. 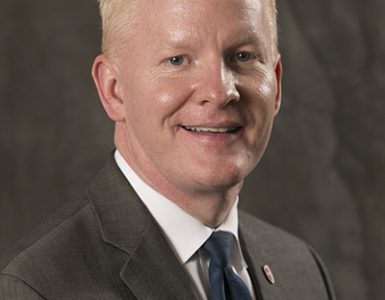 With Election Day drawing near, Student Affairs VP Rick Gatteau shared his insights on civility and students' rights to make their voices and views heard.

His research helps determine the extent human activity has increased aerosol levels in the atmosphere, how air pollution impairs health and how diseases like COVID-19 spread. 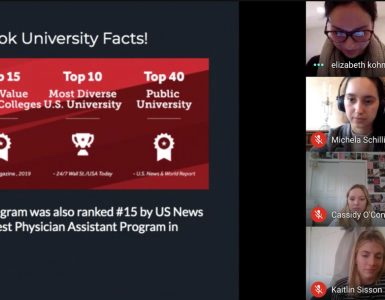 On January 13 Lynn Timko-Swaim and a group of her PA students paused their rigorous study schedules to present for students at Comsewogue High School in Port Jefferson Station.