For Alan Calder, “Blowing Up Stars is Fun” 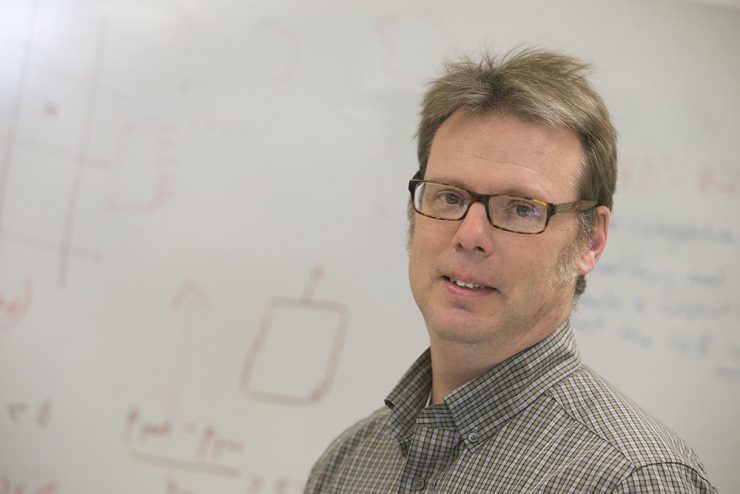 Alan Calder, associate professor of Physics and Astronomy in the College of Arts and Sciences Sciences and a core faculty member of the Institute for Advanced Computational Science (IACS), does research in nuclear astrophysics. That means astrophysical phenomena — for example, stars and stellar explosions that are powered by nuclear reactions

“I work on a particular class of stellar explosions, primarily thermonuclear supernovae,” explains Calder. “These are bright stellar explosions that you can see from other galaxies with a telescope.  They’re very bright explosions.”

These stellar events produce and disseminate heavy elements and are important for galactic chemical evolution. Calder’s research involves trying to understand the physics, build numerical models of the different parts and then put that together in one model of the stellar explosion.

“This research is just not possible without high-powered computing,” says Calder

“These capabilities enable us to make detailed models that include nuclear reactions, propagation of flames, fluid instabilities, and actually run simulations of full three-dimensional explosions,” said Calder.  “This is something that has only become possible in the last 15 years.”

The Stony Brook clusters also enable him do parameter studies – suites of simulations comparing the effects of small changes — and extract statistics from them.

“It’s a very good model of computing,” reports Calder. “Rather than running one experiment that you hope is right, you can run a lot of them and generate real statistics.”

Calder and his collaborators explore mechanisms for “blowing up” thermonuclear supernovae. One proposed mechanism occurs when a star known as a “white dwarf” begins to burn in the center. The flame slowly burns and rises toward the surface of the star, where it then transitions into a supersonic burning known as a detonation. That detonation rapidly consumes the whole star. Calder and his collaborators investigate how factors like the composition of the white dwarf affect the results of an explosion, and large-scale computing allows them to run many “experiments.”

Similar science goes on in the engine of a car, or any other combustion engine. It’s an example of a basic physics problem represented in these supernovae models.

“I really like the physics of it and you find interesting physics like the deflagration-to-detonation transition, which has real-world applications with cars and low-octane gas and the problems of detonations,” says Calder. “Validation, determining that your model meaningfully describes nature, is one of the key things. The idea of deflagration-to-detonation goes back a while and with modern computing we can actually put it into effect.”

Calder says that these types of supernovae can be standardized and thereby used as distance indicators for cosmology studies investigating the expansion history of the universe.

“If you can see how bright it seems and know how bright it is, you can measure the distance to it,” explains Calder. “Using these supernovae in the late 1990’s, for example, people realized that the expansion of the universe is increasing, and that was a major revolution in cosmology.”

The model Calder describes is now more than 20 years old, so much of his current work is to incorporate advances in our understanding of the properties of white dwarfs into the models.

“Better models allow you to better pin down the uncertainty,” he says. “It’s one piece of a much broader puzzle of things we’re trying to understand.”

Calder says that as a scientist, there’s a lot of gratification to be had by building a mathematical model of a multi-scale, multi-physics object and turning it into a simulation that provides answers and results that are reasonable when compared to what is found in nature.

“It’s an achievement that is enabled by modern computing,” he says, before adding with tongue-in-cheek, “of course, I must admit that blowing up stars is fun and gives me a sense of power.”

College of Arts and Sciences Institute for Advanced Computational Science