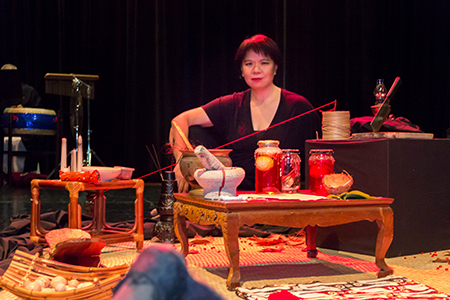 The Charles B. Wang Center is dedicated to presenting the public with a multifaceted, intellectually sound and humane understanding of Asian and Asian American cultures, and their relationship to other cultures. The Wang Center serves as a conference facility and venue for cultural events, offering lectures, workshops, film, gallery shows, festivals and more. The Center offers dozens of events and exhibits each semester. Please visit its website for the upcoming fall schedule or to sign up for the mailing list at stonybrook.edu/wang.

“Our programs offer visitors the opportunity to traverse great distances and leap across time as they experience places from ancient China to medieval Japan to contemporary Singapore,” said Jinyoung Jin,  associate director of Cultural Programs at the Wang Center.

Learn, for example, through the Origami Heaven exhibition and accompanying workshops and lectures that the Japanese art of origami is no longer considered to be only a children’s craft, but in fact influences science, mathematics and high fashion. Commemorate the end of World War II and mark the 50th anniversary of the independence of Singapore through an exhibition of the works of the artist Ren Zi and a performance by Verena Tay.

Broadening and deepening this Asian cultural journey this fall, the Wang Center is providing a one-of-a-kind people’s exhibition, “Explore History: Objects from Asia,” which features family stories and artifacts. Included among these objects will be a grandmother’s Masala brick from India, tiger balm from Singapore and a Japanese beer poster made in the 1930s. The Center will also explore Asian culinary history through chopsticks and celebrate Halloween by presenting stories of tricksters from Southeast Asia. During the time of traditional harvest festivals, the Center will resonate with the harmonized rhythms of the Beat to the Moon drum festival.

Reality Override: Mixed Media Art by Singaporean Artist Ren Zi
Zodiac Gallery • Free
In celebration of Singapore’s 50th anniversary of Independence, the Charles B. Wang Center highlights the a multitude of Singaporean cultural themes with the artist Ren Zi. He is a self-taught digital media artist who uses nature, his personal memories and Singapore’s transformation as inspiration for his art.

Earth and Sky: Captured Movement, Works by Sook Jin Jo
Theatre Gallery • Free
Korean American artist Sook Jin Jo is a multidisciplinary artist who uses found materials such as wood from discarded furniture that resonates with its previous history. Her interconnected themes include space and form, destruction and rebirth, the material and the spiritual, as well as life and death.

Explore History: Objects From Asia
Monthly Exhibits
Expand your definition of what an exhibition can be with Explore History: Objects from Asia, a rotating collaborative exhibition that examines Asian and Asian-American material culture. A collaborative exhibition curated by faculty, students and community members, Explore History gives the Charles B. Wang Center’s contributors an opportunity to display their own heritages and experiences.
September 2015 — Tiger Balm: The Legendary Pain Reliever from Singapore
October 2015 — Pre-war Beer Posters from Japan
November 2015 — Amazing World of Rice
December 2015 — Grandmother’s Indian Masala Brick

Wednesday, September 9, 5 pm followed by reception
LECTURE: Origami and the Making of Between the Folds
Wang Center Theatre • Free
Opening Remarks by Vanessa Gould, director of documentary film Between the Folds

Thursday, September 10, 2:30 pm
LECTURE: A Contemporary Art Practice From a Trans-Asian Perspective With Artist Ren Zi
Lecture Hall I • Free
Ren Zi is a product of Singapore, exposed to a multi-ethnic geopolitical environment as well as global currents in high art and pop culture. Professor Kyunghee Pyun will open a dialogue with this quirky artist who is also partly otaku, partly science geek, and partly utopian dreamer.

Verena Tay shares stories from Singaporean folktales with a twist using her quirky brand of humor to delight and encourage her audience to appreciate a different perspective on life.

Monday, September 28, 6 pm to 8 pm
FESTIVAL: Beat to the Moon!
Garden • Free
For thousands of years right down to the present day, the rise of the autumn full moon has launched harvest festivals across East Asia. This year, the Charles B. Wang Center will be celebrating as well with an evening of joyous drum performances. Professional and amateur percussionists from on- and off-campus will gather together in our outdoor garden to beat pulse-quickening rhythms and harmonies. Come and join us, whether to listen or to drum. Percussionists of all ages, musical levels and instruments are welcome.

Thursday, October 8, 2:30 pm
LECTURE: Chopsticks: A Cultural and Culinary History
Lecture Hall I • Free
Chopsticks have become a quintessential part of the Japanese, Chinese and Korean culinary experience across the globe, with more than one-fifth of the world’s population using them daily to eat. In this talk on the culture, custom and history of chopsticks, Q. Edward Wang will chart the evolution of chopsticks from a simple eating implement in ancient times to their status as a much more complex cultural symbol today.

Thursday, October 15, 2:30 pm
LECTURE: Artist Talk by Kumi Yamashita
Lecture Hall I • Free
Much of Kumi Yamashita’s artwork begins with everyday objects such as building blocks, paper, numbers and thread. While employing these everyday objects, Yamashita transforms each one into something extraordinary.

Saturday, October 24, 4 pm
PERFORMANCE: Two Tales of Tricksters from Southeast Asia
Theatre • $10 General, $5 Students/Seniors, Free for kids 12 and under
Shadow puppetry has a revered place in the rich theatrical traditions of many Southeast Asian countries. French colonizers and travelers first encountered this art form in the 18th century and brought it to Europe with them under the name ombres chinoises (literally “Chinese shadows,” though the French mainly imitated Indonesian, Thai and Burmese styles).

Wednesday, October 28, 1 pm
WORKSHOP: 12-Card Star Construction
Chapel • $10 General, $5 Students
In this workshop, participants will learn how to make an intricate construction from playing cards. The cards are both slotted and folded, so ideas from both modular origami and modular kirigami are involved. Each participant can take home their own unique construction.

Saturday, October 31 through Monday, November 2
WORKSHOP: Origami Heaven Retreat
Hilton Garden Inn Stony Brook
Complete your Origami Heaven experience with the Origami HeavenRetreat at the Hilton Garden Inn. Participate in workshops and classes on origami and be part of the origami community with artists and folders from around the globe. For fee info, visit www.origamiheaven.org

Thursday, November 12, 4 pm
FILM: People are the Sky: A Journey to North Korea
Theatre • Free
People Are the Sky, Kim-Gibson’s eighth and most personal film, connects two ideas: the search for home and the nature of ordinary people, while exploring the evolution of the Democratic People’s Republic of Korea in relation to the Republic of Korea and the USA.

Wednesday, December 8, 6 pm
PERFORMANCE: Kyogen: Japanese Medieval Comedy
Theatre • $10 General, $5 Students/Seniors, Free for kids 12 and under
The Masau-no Kai Kyogen Company was founded by Mansaku Nomura II, a Living National Treasure of Japan, and is now also led by his son Mansai II, part of a 250-year-old theatrical family line. Kyogen is one of the four representative classical theater arts of Japan, which includes Noh, Bunraku and Kabuki.