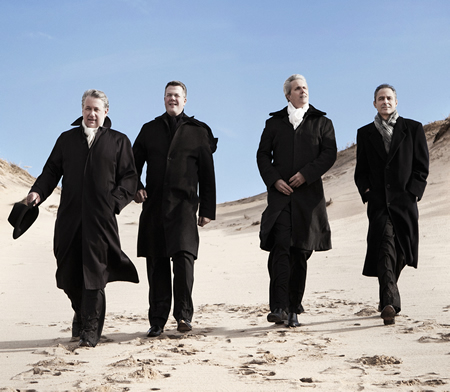 With the Emerson String Quartet long established as quartet-in-residence in Stony Brook University’s Department of Music, Long Islanders are fortunate to enjoy one of the world’s most renowned quartets performing in their neighborhood. Their next concert in the Staller Center Recital Hall is Wednesday, February 8, at 8:00 pm. Tickets are $42, available at  (631) 632-ARTS or online at www.stallercenter.com. The final Emerson concert for the 2011-12 season is scheduled for Thursday, March 15.

The Emerson selected Mozart’s last three string quartets, the “Prussian” quartets K. 575, K. 589 and K. 590, for their CD on the Sony Classical label. These string quartets were written in 1789 and 1790 after Mozart visited the royal court in Berlin, and were commissioned by the King of Prussia. The King himself played the cello and accordingly, Mozart set out to provide the cello with an especially prominent part. The release of the Emerson Quartet CD was scheduled for fall 2011 to coincide with a series of international concerts featuring these works, including performances at Wigmore Hall in London and Alice Tully Hall in New York.

Described by Time Magazine as “America’s greatest quartet,” the Emerson String Quartet has received unparalleled acclaim for concert and recording activities since its formation in 1976. This has led to recognition with nine Grammy® Awards (including two for Best Classical Album, unprecedented for a chamber music group), three Gramophone Awards and the coveted Avery Fisher Prize. Having recorded Mozart’s six “Haydn Quartets” as well as the flute quartets, the Emerson have long desired to add more Mozart to their discography. This new album sees them recording Mozart quartets for the first time in 20 years.

The Emerson String Quartet, named after the American poet and philosopher Ralph Waldo Emerson, is based in New York City. Violinists Eugene Drucker and Philip Setzer alternate in the first chair position, while Lawrence Dutton plays viola and David Finckel is the cellist.