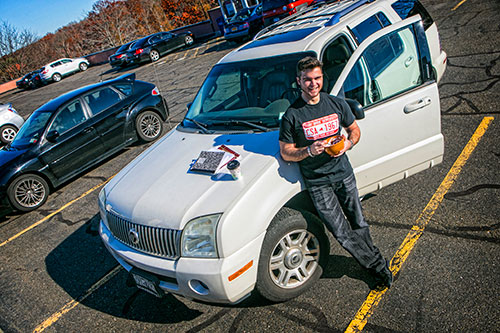 As a freshman who lived just 30 minutes from campus, James Vassallo ’17 thought he would experience Stony Brook like a stereotypical commuter student, showing up for class and heading home afterwards.

Instead, his dynamic involvement with University life entails  a schedule more demanding than most campus residents.

“I had no idea just how much this school would become part of me,” said the Bellport, New York, resident.

James joined a variety of clubs and organizations that involved a high degree of volunteerism, and to his surprise, he found the experience addictive. “I became more and more invested in this school and I wanted to push myself even further,” James said.

He adroitly balances academics, community service and an array of leadership roles with ease, maintaining a 3.76 GPA as a biology major with a concentration in neuroscience.

With each additional role, such as an Orientation Leader who talks to new students on behalf of the Commuter Student Association, James has gained confidence in his abilities and leadership skills.

“This was my most important role at Stony Brook because it opened so many doors for me and helped me gain access to not just students but also to hard-working faculty and staff members who could make a difference in students’ lives,” James said.

Some commuter students feel lost when they arrive on campus for the first time. James helps to impart winning academic and social strategies to incoming freshmen in his role as an executive member for the Commuter Student Association.

“I wanted to share not only the basics with new students, such as where to find a good meal and how to enroll in classes, but also how to make friends and discover what clubs might be best for them,” he said.

As a Student Ambassador, James broadened his knowledge of the Stony Brook community by meeting the University’s alumni and donors at open houses and information sessions.

His many leadership roles have made James an ideal candidate to serve on the President’s Council of Student Advisors, an undergraduate research group that identifies core student concerns and works with President Samuel L. Stanley Jr. to tackle those issues head-on.

But James didn’t stop there. In 2015 he became involved with the Red Watch Band Care Team, which teaches students how to avoid the consequences of toxic drinking and also tackled gender equality issues by joining the HeForShe steering committee.

“In the eyes of many males, gender equality is seen as a ‘women’s issue,’ and that’s just not true,” said James. “We are all affected by the women around us, and if something is hurting them or their success, it hurts us all as well. This movement is working to motivate students, particular male students, and empower them to intervene in instances in which gender equality is violated.”

Driven by a dream to attend medical school at Stony Brook  and become a pediatrician, James eagerly volunteered to become a member of Project Sunshine, a nonprofit organization that provides free educational, recreational and social programs to children and families living with medical challenges.

Often that means spending quality time with the young patients, doing whatever it is they want — from coloring or watching television to playing video games.

His tireless service to others and high visibility in the campus community has led to an unexpected thrill this past December:  James was selected as one of the emcees for Suffolk County Executive Steve Bellone’s second-term inauguration. As James stood alongside Governor Andrew Cuomo, Senator Chuck Schumer and President Stanley, he realized that many of Stony Brook’s best lessons take place outside of the classroom.