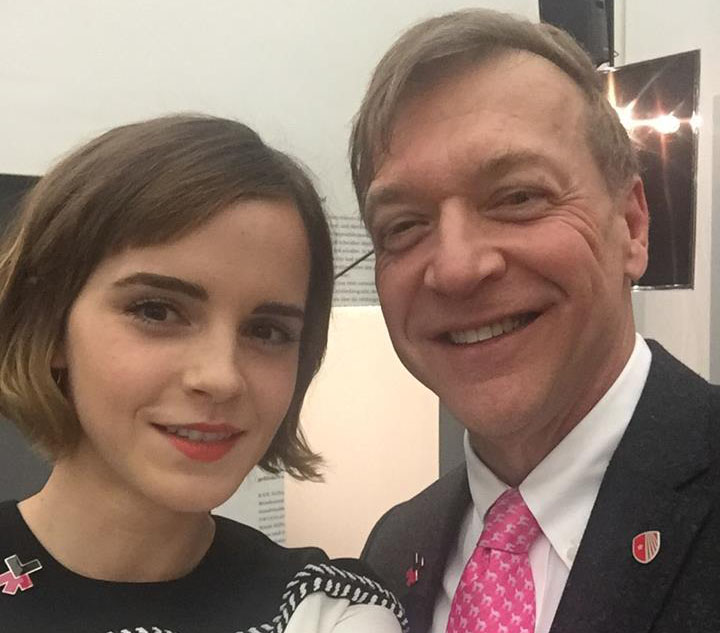 Stony Brook University President Samuel L. Stanley Jr., MD made time for a selfie with actress Emma Watson on Friday, January 22 at the World Economic Forum (WEF) in Davos, Switzerland, during a UN Women event promoting its HeForShe campaign for gender equality. Watson is the UN Women Goodwill Ambassador and President Stanley is representing Stony Brook University at the event as one of the 10 founding university champions of the HeForShe campaign.

Launched in September 2014 by UN Women, HeForShe created its IMPACT 10x10x10 program to engage 30 key leaders across three sectors—the public sector, private sector and academia—to take bold game-changing action to achieve gender equality within and beyond their institutions. HeForShe aims to mobilize one billion men and boys in support of gender equality.

President Stanley said he was excited to be there and to learn first-hand what the HeForShe Fortune 500 corporate champions are doing to ensure more opportunities for women at the highest levels.

“Today I was excited to have an opportunity to attend a panel discussion moderated by Emma Watson with HeForShe corporate sponsors,” said Dr. Stanley. “The commitment they are making to gender equality mirrors our own at Stony Brook, and hearing them talk about best practices was at once inspiring and motivating.”

When Stony Brook University became a UN Women HeForShe Impact Champion in 2015, President Stanley pledged commitment to move the needle on behalf of Stony Brook, which has now evolved into Stony Brook’s taking the lead on bringing HeForShe to the entire 64-campus SUNY System in a meaningful way.

“The gender equality issues we face on a daily basis could not be more important or timely,’ Dr. Stanley said at the time of the HeForShe 10x10x10 IMPACT Champion launch in 2015. “Among them: the role of men in gender equality; how can men become involved in the prevention of violence against women; how do we combat sexual assault and gender-based violence; and how do we promote healthy behaviors? The answers to these questions are fundamental to how we treat one another, how we work together to improve the human condition, and how we endeavor to achieve true equality.”

“We know that Stony Brook University is not free of these issues,” Dr. Stanley said. “In our role as a HeForShe IMPACT 10x10x10 University Champion, we will confront them as an institution, taking the lead for lasting change alongside our SUNY partners. It is the willingness to address these questions and improve ourselves in the process that will create that change.”

A UN Women press release about the HeForShe event in Davos can be found here.

For more information, or to get involved in the HeForShe initiative at Stony Brook University, contact heforshe@stonybrook.edu. 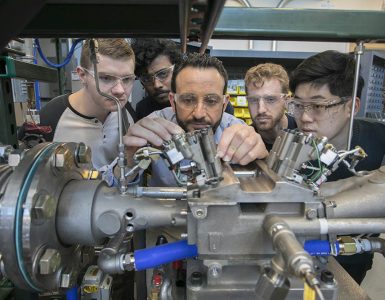 President McInnis and Provost Goldbart both expressed their deep commitment to the full spectrum of research at Stony Brook.