Alisa Rybkin ’16 Has Chemistry on the Dance Floor 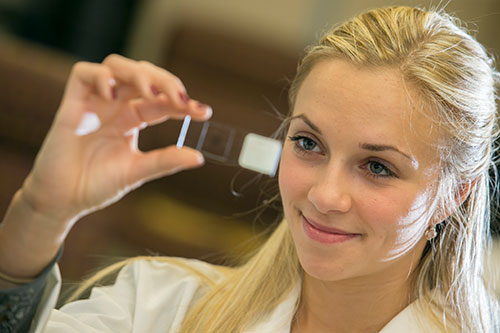 Alisa Rybkin ’16 faced a dilemma: choose an education in science or the humanities. At Stony Brook, the Staten Island-raised University Scholar realized that she could inhabit both worlds as a biochemistry major and English minor. But she still finds time for her first love: dance.

Alisa’s mom, once an ice dancer for the Russian Olympic team, was an inspiration.

“My mother put me into dance when I was 3 years old,” Alisa said. “I began with ballet but moved over to ballroom when I was 4. I didn’t start liking it until much, much later.”

For her first eight years, Alisa would be so nervous on her way to dance class that she would become physically ill. Even when she was too sick to attend school, her mother expected her to dance. From roach- and spider-infested changing rooms in a rundown Brooklyn synagogue to the Rising Stars Dance Academy in New Jersey, dance became a priority, making for an 18-hour-plus day that included bus, rail, ferry and subway connections, and ended with her mother picking her up late at night.

In spite of this punishing schedule, Alisa kept her grades high and was accepted into Tottenville High School, an institute offering an honors program in which students could take advanced science courses for college credit as early as their sophomore year. At Tottenville, Alisa had a choice of either attending the Science or Humanities Institute. She chose science and set her sights on becoming a physician.

In her freshman year at Stony Brook, Alisa was placed in honors general chemistry, but found it wasn’t a good fit. Taking her cue from her mentor, Katherine Woodford, an English major on a pre-med track, Alisa changed her major to biochem with a minor in English.

Biochemistry appealed to Alisa, she said, because of the twin lenses it affords.

“I can view metabolism, for example, from the perspective of how it supplies the body with energy, or I can study the very movement of energy from one organic component to the next as it is exploited by the body,” she said.

Research internships at New York-Presbyterian Hospital/Weill Cornell Medical College in 2013, Columbia University College of Physicians and Surgeons in 2014 and Memorial Sloan Kettering Cancer Center in 2015 only whetted her appetite to become a physician, possibly with a practice specializing in public health.

Alisa said her experience at the radiology oncology unit at Sloan Kettering ignited an interest in medicine and research, and she felt the same exhilaration she experienced when she was learning to dance. Alisa’s research at Sloan Kettering deals with cancers of the head and neck.

“My goal as an undergraduate researcher is to find ways to make cancer treatment less toxic,” she said.

These days dance takes a back seat to science. “I didn’t want a dance major,” she said. “Although I hate to admit it, I wasn’t a talented dancer — I was always the straggler. I was born with pigeon toes.”

And yet she went on to a achieve a national ranking as a representative of the Rising Stars Dance Academy and an instructor at the Fred Astaire and Stepping Out Dance Studios, both in New York City. Under the guidance of Valentin and Maksim Chmerkovskiy, both professional dancers who have been associated with Dancing With the Stars, Alisa transformed from a meek and shy personality with high hopes to a self-confident ballroom dancing instructor.

That confidence in her abilities would later help her become a patient instructor, ready to tackle difficult challenges. Alisa recalled an especially demanding situation she encountered while at Fred Astaire — teaching a student with diabetes who had several of his toes amputated, and who wanted to travel the world and dance on the Queen Victoria cruise ship.

“We started off with the foxtrot, which requires a few spins that fall within a beginner’s degree of difficulty,” Alisa said. “At first he refused to do them, claiming his amputations wouldn’t allow him to be balanced enough for the movement. We worked for several weeks during which time I taught him how to redistribute his weight along his feet. In the end, I don’t know which of us was happier!”

Alisa said that although medicine and research have become a priority, the dance world will always be a part of her.

“For now, my guilty pleasure is imagining myself as a radiation oncologist at Sloan Kettering. I’d love to make an impact in clinical research, but take it further than that,” she said. “Bringing healthcare to places where it is lacking is something I’m interested in — especially in terms of women’s health.”